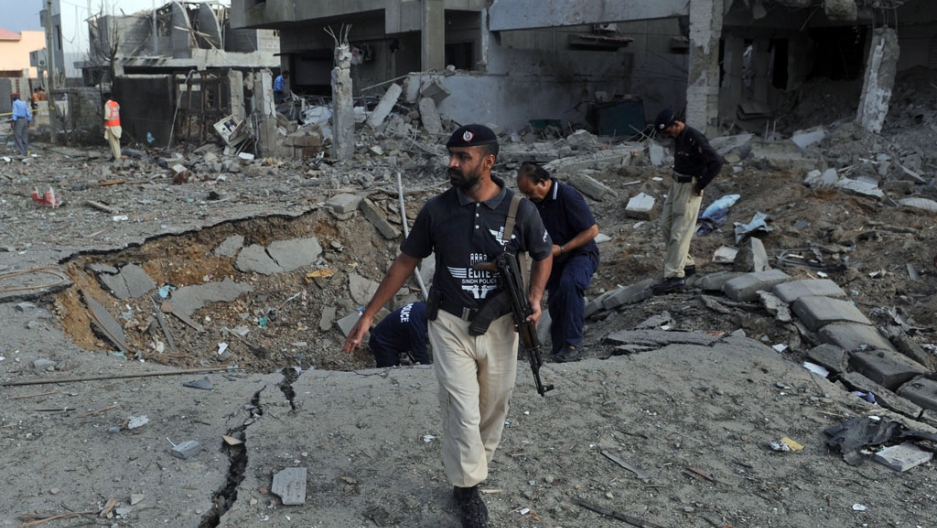 NEW DELHI, India — I had never felt so far from my home in Pakistan.

This morning, when I opened my laptop in New Delhi, where I now live with my family, I did what I often do. I checked my Facebook account.

Usually, I wade through witty retorts from my friends and pictures of their little ones. But today, a friend in Karachi had updated his status: suicide bomber targets CID (Criminal Investigation Department) officer's residence on 32nd street.

I felt a dull, bottomless ache.

What are the chances a suicide bomber would attack a residence on the same street where my mother lives? My brother and sister-in-law, too.

The Defence Housing Authority, where the attack occurred, is an upscale neighborhood home to many dignitaries and members of Karachi's elite. The development was built on reclaimed land and boasts houses with high walls and wooden gates that stretch out endlessly, street after street.

My mother's house is located on the western end of 32nd street. I was there not three months ago, shooting a documentary about classical dance in Pakistan.

I fumbled for my phone and shook a little as I dialed my mother's number. It seemed ages before I heard my mother’s calm voice, telling me she was OK.

The Taliban has already laid claim to the attack, which targeted a senior police official, Chaudhry Aslam. As the head of the counterterrorism unit of the crime investigation department, Aslam has investigated countless militant outfits and later said that he had been at the receiving end of threats from the Tehrik-e-Taliban, the group that later claimed responsibility for the attack.

The suicide bomber packed more than 650 pounds of explosives into his car and then rammed it straight through the officer’s gate. At least eight people were killed. Aslam was not among them.

The attack left a crater 8 feet deep and strewn body parts. Windows shattered in homes and schools nearby.

Six police officers outside Aslam's residence died, as did a mother and her 12-year-old son who was carrying his school bag on the long stretch of road that runs parallel to the Clifton beach, where I have traveled countless times in the 17 years I grew up there and many times since.

In death toll alone, this most recent attack is not remarkable. But I know I speak for many in Karachi’s elite enclaves when I say, the fighting between Pakistan and the Taliban touched a new audience today.

Of the thousands who have died since Pakistan joined the U.S. war on terror 10 years ago, I haven’t known any of them personally. After every attack, I rail against Pakistan's negligence and short-sighted U.S. foreign policies.

FROM NEW DELHI: Will the U.S. lose Pakistan to China?

But the truth is that there has always been a degree of separation between the blasts and me — whether they are drone strikes in the Swat Valley, or suicide bombings on public squares and shrines. They have never been so close to home, in upscale residential areas.

I had never had cause to be truly scared. Today, that changed and there is little indication that things will improve in the near future.

In this case, the mother and child were collateral damage. But the Taliban and other militants have previously and openly attacked schools and children. Just last week, militants ambushed a school bus outside of Peshawar in northwestern Pakistan, opening fire and killing four young students.

Twelve days ago, 23 people were killed in Quetta in what the Taliban has claimed as a revenge killing for the arrest of an Al Qaeda leader. The last attack on CID offices in Karachi was in November 2010, when a car bomb killed at least 30 people.

Pakistan has no resources and few friends. On the east is India with whom our relationship is filled with suspicion despite great possibility of collective exchange and trade.

On the west is Afghanistan where we once supported the Taliban who are destroying us today. In the north even China, where ties with Pakistan were recently highlighted in the wake of the raid on Osama bin Laden, seems to be tired.

Inside, we’re a nation divided and stuck. We’re confused about the kind of political system we want. We’re tied to a feudal system but we make noises about democracy. We have an all-powerful military and a president whom the entire nation calls a crook.

The vast majority of Pakistan's 160 million people are enemies of terror. And yet, we can’t find the kind of groundswell of support that a movement needs to give it force.