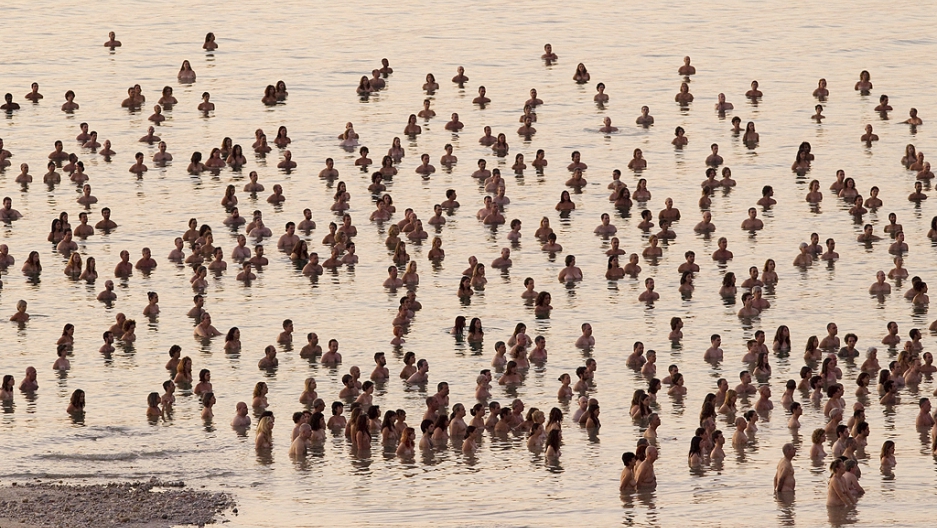 More than 1,000 nude Israelis pose for US art photographer Spencer Tunick's first Middle East mass shoot on September 17, 2011 on the shores of the Dead Sea, the lowest spot on earth which experts warn it could dry out by 2050 unless urgent steps are taken to halt its demise.
Credit: JACK GUEZ
Share

A nude photo shoot involving hundreds of people on the shores of the Dead Sea created a minor stir among conservatives in Israel this weekend, according to Israeli press reports.

Around 1,200 Israelis stripped naked at the Dead Sea on Saturday for a photo project by renowned photographer Spencer Tunick.

“Everyone was attired the same, wrinkles and all, and no one could care less. They just came in different sizes,” wrote photo shoot participant Roni Levin in Haaretz.

Tunick's shoot was part of an awareness campaign to draw attention to the dwindling waters and other environmental problems near the Dead Sea, a slowly receding salt lake that is also the lowest point on earth.

Many experts believe that the Dead Sea, which is evaporating at a rate 3 vertical feet every year, could go completely dry in the next few decades.

Here are some (warning: nude) photos from the Dead Sea shoot.

Tunick has documented the human form in public - usually while naked - across several continents, with video and photography since the 1990’s.

The Dead Sea photo shoot this weekend was Tunick's first such project in the Middle East.

(More from GlobalPost in Jerusalem: The end of Israel as we know it?)

And some conservatives in Israel described the controversial project as “debauchery”.

A local city council near the Dead Sea withdrew partial funding for the photo shoot at the last minute amid criticism, according to the Jerusalem Post.

The Dead Sea is linked to the sites of the biblical Sodom and Gomorra, and one conservative Israeli lawmaker compared the photo shoot to that ancient debauchery.

But the 43-year-old Tunick has praised Israel as the only country in the Middle East with the freedom for one of his trademark nude shoots.

“For me, a country that allows the nude in art, in public space is some place that’s very progressive, very open, and very caring, and very dignified,” said Tunick, according to Agence France-Presse.

Participants in the shoot - who were mostly males between the ages of 18 and 77 - all seemed to agree.

“I am doing it because I believe strongly that Israel is the only country in the Middle East that could have a mass-nude photo shoot,” Raffe Gold, a 25-year-old participant in the event, told the Jerusalem Post.