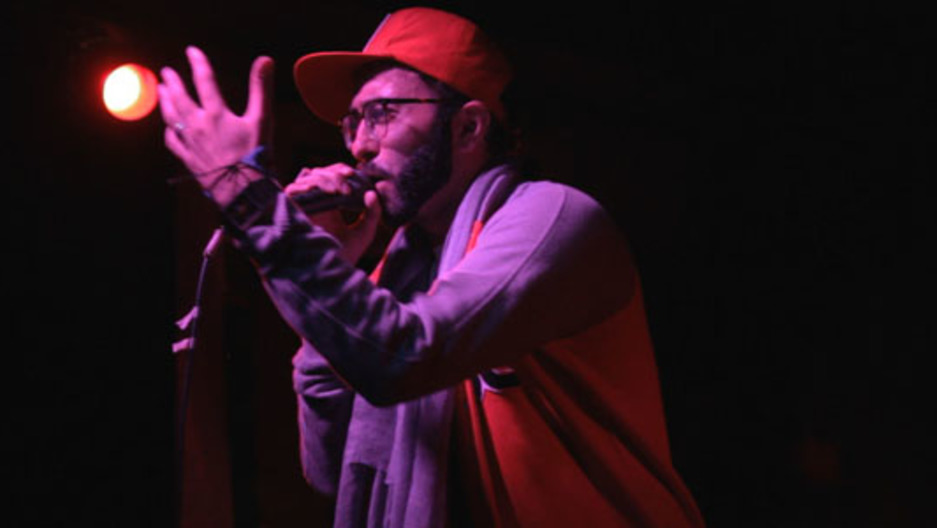 The Narcicyst at The Middle East restaurant in Cambridge, MA. (Photo: Kavita Pillay)

Born in Dubai to parents from Basra, Iraq, hip-hop artist Yassin Alsalman was raised between the United Arab Emirates and Canada.

As an MC he goes by the name "The Narcicyst" and has performed with the likes of Public Enemy, Talib Kweli and Kanye West. His work focuses on the experiences of Arabs in North America, and with album titles such as "Stuck Between Iraq and A Hard Place" and "Fear of an Arab Planet," Alsalman is making a name for himself in the world of Arab hip-hop.

The venue for The Narcicyst's first Boston-area performance happens to be The Middle East, a renowned club in Cambridge, MA.

It's close to midnight by the time Narcy, as he is sometimes called, takes the stage. The audience ranges from college students and hip-hop fans to middle-aged peace activists.

A core group of longtime Narcy fans are also in attendance, and for them, The Narcicyst's lyrics and sense of humor convey the complexity of their own reality: that of being Arab, Muslim and Western in a post-September 11 world.

Case in point, his tongue-in-cheek music video about racial profiling and airport security titled "P.H.A.T.W.A." The title combines hip-hop slang and the Arabic term for an Islamic legal opinion.

Set in an airport, it features the following exchange between Alsalman and his friend and fellow MC, Yushua Scott, who is black.

Scott: Yo Narcy, do you really think they're watching us? I ain't tryin' to get searched, see. Who do you think they're going to harass more, man, me or you?

Alsalman: Obviously me, dawg. You know Iraq is the new black.

"The second meaning is, being that we are public enemy number two after what happened to African-Americans — and it's still happening to African Americans — when we were going through the highest rate of profiling and stereotyping, my black friends would always joke with me and say, 'Whew! Thank God it's not us anymore!'"

Filmed in 2009, the music video took on new meaning in late 2010, when Alsalman was held up by US customs officers while en route from Montreal to Washington D.C., where he was scheduled to speak at a conference on Arab hip-hop at the United States Institute of Peace.

It was a case of life imitating art, even while his art parodied life.

Now 29 years old, Alsalman's family immigrated to Canada in 1993, where he was first introduced to hip-hop artists like WuTang Clan and NWA.

Along the way, Alsalman earned a bachelor's degree in communication studies and political science as well as a master's in media studies. As part of his thesis, he recorded an album titled "Fear of an Arab Planet" with a group of Arab-American MCs.

In addition to maintaining a regular performance and speaking schedule, Alsalman also co-teaches a course titled "Hip Hop: Past / Present / Future" at Concordia University in Montreal. He uses hip-hop as a way to explore a range of issues, including race, colonialism, ghettos, religion, the history of art and personal identity.

"Growing up and being born between the East and the West has helped me to understand that nationality is not the end all, be all of identity," he says. "Identity is really about what's inside you and who you are as an individual more than where you're standing and what land you're on."