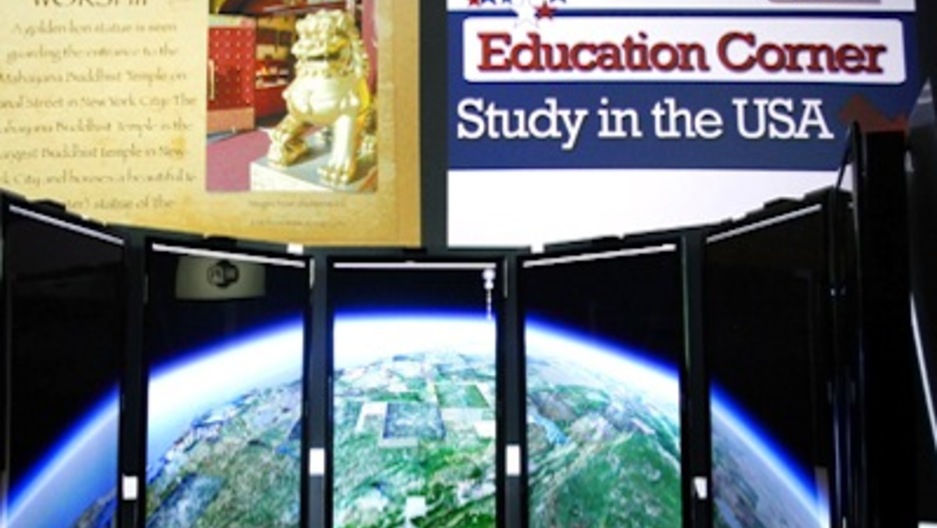 Photo of the @america Center in Jakarta. (Photo: Sandy Hausman)

Story by Sandy Hausman for PRI's The World. Listen to audio for full report.

In many countries, US diplomats try to build goodwill by sponsoring American artists and cultural events, but security at the embassies is tight, making it difficult to host big groups. The state department also wants to influence young people, but traditional embassy events rarely appeal to them. That's why the US created a multimillion dollar space for people under 30 in Jakarta's upscale Pacific Place mall.

The cultural center is called @america -- a name chosen because diplomats in the world's most populous Muslim country thought it would appeal to the technical savvy young people, while conveying a measure of respect.

But there's nothing humble about this high-tech place. Six projectors run seven days a week, 11 hours a day, flashing hundreds of colorful images: Michael Jordan and Mickey Mouse, Martin Luther King, and Elvis, the skyline of Chicago and the St. Louis Arch.

In one corner of the 1,700-square-feet space, visitors who missed it can experience President Barack Obama's visit to Jakarta, and the speech in which he reminisced about his childhood here.

Each day, an average of 300 people come to the center to hear a lecture, take part in a teleconference, view a film or enjoy a concert. Recently, about two dozen university students gathered to discuss the American classic "Huckleberry Finn."

"The place is cozy, and the people are so friendly," says English literature major Dian Miyfitri. She comes often to hear talks, to lounge in bean bag chairs and to use one of 60 iPads loaded with information about America and university programs for international students.

"The iPad check out is probably one of the more popular things," says Rebholz. "iPads here are extremely expensive, so people appreciate being able to borrow one and to use our high speed Internet."

If Apple is the ambassador at @america, Google is the tour guide, offering visitors a virtual trip on board Liquid Galaxy, a machine which relies on seven screens, seven computers and a massive database of digital satellite images. After checking out 3D images of the Empire State Building or the Statue of Liberty, visitors can "fly" to Disney World, the Golden Gate Bridge, Niagara Falls, the Grand Canyon, the White House or other popular tourist attractions.

Before entering @america, visitors must walk through a metal detector and place their possessions on a conveyor belt to be X-rayed, but in a country that has had its own brush with terrorist bombings, few people complain. "It's kind of a hassle, but it's okay," says college student Gusty Ramadhana. "It's for our safety."

The center cost $5 million to build and $3 million a year to operate, but some officials at the US State Department consider it a great investment.

"Engagement is changing, and a lot of that change is now coming about through social networking and technology," says Dawn McCall, coordinator of international information programs. "Indonesia is a very tech savvy country — particularly the young people there, so we felt it was a great laboratory for us to try a lot of different things."

She adds that @america could be a model for 21st century diplomacy – using the excitement of American culture and technology to spark discussions of more serious issues. If it's deemed a success in Indonesia, the US could open similar centers in other countries where it hopes to build stronger relationships.

Sandy Hausman traveled to Indonesia as part of a fellowship with the International Reporting Project.