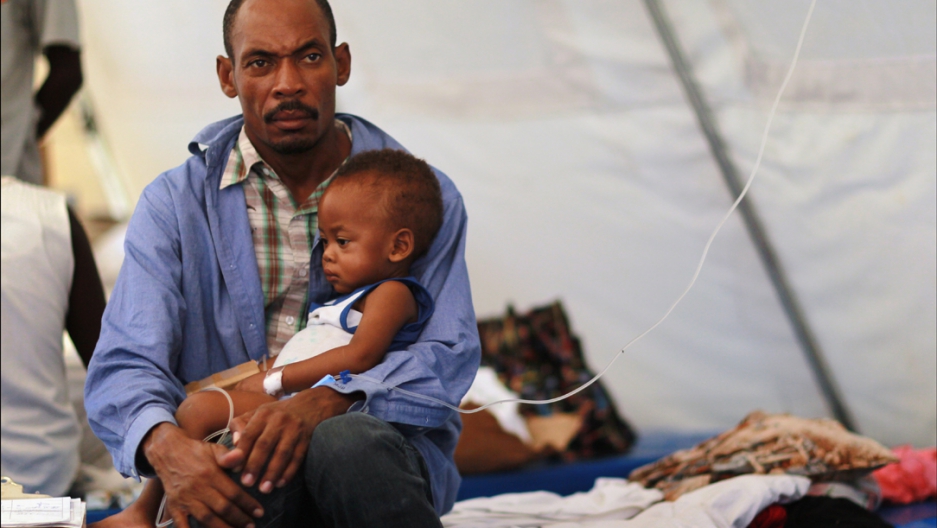 6,000 people have died because of a cholera epidemic in Haiti. Doctors say it is caused by poor sanitary conditions that make the bacteria easy to transmit through contaminated water or food.
Credit: Joe Raedle
Share

On August 31, French epidemiologist Dr. Renaud Piarroux confirmed suggestions by Haitians that the United Nation Stabilization Mission in Haiti (MINUSTAH) inadvertently caused a cholera outbreak that is now responsible for the death of more than 6,000 Hatiians. The strain was imported by UN Peacekeeping troops who had come from Nepal, where an outbreak had recently occurred. Harvard University microbiologist John Mekalanos told Science magazine that the genomes of the cholera strain are practically identical. The study has raised questions about the UN's mission in Haiti, whether the peacekeeping troops are more harm than good. The UN has not apologized for the incident.

GlobalPost spoke with Dr. Richard Garfield, an infectious disease specialist at Columbia University's Mailman School of Public Health about why it's important to track cholera, how it's tracked, and what the implications of the study are.

Can you speak a little about your work in Haiti, and elsewhere?

I have done a variety of projects in Haiti for Columbia University and Centers for Disease Control [and Prevention, CDC] in helping coordinate the central hospital after the earthquake and in reestablishing the nursing school at that site and in developing the training programs for the ministry of health. What I do in general is a little bit of this and a little bit of that. But I'm an infectious disease specialist.

How is cholera spread?

It's almost all spread by people or contact. Cholera wants to get itself out into water and spread around so that the next person has the opportunity to be exposed orally.

[Cholera] is a vibrio [a type of bacteria], which in some patients causes almost no symptoms, and in others is an irritant to the bowel — it prevents re-absorption of water, results in massive food loss — and that's what kills someone.

What is the importance of tracking and mapping these diseases?

When the first cases were found in Haiti, you wanted to know where they were because you wanted to limit the exposure of people there to other places, resulting in fewer cases. The mapping we did informs people who were in the zone where cholera had been confirmed that they may have been exposed so that they could pay attention to any possible symptoms and get treated quickly.

What exactly is the genome study saying?

The genetic footprint of any biologically entity can be used to identify when it emerged and who and what it's related to. There are, I think, six strands of cholera in the world that can be differentiated this way (through very subtle changes in the genome). Like any other organism, there is a evolutionary pressure so there are small changes in the genome of the organism, and that lets us track them. This genome of the cholera in Haiti is a recent one that was identified in South Asia.

What does that mean exactly?

That means that the person who was the first case, the index case, in all likelihood came from that region of the world to Haiti and began spreading the vibrio there because we don't find that brand of cholera in other parts of the world.

What are the implications of the study?

It's not much we didn't know. Since we do know that wasn't cholera in Haiti, and we know that there is cholera now. We know it's an imported disease, and that's the key, because we thought it wouldn't be imported. But in a world with rapid mass population movements, it's always possible to import a infectious condition to an unexposed population.

Is there a point to the blame game?

I think there is. I think this tells international organizations a lot about what they ought to be doing to make sure that they protect that the people who are meant to be the beneficiaries from the diseases that their own people bring.

What do you mean? Ought to be doing?

Anybody with a severe diarrhea should be screened and should be prevented from coming into a zone where there is no cholera. Anybody who's coming as health worker, or development workers or peace keeper ought to have a full compliment of immunizations, so there's no chance that they can expose that population to measles, particularly.

Is that not being done?

It's spotty, because different countries send people. Some people come on their own, and some people come through national groups in missions. That depends on the quality of the preparation in their home country and that varies a great deal.

Are you against the disaster relief tourism, then?

No, I think that disaster relief tourism is a very good thing. We just have to be humble and careful.

Should the UN be claiming responsibility for this?

Um, I think probably what was done was the best thing that should be done. I don't think that taking a more aggressive role does anything particularly useful. My question is to go back to the camp where the Nepali troops were and what the sanitation of their latrines is like today. That's what would make a difference. Because there is so much fecal matter, cholera is easy to spread. You need good sanitation to avoid spreading it. There are many opportunities to interrupt the transmission of cholera. First of all, by only accepting people who are asymptomatic to go to the country. It is possible to vaccinate them, which is not perfect but helps to raise their immunity, so that they're less likely to have any cholera to spread. The most important thing is that those who come should be using good sanitation and those who are down river from them, need good access to clean water. If those things are in place, you don't get an epidemic.

There's an increased amount of flooding in Pakistan, is that a concern? Will what happened in Haiti become a sort of advisory on what not to do?

Pakistan is in a very different situation because they have endemic cholera, it's a normal and common disease that follows a seasonal pattern. It's a little bit here, a little bit there, everywhere. And in the rainy season, you always get more cases. So, if there are no cases, like in Haiti, you get even one case, that's an epidemic. In Pakistan, you expect thousands of cases every year, so if you're within the normal range, of some thousand cases, that's not an epidemic. It's equally a situation where improving sanitation and protecting yourself by making sure you have clean water, reduces your chance of getting sick. And, that is what's needed in villages, particularly those areas that are most affected.