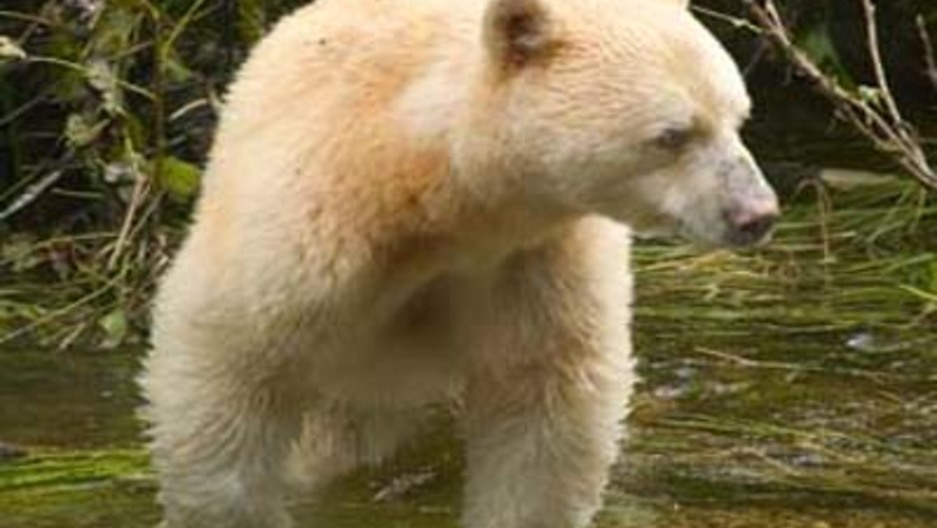 The white black bear, also known as the spirit bear, lives in the temperate rainforests of Canada. (Photo courtesy of Wikimedia Commons)

Hidden amidst the Great Bear Rainforest of western Canada lives one of Mother Nature's best kept secrets: the spirit bear.

Known also as the Kermode bear, this rare subspecies of American black bear is found only in British Columbia, where about 500 specimens live among the coastal islands. Having lived virtually undisturbed in the largest stretch pristine rainforest in the world, the spirit bear and its habitat are now threatened by the Northern Gateway tar sands pipeline project.

The proposed pipeline will stretch 700 miles across western Canada from Alberta to a port on the coast of British Columbia, where the refined oil would then be shipped to China and Japan, and perhaps California. The port would be built right in the heart of the Great Bear Rainforest.

Spirit bear advocates and residents of the area "aren't so much worried about the pipeline, but their major concern has to do more with the oil tankers that would be winding their way through these islands at a rate of about 250 per year," said Bruce Barcott, a journalist who wrote a story about the spirit bear and its plight for the August issue of National Geographic.

"Some of the tankers that would go through that area are about as long as the Empire State Building is tall," Barcott said. The tight passageways between the islands that make up the Great Bear Rainforest paired with the high density traffic make the area ripe for a disaster on the level of the Exxon Valdez oil spill.

"They don't see a whole lot of benefits coming their way," Barcott said. The First Nation also turned down an opportunity for a timber company to collect lumber from the Great Bear Rainforest in the 1990s.

As for the spirit bear, most of their food comes from the annual salmon spawn. If the oil trade interfered with the natural system of the spawn, the bears might not be able to amass enough fat to support cubs in the following year -- dwindling the spirit bear population even more.

According to Barcott, contrary to popular belief the spirit bear is not a common figure in First Nation mythology. Rather, the bear's existence has become a close-kept tribal secret for generations -- aiding both the First Nation and the bear's survival through colonists, fur trappers, logging companies and hopefully now the pipeline.

"I think the First Nation is now interested in publicizing the spirit bear's existence if only as a way to help protect the land and the water that both they and the spirit bear rely upon," Barcott said.

Read the full transcript and see more photos of the spirit bear on the Living on Earth website.