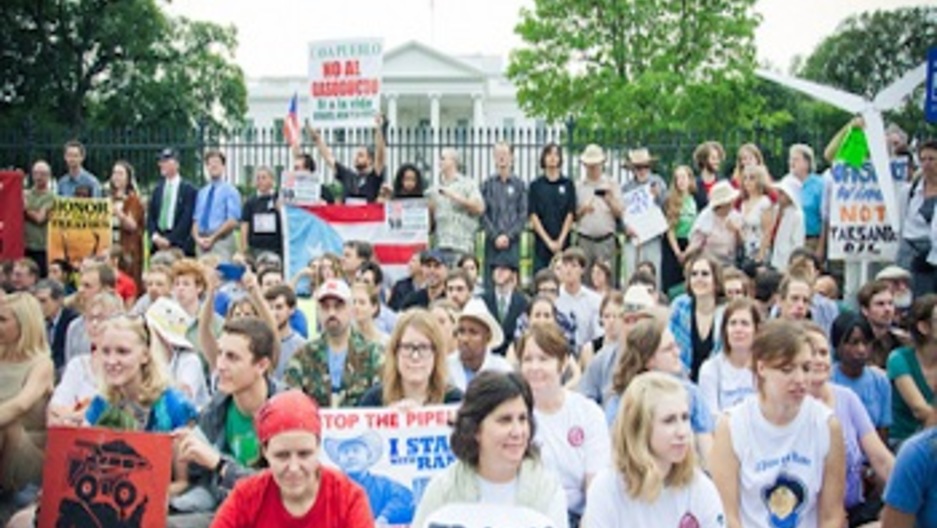 The protests against the Keystone Pipeline Expansion were the largest acts of civil disobedience since the Vietnam protests. (Photo: Josh Lopez, Tar Sands Action 2011)

Keystone XL is a proposed 1,700-mile pipeline that would carry thick, gooey oil from the tar sands of Alberta Canada to refineries along the Gulf Coast of Mexico. Along the way, the seven-billion-dollar pipeline would pass through two Canadian provinces, six U.S. states and over the nation’s largest aquifer. Some 1,200 people have been arrested in recent weeks in front of the White House trying to stop it.

The protest has "turned into the biggest display of civil disobedience in 30 years in this country," according to environmentalist, writer, activist and fellow protester Bill McKibben. "If we start burning this stuff in a big way, it’s essentially game over for the climate," he told Living on Earth. "So, that’s one reason that there has been this, you know, willingness of 1,250 people to march themselves off to jail."

Another reason why people are willing to protest, according to McKibben, is that "for once, we have a chance of prevailing." For the pipeline to go ahead, President Obama has to sign a Presidential Certificate of National Interest. And the protesters think they might be able to prevent him from doing that.

Many of the protesters are still fans of President Obama. "Many of us were arrested wearing our Obama ’08 buttons," McKibben says. And most will likely still vote for him in the next election. But McKibben emphasizes, "to get reelected, to have that kind of enthusiasm that marked his last campaign, he’s going to need to do the right thing here. As one of my young colleagues said, 'it’s hard to knock on doors when you’re in handcuffs."'

Still, McKibben is hopeful about what will happen. The odds "were slim to none two weeks ago," he says. "The odds are probably still against us, but they are improving daily and hourly. What had been a regional issue is a national and international one. Word is out: global warming, you know, it’s not like we’re facing some future threat."

Read the full transcript on the Living on Earth website.