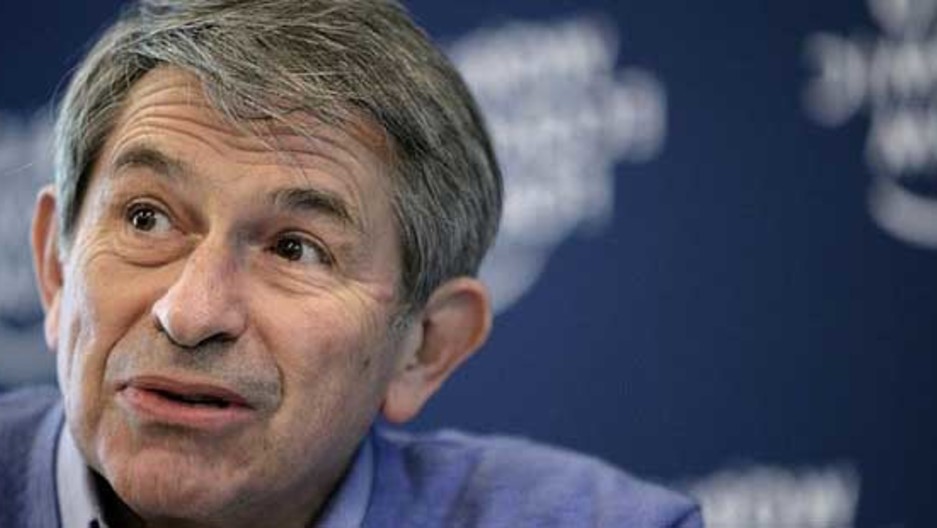 Share
By Arun Rath, PBS FRONTLINE Douglas Feith was Under Secretary of Defense for Policy for President George W. Bush until August 2005. He says he's "one of the very few people who was actually an official in the administration who will admit to having been a neoconservative." The reason someone like Feith "admits" to being a neocon instead of proclaiming it can be boiled down to one word: Iraq. It wasn't always that way. Immediately after 9/11, President Bush was looking for a new approach to fight what he saw as a new type of war. "What the president saw was the necessity to do everything reasonable to prevent the next attack," Feith said. "And I think that was really the radical departure from past practice regarding terrorism." Neoconservatism provided a framework for that radical departure. Preventing the next attack meant not just going after terrorists, but transforming those parts of the world that produce them — "draining the swamp," as then Secretary of Defense Donald Rumsfeld put it. In April 2002, Deputy Secretary of Defense Paul Wolfowitz, told PBS' FRONTLINE how, in this wider concept of the conflict, attacking the stateless al-Qaeda was only the first objective. "The second objective is state support for terrorism. And the third is this larger connection between states that support terrorism and states that develop weapons of mass destruction," he said. Overthrowing Saddam happened to mesh nicely with the neocon vision of using American power to spread American ideals of democracy and open society. It was a photo negative of the old "domino" theory of communism: in this era, liberal democracy would spread like a virus from country to country. Of course, it didn't turn out that way with Iraq: a chaotic, bloody occupation that lasted years instead of the promised months discredited the neocons. "The neoconservative doctrine by 2004-2005 looked to be in shambles," said Jacob Heilbrunn, author of "They Knew They Were Right: The Rise of the Neocons." The fall of the neocons happened quickly and dramatically. Iraq turned into a bloody quagmire; the Republicans lost big in the 2006 elections; ultimately Bush fired Rumsfeld, and Heilbrunn says the President turned away from Vice President Cheney and the other hawks and neocons who wanted to attack Syria and Iran. "Condoleezza Rice and Robert Gates became the dominant foreign policy thinkers, so you briefly had a resurrection of the older realist tradition in the Republican Party and in the presidency." He noted that tradition extended into the Obama administration, which kept Gates as defense secretary. But it's unlikely Heilbrunn's next book is going to be titled "The Rise of the Realists." While almost all of the old neocon crew are back in the same think tanks where they spent the Clinton years, they remain influential. And they're finding new support for their worldview in current events. "In the past year — you've suddenly seen the flowering of the 'Arab Spring,' and a vindication of pretty much everything the neocons had been saying about how Arabs want democracy too, they want human rights too," said Max Boot, who, at 41, might be considered a 'next generation' neocon. Boot is a member of the Council on Foreign Relations, the author of "The Savage Wars of Peace: Small Wars and the Rise of American Power," and an advisor to the military. "I think there was a taint associated with the idea of neoconservatism as a result of what happened in the case of Iraq, which I think was unfair and unwarranted, because in fact if neoconservatism means anything it is a devotion to our ideals, and promoting those ideals in all sorts of ways, most of which are not military," Boot said. When asked if the taint of the Iraq war has made it harder to argue for foreign intervention, Boot's response is swift and unequivocal. "Oddly enough, it has not really made it that much harder to argue for intervention, all you have to do is look at what happened in Libya." In the case of Libya, President Obama overruled the realist objections of Defense Secretary Gates: that an intervention was not in America's interests. The move prompted neocon pundit Bill Kristol to label Obama a "born again neocon." And Obama is hardly averse to acting unilaterally, launching more drone strikes in Pakistani territory in his first year than the Bush did in his entire term. Given the current crop of Republican presidential candidates, who have all talked about the need to withdraw troops from Afghanistan and avoid nation-building – one could get the idea that Obama may be the neocon's best hope. Not so fast, says Heilbrunn. "Apart from Ron Paul, I don't see a republican candidate who has really repudiated neoconservative doctrine." Ron Paul is in fact the only candidate who's talked about a complete withdrawal. The others say they would ultimately defer to the wisdom of the generals on the ground – none of whom has ever asked for fewer troops. In Monday night's Tea Party debate, Rick Perry said we should bring our troops home, but we also needed to maintain a presence in the country. The Texas Governor is currently at the top of the pack and he's been getting foreign policy tutorials from none other than Douglas Feith and Donald Rumsfeld.