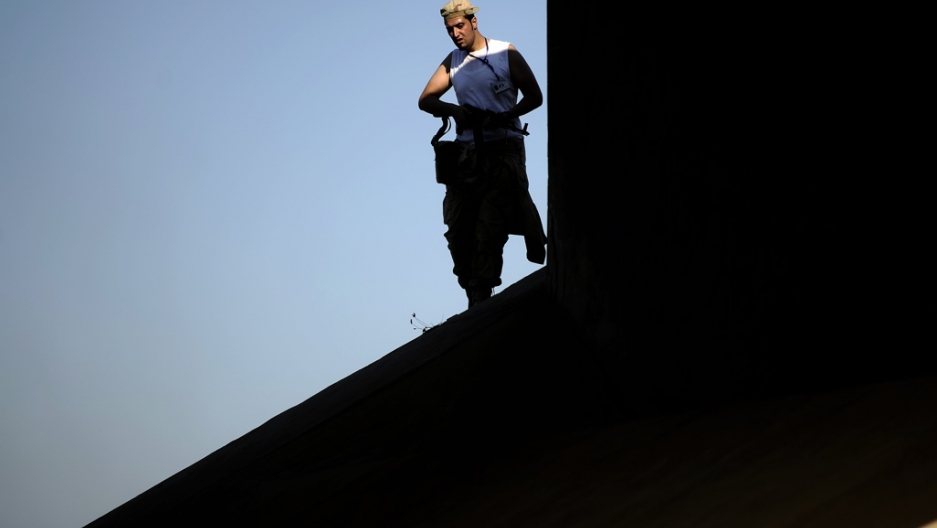 A Libyan rebel looks down from a bridge near the center of Tripoli on Aug. 21, 2011.
Credit: Filippo Monteforte
Share

While the war crimes committed by Muammar Gaddafi and his forces are comparatively well known, Amnesty International said in a report that the rebels had also committed widespread abuses since the revolution began in February, including the execution of dozens of pro-Gaddafi prisoners. Hundreds of black migrant workers, assumed to be mercenaries, have also been detained and are being held illegally, the rights group said.

“The new authorities must make a complete break with the abuses of the past four decades and set new standards by putting human rights at the center of their agenda,” said Claudio Cordone, a senior director at Amnesty International.

More than half the prisoners detained in Tripoli and Zawiya are believed to be foreign nationals. Most are believed to be migrant workers and not fighters. Migrant families have also been the target of harassment and discrimination, forcing many to leave their homes.

The problem is apparent In Tripoli’s Al Jadaida prison, where both Libyan and foreign nationals pleaded their innocence through the bars of overcrowded, sweltering cells on one recent day. More than half of the 760 detainees at Al Jadaida are black migrants.

“I have lived here with my Libyan wife for 23 years,” said Faisal Mohammed from a dark dreary cell that held 29 Sudanese men. “The new government arrested me as I walked in the street with my wife two weeks ago. I have not been allowed any contact with my family since.”

Although conditions under which the Libyan war prisoners were kept appeared similar to those of the foreign nationals, the Libyan prisoners who spoke to GlobalPost had all been allowed contact with their families. The foreigners, meanwhile, had not been permitted any contact with their family, lawyers or their Libyan employers, whose testimony could clear their names.

James Foley with the Libyan rebels:

“The treatment is the same, the environment is the same, but I don’t think the judgment will be the same,” said Victor Baboa, a prisoner from Liberia, who said he has worked in Libya for 5 years as an engineer. “We have no lawyers, no case, no communication. How can we defend ourselves?”

Other prisoners said they believed racism influenced their treatment.

FROM LIBYA: For love of guns, the worrisome proliferation of small arms

“If you are Libyan, you can get anything when you want it — food, water, cigarettes,” said one detainee as he rolled a half-filled water bottle to thirsty prisoners in the opposite cell. “But for us, they give us the minimum.”

Samira Bouslama, an Amnesty International researcher based in Tripoli, said although racism against black migrants has long been evident in Libya, Gaddafi’s claim that “all African’s will defend me,” as well as exaggerated reports that large numbers of sub-Saharan mercenaries had joined his forces, has fueled hatred and xenophobia.

“We expect these arbitrary arrests of black Africans will continue for some time because there is no system in place and everyone has a gun,” Bouslama said, adding that at this time there is only one official detention center in the capital and that Amnesty International does not have a clear idea of how many unofficial centers are under operation.

For the men in detention, Bouslama said, there appears to be no discrimination between the prisoners, but many, both Libyan and foreign, had been beaten and in some cases tortured during their initial arrest.

In the early stages of the revolution, GlobalPost received reports of mistreatment of mercenaries. Many rebel fighters openly admitted that mercenary prisoners were not shown the same mercy as native Libyan captives. One video viewed by GlobalPost, dating from March, showed about 10 black prisoners in a cramped concrete cell with clear signs they had been beaten under interrogation.

In Tripoli’s Central Hospital, several Gaddafi fighters, including both Libyan and foreign nationals, were being treated last week.

Mohammed, a soldier from the notorious Brigade 32, was still being treated after his leg was shattered in battle one month before. He did not want to give his full name, but he claimed to be of black Libyan decent. Hospital staff disputed this claim, saying that his accent and appearance were clearly foreign.

Mohammed was thin and his eyes seemed filled with fear. But he spoke well of the hospital staff.

“Thanks to God I am still alive,” he said. “I am not afraid. They treat me very well.”

A clear hostility was shown toward the foreign African patients by members of the hospital's security staff, but medical workers appeared to treat all the patients equally.

In a recent visit to a school building in Misrata that has now been transformed into a prison, a group of young Libyan war prisoners sat and joked with their warden. Although facilities have become overcrowded in the past two weeks, prisoners said they received good food, recreation facilities, medical care, visiting rights and regular contact with family members.

Many at this prison are still teenagers. Others served in Gaddafi’s army for many years. Some said they had fought out of loyalty for a leader they once believed in. Others said they fought out of fear, knowing retreat was punished with death.

“One man in our unit wanted to go back home,” said Abdul Basset Amara, 26. “Our commander made him dress in women’s clothing and told him he was free to go. Humiliated, he returned to the front.”

The inmates spoke of the propaganda they were told that had convinced them to fight. They spoke of stories of Al Qaeda, foreign invasions, and fictitious victories in other parts of the country. With no outside contact, the men said they believed what they were told.

Abdul Gassem, 26, said he volunteered to “liberate the people of Misrata from the foreign invaders.” But when he found himself fighting face to face against fellow Libyans he realized this was no foreign invasion and surrendered.

“At first they [the rebel unit] didn’t treat me so well, but then we started talking and we became friends,” Gassem said. “They still come here to visit me and make sure I’m OK.”

Horror stories of the killing of rebel prisoners were also numerous.

“Our commanders told us the rebels cut the throats of anyone who surrendered, and cut them into pieces and ate their hearts,” Amara said. “We were afraid to be captured, but in here they treat us like brothers.”

Mohammed Abubaker, 16, said he was chosen along with 45 other students when Gaddafi soldiers visited their high school. Their families were told they were needed to man check points within the city but instead they were shipped directly to the front line near Misrata.

While fighting in Dafnia, Abubaker was shot several times. He hid in the sand as rebel forces advanced.

“They called out if anyone was alive to surrender and we would be OK,” he said. “I came out from my hiding place and handed over my weapon. They took me directly to the hospital. Many people looked after me because of my age — like a son.”

Abubaker said that when he was transferred to the prison he was able to call his mother for the first time since he was taken from the school. His family had been told he died and had already held a funeral for him.

“When I called my family, everyone was crying,” he said.

The National Transition Council's Justice Coordinator Jamal Bennor said it was too early to estimate how many prisoners of war were being held throughout Libya as the numbers had risen rapidly over the past few weeks and are continuing to rise.

Bennor said a justice committee had been established to deal with the prisoners and investigations were already underway. Those found guilty will be separated into three categories — criminal prisoners, military prisoners and members of Gaddafi's secret police, known as the 5th columnists.

This last category will remain in custody not only for their crimes but also for the own protection, he said, adding that the risk of revenge killings against men like this is extremely high.

He said the next critical step is to form a new high judicial council made up of trusted and non-corrupt members of the community.

"It will take time," Bennor said. "There are many prisoners and many obstacles. But I think the investigation process will move quickly."

As for rebel fighters accused of committing crimes, Bennor said the matter is highly complex and timing is crucial.

FROM LIBYA: What goes up must come down, friendly fire a menace

“To be completely transparent, we know there are many crimes committed by the rebels, but it is difficult to try rebel fighters at this time," he said. "It is illogical in some situations — the people will not accept this. They committed crimes but they are still standing with us at the same rank."

Bennor said the solution is all about timing. To place men hailed as heroes before a court would not be accepted. It would incite instability and internal conflict, moving the country in the wrong direction.

"At the same time we are committed to enforcing the law and those accused should face a court in time," he said.

With rebel forces set to advance on Sirte and Bani Walid on Tuesday, hopes are high that the leaders and those most responsible for the crimes committed in Libya, including Gaddafi himself, would be caught shortly and would face trial in Libya.