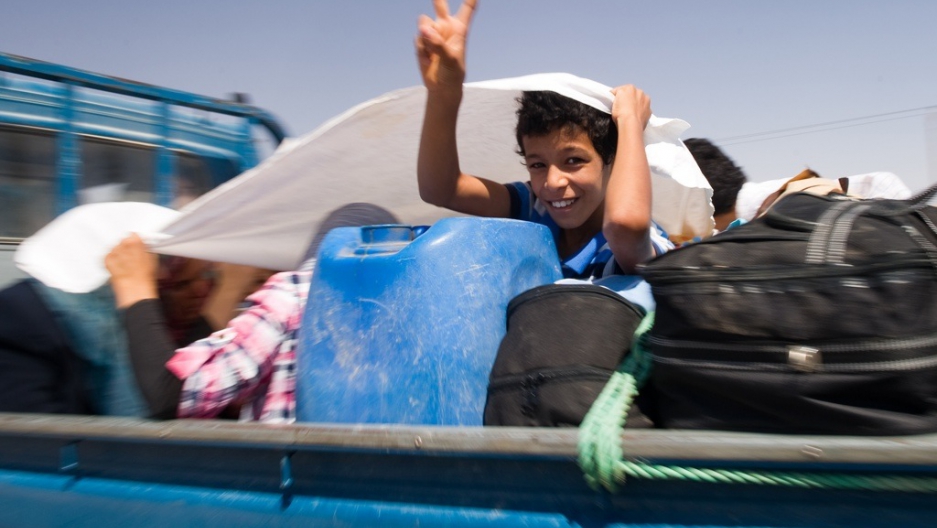 A Libyan boy fleeing with his family flashes the V-sign for victory on the road out of Bani Walid on September 12, 2011. Civilians poured out of the Libyan oasis town fearful of new fighting between Muammar Gaddafi's forces and the rebel troops that have besieged the Bani Walid valley
Credit: Leon Neal
Share

NEAR BANI WALID, Libya — A steady stream of families fled Bani Walid in anticipation of a full blown assault on the town, after a day of heavy fighting in which 10 rebels were killed as they tried to clear houses in the outer villages that comprise the rugged pro-Gaddafi stronghold.

Families packed in cars said they were expecting a fightout between the rebels and Gaddafi forces today.

One unidentified woman from Bani Walid, said it was not clear where the gunfire was coming from but she was afraid of rebel bullets. She said many families are trapped there either because they don’t have the fuel for their vehicles or they are still caught in the center of Bani Walid while pro-Gaddafi forces fire from the southern slope at the rebels encroaching from the north.

The rebels claimed they ensured the families’ safe passage.

“We sent a message to the families to assure them we are there to protect them,” said Abdullah Ganshiel, lead negotiator between the rebels’ National Transitional Council and the Bani Walid tribes. He said the messages were sent via Tarhouna radio in an attempt to counter the Gaddafi propaganda being broadcast inside Bani Walid.

Ganshiel said only a small number of families actually fled today compared to the estimated 100,000 people living in the 52 villages that make up Bani Walid.

“People only left from the north and town center where most of the fighting has been,” he said.

FROM LIBYA: For love of guns, the worrisome proliferation of small arms

But the much anticipated assault on Bani Walid didn’t come today, as fighting on the frontlines died down to “scouting missions,” said Ganshiel.

The reason the rebels didn’t attack is they don’t have permission from the military council in Benghazi to enter Bani Walid full force from the north, said one rebel spokesman, Abdullah Al Warfali. He said that they were waiting instead for a better-organized, armored group based in Misurata to arrive within the next 48 hours from the east.

NATO planes were heard flying over the Bani Walid area today. Some speculate that rebels were given a directive to clear out of the Bani Walid valley so that planes could bomb loyalist positions there. It would fit with a pattern of NATO bombs being the enabler for rebels to take key towns across Libya.

Scores of rebel convoys were seen leaving from the direction of Bani Walid. One volunteer said he was returning to Tripoli. Abu Saif, a media coordinator said they were going to rest and set up communications.

Clearly there is a lull in fighting from this front, but for how long is unclear.

Security is still tentative outside Bani Walid. Dr. Mabrouk Kernaff, a medical volunteer with family roots in the area, said loyalist snipers shot an ambulance at the border of Tarhouna, 50 miles (80 kilometers) north of Bani Walid, yesterday evening. Two doctors inside the ambulance were wounded, he said.

Four captured loyalist soldiers were spotted being shuttled into a building across from the triage hospital yesterday evening. This morning Rida Ahmed, a volunteer surgeon, said he saw evidence that one of the captives had been beaten with a stick.

“After what I saw today, I’m afraid we’re replacing one Gaddafi with another,” Ahmed said.

Reporters were denied access to see the prisoners today. The lead doctor assured reporters that the prisoners were being well cared for.