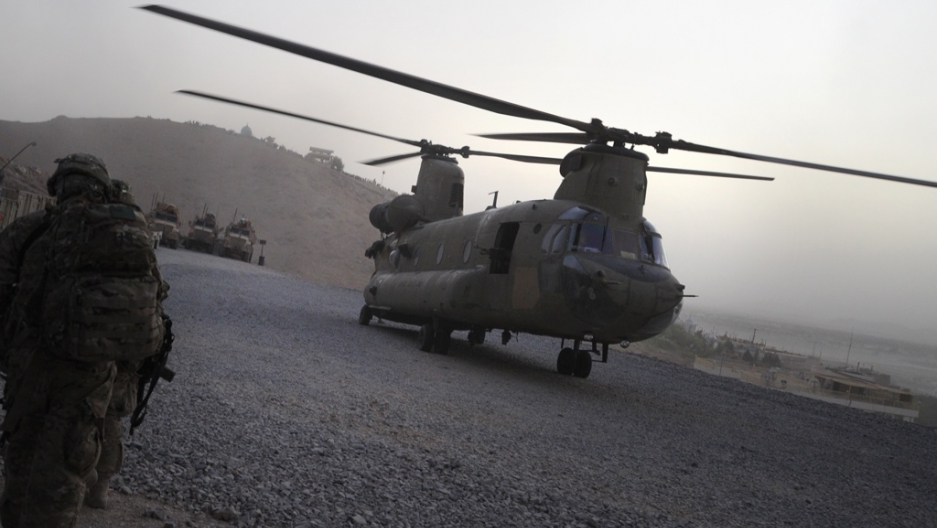 KABUL, Afghanistan — Sirens can be heard even in the remote corner of Kabul where I am sheltering with a dozen or so others, everyone trapped here by the attacks that have been going on in the center of the city for hours.

Armed men man the gates of this guest house in western Kabul. More sit on the roof. All the phone networks are busy, so it is nearly impossible to communicate with friends in the hot zone.

Nerves are stretched, and no one knows what will happen next.

What is known as a "complex” attack — one that involves a series of assaults and various weaponry — is ongoing near the U.S. Embassy. Explosions have been heard in several areas of Kabul, and there were reports that a schoolbus with children aboard was hit, though it later turned out to have been empty.

More from GlobalPost: 10 years on, Afghanistan is not far from where it started

A rocket directed at the U.S. Embassy fell on a house in a residential area nearby, killing the cook. At least four Afghan police have been reported killed, along with two civilians. More than 20 were reported injured, but as information trickles in the figures are expected to rise.

Reports from the U.S. Embassy spokesperson say that there are no U.S. casualties “at present,” and a USAID officer sent out a message on Facebook saying, “we’re fine.”

The attack seems to have also involved the headquarters of NATO's International Security Assistance Force (ISAF), which is a stone’s throw from the embassy; there are no reported casualties there but there has apparently been some damage.

Reports are that a helicopter is circling Abdul Haq Square, where attackers have taken up battle stations in a construction site. The half-completed building is several stories tall, so the insurgents have had a comfortable vantage point from which to fire rockets, rocket-propelled grenades and other weaponry.

One journalist reported seeing muzzle flashes from the 10th story.

An official from the Interior Ministry has reportedly said that fewer than 10 insurgents were involved in the attacks, which have paralyzed and terrorized the capital for more than six hours. At the time of writing, all but two have been reported killed, but the sound of helicopters, sirens and explosions has not abated.

It is a nightmare made even more surreal by the statements coming out of Brussels.

NATO chief Anders Fogh Rasmussen's response, addressed to reporters in Brussels, jarred with the scene. "We are following the events closely," he said. "We have confidence in the Afghan authorities' ability to deal with this situation."

He added: "We are witnessing that the Taliban try to test transition but they can't stop it. Transition is on track and it will continue."

“Transition” is the term used for the transfer of security responsibility from NATO to Afghan National Security Forces (ANSF), which began in July. So far, seven areas, including Kabul, have been handed over.

Rasmussen’s assessment might be sounding a bit rosy to Kabul residents hunkered down during Tuesday’s chaos.

From Facebook posts to tweets to text messages sent out over a badly clogged network, Afghans and internationals are expressing their incredulity that once again the insurgents had been able to strike so close to the country’s nerve center.

Others were equally caustic in their comments.

“I hope someone mentions the ‘Ring of Steel’ in their reports,” tweeted one Afghanistan observer. He was referring to the police checkpoints throughout the city, which stop and hassle foreign women and law-abiding Afghan men, but all too often let the bad guys through.

“What good are those balloons doing?” asked one young Afghan reporter, referring to the two dirigible-shaped “spy balloons” that hang over Kabul, supposedly transmitting a constant stream of information to the ANSF.

Initial reports from security networks in the early afternoon indicated that National Security Directorate (NDS) troops had, indeed, stopped an “AOG (Armed Opposition group) cell” before it reached its target.

If so, they did not stop them for long. By mid-afternoon the city was in an uproar, traffic was all but stopped on most major roads.

It has been a shock — though not a surprise — to terrified but jaded Kabul residents.

“It had been quiet for too long,” said one international aid worker, who has been in the city for seven years. “I thought something like this might happen.”

Kabul has indeed been calm for a few months. The last major attack was in late June, when the Intercontinental Hotel in western Kabul came under fire, killing seven.

More from GlobalPost: Is the US ready to pursue peace in Afghanistan?

There have been numerous incidents in other parts of the country; a major explosion in Wardak, a province nestled right up against Kabul, injured 79 U.S. servicemen just three days ago.

Like the international assistance worker, many have been braced for an attack. The city was locked down tight for the 10th anniversary of the 9/11 attacks. Security restrictions were lifted late last night.

But other Kabul dwellers have been more sanguine in their observations. Just two days ago, newly-installed U.S. Ambassador to Kabul Ryan Crocker told the Washington Post that “The biggest problem in Kabul is traffic.”

It is a statement he may now be regretting. The ambassador’s residence is one of the highest points in the embassy compound, and hence most vulnerable to rocket attack.