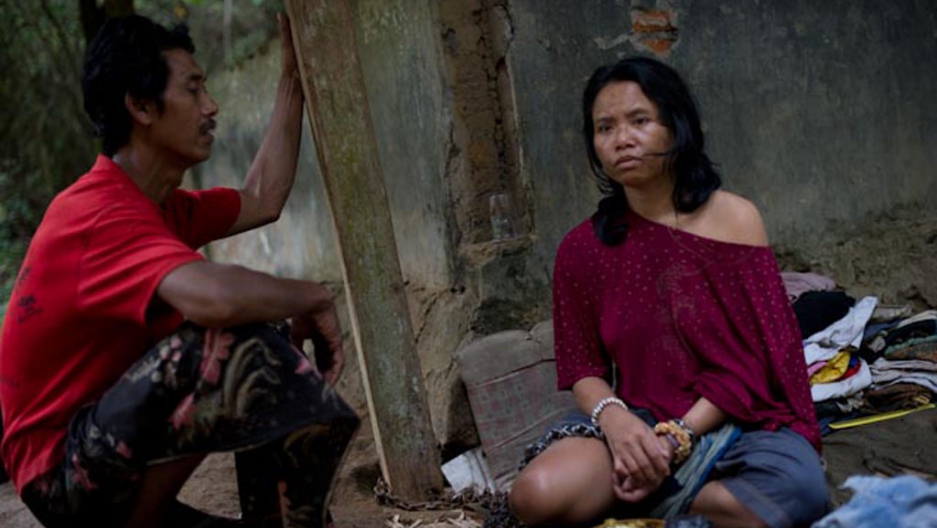 Nengah, 35, suffers from schizophrenia. Until recently, her family on Bali in Indonesia kept her chained to a concrete pit for nearly a decade.
Credit: Cokorda Bagus Jaya Lesmana
Share

ABANG, Indonesia — The harsh, tropical sunlight that dapples Bali’s tourist-thronged beaches streams through the fingers of a palm leaf and lands on the shoulders of Nengah, who slumps like a rag doll amid a pile of tattered pillows in the island’s far eastern reaches.

The poor village is remote, and Nengah spends her days in a heap, staring at hands that lie in her lap like dry leaves.

Today, Nengah is not alone. Neighbors have gathered in the mid-July heat to watch as her brother uses a stone to break a chain that has bound her to a concrete pit — her home — for nearly a decade.

Nengah, whose full name is confidential, suffers from schizophrenia. After the 35-year-old violently attacked her stepmother in a blind rage nine years ago, her family decided they had to restrain her.

Her situation improved after local psychiatrist Luh Ketut Suryani arrived in the village in June to find Nengah naked, caged and filthy. The doctor consulted the family and prescribed medication. Later, Suryani helped get Nengah's family to free her from bondage.

Nengah’s situation is not unique in Indonesia, where the mentally ill are often locked in chicken coops or chained up in family yards to prevent them from disturbing the community.

A shortage of psychiatrists, limited mental health services, stigma and misinformation about mental illness are some of the reasons people here go without treatment. In a country of 240 million people, there are less than 600 psychiatrists, many of them based in urban centers.

Dr. Irmansyah, the director of mental health at Indonesia’s Health Ministry, estimates that around 30,000 people are living in restraints, but gathering accurate information about them is difficult.

Officials say they are relying on community members to report cases like Nengah’s. Then it will be up to local health officials to negotiate with the families for their release.

Since taking his position in April 2010, Irmansyah, who goes by one name, has worked hard to reach out to rural communities and create awareness about mental illness.

But he says mental health remains low on the government’s priority list, particularly as it works toward meeting its Millennium Development Goals, or MDGs, by 2015.

The United Nations-designated targets for development fall under eight categories, including reducing child mortality, fighting disease epidemics such as malaria and AIDS and improving maternal health.

The MDGs have become the universal gauge for development, and countries are judged by their ability to meet them. “But improving mental health services is not part of those goals,” said Irmansyah, “so there is little incentive to spend on them.”

The former Harvard University fellow knits his fingers over his government-issued khaki uniform and sighs through his stiff grey moustache when explaining the uphill battle to improve mental health care here.

“Awareness is rising that restraints are against human rights,” said Irmansyah, but he worries that increasing depression among the elderly, behavioral disorders among teenagers and side effects of drug use will only increase the need for better care. “We need to be ready for these problems,” he said.

For now, community outreach is limited, confined to a smattering of volunteers and concerned psychiatrists like Luh Ketut Suryani.

In 2005, she founded the Suryani Institute in Bali, which uses a combination of psychiatry, anti-psychotic medication and spiritualism to treat mental illness.

Many Indonesians still regard mental illness as a curse caused by black magic and best treated by a spiritualist rather than a medical doctor. Suryani believes doctors should draw on local beliefs and religious figures to instill trust, a key to helping mentally ill patients recover.

In 2009 the governor of Bali committed $115 million to a program led by her institute to identify and treat people with mental illness in Karangasem, one of Bali’s poorest districts.

Suryani estimates that as many as 2,000 people in the district suffer from chronic mental illness.

With the government’s support she was able to reach out to more than 320 patients, but a year later her funding was cut. She now works to raise her own funds, but it's slow going.

Indonesia’s Health Minister, Dr. Endang Rahayu Sedyaningsih, says she understands the need for more resources, but her ministry has a limited amount of money to put toward tackling Indonesia’s raft of health issues.

Still, while only 2.3 percent of the total national budget goes toward health care, less than 1 percent of that amount is put toward mental health.

More people came forward to request help for mental illness when Suryani first began seeing patients under the government-funded program. And despite budget cuts, she still sees as many patients as she can. She currently sees around 450 patients, but her limited time and resources make repeat visits difficult.

During a recent visit she checked on Made, a schizophrenic she has been treating since 2009.

Made’s older brother and caretaker fielded the doctor’s questions: How many hours a night does Made sleep, and where? What does he eat?

Made stood in the yard nearby, tugging at his shirt and looking down in what seemed a bashful pose.

Suryani, whose long silver hair gives her a warm, grandmotherly look, asked him how he was responding to the medication. He held out his arms to show they were steady — a side effect of anti-psychotic drugs is often tremors.

It took Suryani making visits to Nengah's family every week for a month before they agreed to negotiate her release. But in the future they will handle the majority of her treatment.

Komang Gede, one of Suryani’s assistants, worries they may not be ready. “The family has suffered a trauma,” he said.

Relapses are common in remote areas where people are unable to return to mental hospitals for regular treatment. “When families spend lots of money on assistance and people continue to relapse they give up and turn to restraints,” said Irmansyah.

The lack of follow-up only entrenches the problem.

FROM INDONESIA: : The next Silicon Valley?

“If we stop treatment and people have not recovered then we must start again from the beginning, and that is not as effective,” said Suryani, who tells patients that recovering from mental illness is a lifelong process.

Increasing access to services is essential, but so too is improving the quality of Indonesia’s mental health hospitals, says Irmansyah, who tells stories of overcrowding and abusive staff.

Until the country gets serious about treating mental illness humanely, Irmansyah says freedom like Nengah’s will only be symbolic.