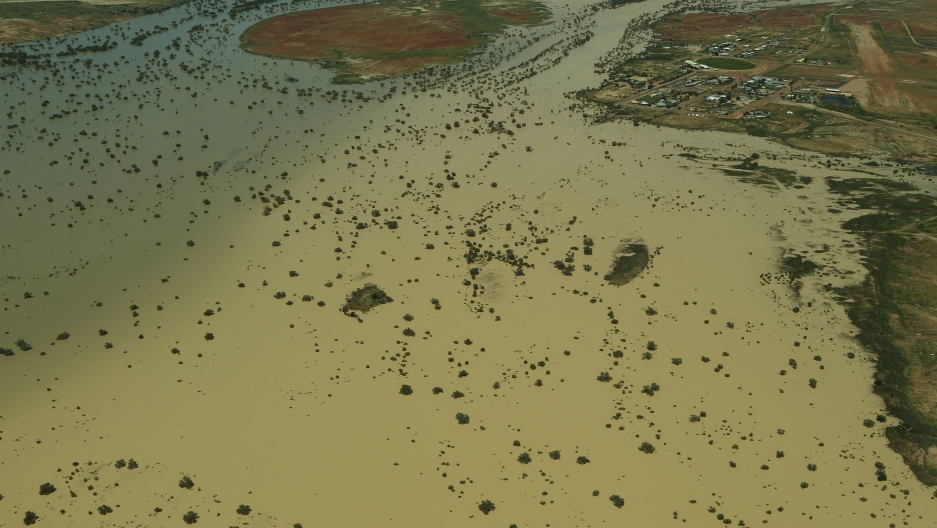 The flooded Diamantina River around Birdsville, Australia, is seen from the air with the on March 28, 2011. Queensland suffered a series of extreme floods from December 2010 to January 2011, affecting more than 200,000 people across more than 70 towns.
Credit: Mark Kolbe
Share

I love a sunburnt country,

A land of sweeping plains,

Of droughts and flooding rains.

I just typed that word-for-word from memory, I swear. The only thing I had to look up was the wordsmith behind one of Australia's most iconic poems, and almost kicked myself when I saw that it was Dorothea Mackellar.

That said I'm sure Mackellar would forgive me, having remembered her verse and — more importantly — its sentiment, imbibed by every Australian child with its mother's milk — or at least as a condition of progressing from elementary school.

The land Down Under is known for its extremes of weather — mostly hot and dry, granted, but lately a little on the monsoonal side.

Last summer in Australia saw the most devastating floods in the country's recorded history — with floodwaters inundating an area of land the size of France and Germany combined in the country's northeast. A number of major cities in the state of Queensland — which bore the brunt of the wild weather, mainly weeks of torrential rain — were cut off entirely, thousands of homes destroyed and industry brought to a standstill.

And after a cooler than average winter (by Australian standards), Aussies are now being told to brace themselves for another wild, wet summer.

The weather system resulting from a cooling of the normal sea surface temperatures around the equatorial Pacific Ocean, responsible for last summer's heartache, is back this year and expected to strengthen in the next few months. Not to be confused with El Nino, which draws the summer tropical weather away from Australia and brings drought.

Experts at the National Oceanic and Atmospheric Administration (NOAA) Climate Prediction Center upgraded last month's La Nina Watch to a La Nina Advisory, according to a statement on its website dated Sept. 8.

The recurring system is likely to bring more drought, heavy rains and severe weather to parts of the world, according to the Australian.

The June 2010 to May 2011 La Nina "contributed to record winter snowfall, spring flooding and drought across the United States, as well as other extreme weather events throughout the world, such as heavy rain in Australia and an extremely dry equatorial eastern Africa."

The northwestern U.S., meantime, can brace for a colder winter than usual, Mike Halpert, deputy director of the Climate Prediction Center, told the Australian, adding that the southern U.S. states should see a warming trend.

On the weather trends Down Under, Australia's ABC quotes Philip Duncan, weather analyst at weatherwatch.co.nz, as saying:

"It does feel like we are going that way again, but there are no signs yet that it will be a repeat of the last La Nina episode. And you have to remember that one that we had earlier this year was if not the strongest on record ... certainly a very close second place, and that's an all time record.

"So last the last La Nina period, very, very strong and we were lucky that we didn't get more damage out of it, especially when you think that some of those floods, for example... I think this summer fingers crossed it won't be quite as extreme."

The Australian Bureau of Meteorology gives this clinical — and alarming — assessment:

"Its worth noting that since 1900, about half of all La Nina events re-emerged in the second year. Further cooling of the central Pacific Ocean coupled with persistent positive SOI values in the next few months would further increase the chance of a La Nina event at the end of 2011."

Professor Stewart Franks is a Hydro-Climatologist from the University of Newcastle, meantime, told the ABC that unequivocally, La Nina was responsible for "the terrible wet weather last spring and summer," and that Australians had better get ready more of the same.

"We are looking at a wetter than average summer season with potentially very high flood risk," Franks said.

He warns that La Nina — like "Right in the middle of the summer season is when they have their maximum effect," he said. "There's nothing you can do to stop these weather patterns, all you can do is prepare for them."

And ready Australians are getting.

Skillstech Australia, a trades institute established by the Queensland Government, this year offered free training to young Queenslanders in how to rebuilt public infrastructure after Nina-like weather events (floods and cyclones, for example).

Word is the volunteer SES (State Emergency Services) is also hungrier than usual for new recruits.

The flip side the extreme weather here is that many areas of outback Queensland are now thriving environmentally, with new wildlife and flora appearing that is being described by enthusiasts as once-in-a-generation.

And with tourism vital to the state's economy, the Queensland and Australian government have committed around $10 million in emergency tourism funding to promote travel to the state, selling Queensland as "open for business."

I wonder, had she lived this long, would Mackellar (who wrote her classic in 1904) have been shocked at the meteorological marvels now afflicting her homeland.

Or perhaps it might have only added to the allure?

I love her far horizons,

Her beauty and her terror –

The wide brown land for me!