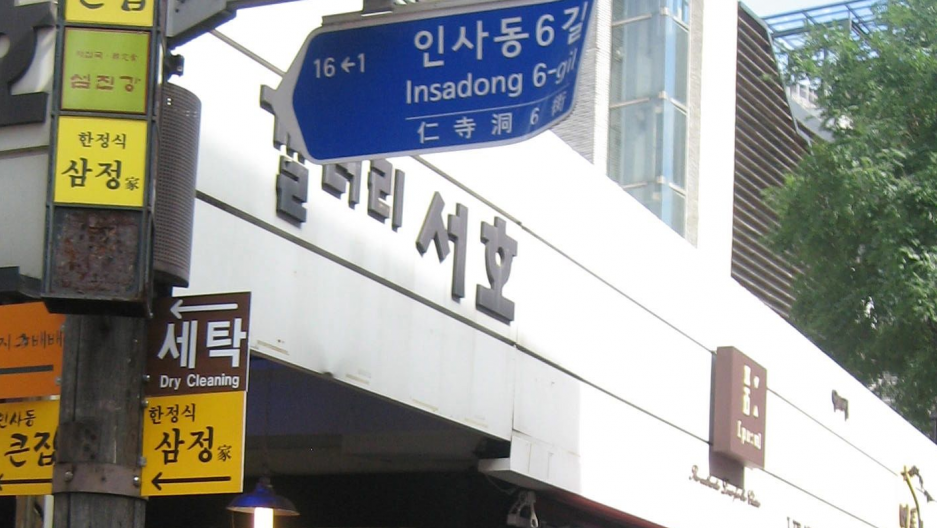 Share
By Jason Strother Around lunchtime, calls start coming in to the Yeong-Hwa-Ru Chinese restaurant. Mr. Han takes orders over the phone for his takeout-and-delivery place. His deliverymen check out street maps pinned up all over the wall before heading off on their motorbikes. Finding the customers can be pretty tricky, especially for new drivers, according to Han. "We start off by sending them to nearby places, really simple directions. Once they get familiar the area, then I'll send them farther away." The problem is South Korea's century-old street address system. It can be so confusing that even longtime residents often carry maps and GPS devices to find their way around. Korea's address system is modeled on Japan's, which assigns addresses chronologically instead of geographically; buildings are numbered according to when they were built, not where they're located on a street. Directions here usually include a list of landmarks, and maps are often printed on the back of business cards. But this complex system will soon be a thing of the past. South Korea's is instituting a new address system that the government says will make it easier and quicker to order takeout, send packages and get help in case of an emergency. The new system is more like those in the West, using a building's number, street name and city, rather than a neighborhood and lot number. Small blue placards featuring new addresses have begun appearing on every building around the country. The government will allow use of both old and new systems until December 2013. After that, the old addresses will be abandoned. Not everyone here is so pleased with the change. Some of the strongest opposition comes from Buddhists. Monks at Seoul's Jogye Temple petitioned the government to hold off on the new system. "In our country there are areas and roads that are closely related to Buddhism," said a monk named To-gyoung. He said the new system drops some neighborhood names that are important to Buddhist tradition. "We feel like we're losing our heritage." "The monks don't oppose the new system in general," said To-gyoung. "They just want the streets and neighborhoods with Buddhist names to be left alone." Officials at South Korea's Ministry of Public Administration and Security, the agency in charge of the new addresses, declined to be interviewed. But a spokeswoman said that the ministry is still working out the kinks. Beyond the monks, many other Koreans aren't so sure if Western-style building numbers will make their lives any better. Taxi driver Hong Jae-do punches an address into his dashboard-mounted GPS navigator. He's still waiting for maps with the new addresses to come out. "I haven't started using the new system yet, so I can't be sure if it really will make a difference. But even when the maps do come out, I'll still use my GPS to find where my customers need to go." 70-year-old Yeon-il, who owns a teahouse in a small alley in one of Seoul's busy tourist neighborhoods, said she's glad to see the old system go. "The old address system did make it hard for people to find my shop – they sometimes walked right by it." But Yeon-il went on to say that there are many small alleys in her neighborhood and all around the country. "If people couldn't find what they were looking for under the old system, they probably won't be able to find it now, no matter what numbers appear by the front door."