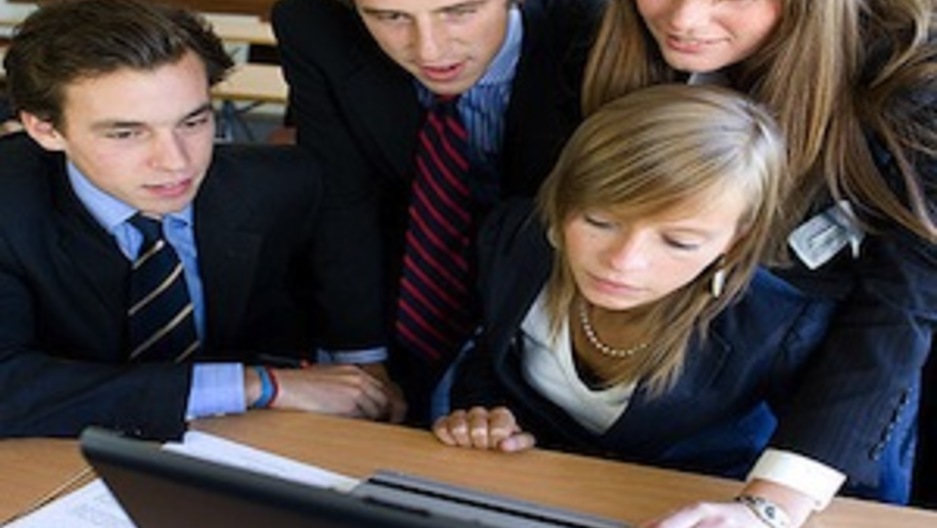 Image of people on a computer (Image by Wikimedia user Glion Institute of Higher Education (cc:by))

Human beings crave information. Picking up new information can trigger the release of chemicals in our brains like dopamine, which is associated with pleasure. "You can understand that as being a very primitive instinct," writer Nicholas Carr told To The Best of Our Knowledge. "Being aware of everything going on around you probably helped you stay alive."

For many people today, Carr says, "we've replaced our natural environment with a digital environment that is incredibly rich with information and data. Unfortunately our brains aren't that all that good at processing the amount and the speed of data and information coming at us all the time now."

As people subject themselves to constant bursts of information, "we literally kind of overload our short-term working memory," Carr says. "As a result I think we become more superficial thinkers, even as we have access to more and more information opened up to us."

The act of thinking once had two steps, according to Carr: "you gather that information and then you think about it deeply and personally. With the internet and with digital media in general, I think that all the emphasis is shifting to that first step."

The human brain is remarkably adaptable, and Carr believes that people are adapting their thinking to the pace of the internet. The effect is that for many people, Carr included, spending too much time on the internet actually makes it more difficult to take more time for tasks like reading books. "After a couple of pages or even a couple of paragraphs, my mind got antsy," he says. "It wanted to behave the way I've trained it to behave when I'm looking at a computer screen. It didn't want to focus on one linear argument."

After writing about the issue, Carr has begun to shift away from digital media. He dropped off social networks like Facebook and Twitter and began subscribing to consume more print media. Now he believes that his attention span may be coming back. "The good news is that the plasticity of our brain goes both ways," he says. "And if we change our habits, we can regain some of those things that we might have lost"

Read more on the To the Best of Our Knowledge website.