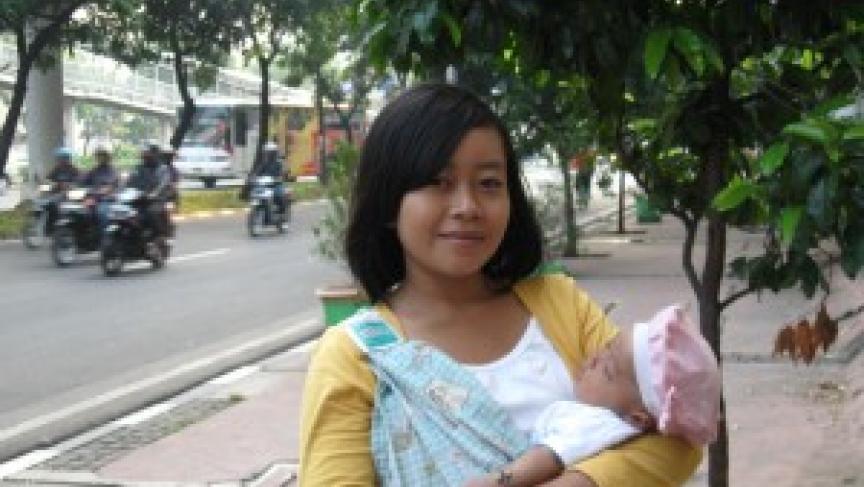 Twenty-year-old Litjak, cradling her two-month-old daughter, will ride with commuters who want to use restricted streets. (Photo: Sandy Hausman)

Story by Sandy Hausman, PRI's The World. Listen to audio for full report.

With 20 million vehicles on the streets each day, and with far less pavement than in big cities like New York, Singapore and Tokyo, traffic in Jakarta is terrible. Deden Rukmana, who teaches urban planning at Savannah State University, says the population of the world’s sixth largest metropolis has been growing so fast that the city can’t keep up.

To reduce the number of cars on the road, lawmakers have designated several main arteries as what they call “Three in One zones.” During the morning and afternoon rush, you can’t drive there unless you have at least three people on board. That’s why, near the entrances to the zones, men, women and children line up – raising their index finger – offering to rent themselves to commuters in a hurry.

Twenty-year-old Litjak climbs into a black sedan, cradling her 2-month-old daughter Nabilah. Together, they’ll help a college student get to class on time. The baby gives Litjak a competitive advantage, providing two passengers for the price of one.

Litjak says she can make at least two trips in a morning, collecting two or three dollars to help pay for household expenses. She never worries about her safety, and she likes the work. People who can afford to pay have nice cars, so she sits in air conditioned comfort, listening to the radio.