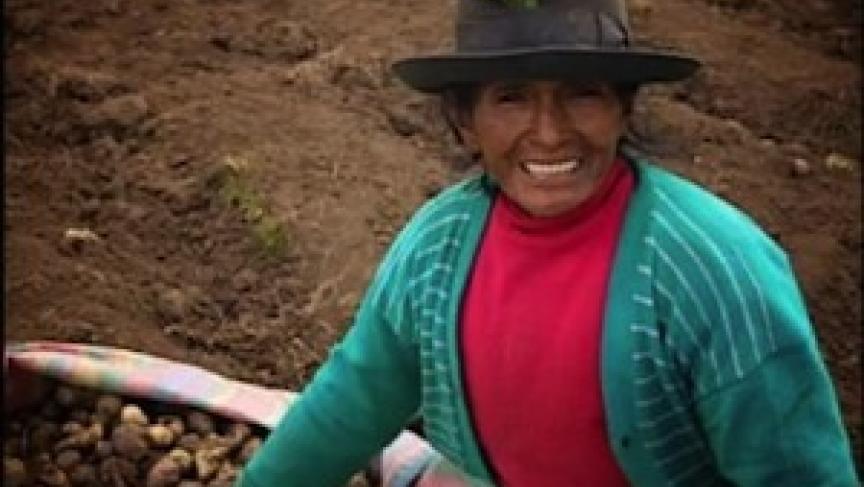 A local farmer with a harvest of huana, drought- and frost-resistant potatoes. (Photo: Cynthia Graber)

To get to some of Peru's most remote Andean communities, you head out over pockmarked dirt roads from a small town already 10,000 feet up. Up – up – up — past llamas and alpacas and sheep and cows. The vegetation thins out and the air becomes even thinner. Your lungs clamor for oxygen and you're offered coca leaves to help adjust to the altitude.

And then, after four hypnotic hours, you've arrived – at a patch of sparse farmland near the town of Pomacocha, at 13,000 feet an outpost at pretty much the upper limits of agriculture.

For centuries, Pomacocha's thousand or so residents have grown corn in the fertile valleys below the town and potatoes on slopes that push against the sky above, fed by seasonal rains and glacial streams.

But climate change is hitting the high Andes hard. Temperature and precipitation swings are becoming more extreme, the glaciers are shrinking fast, and a tough place to farm is becoming even tougher.

So to help them deal with an uncertain future, residents are looking back in time—to before the arrival of Europeans.

From a field of brown soil, Pomacocha resident Mariano Ccaccya unearths a small, pink potato—a huaña, one of the first to be grown here in decades. The huaña is the native potato in this part of Peru, but Ccaccya says it had fallen out of favor in recent decades and was about to disappear.

Huaña are bitter, Ccaccya says, and it takes a lot of work to make them palatable. But he says there are good reasons to grow them in times of increasing uncertainty.

Ccaccya, who's the local head of a nonprofit group that's leading an effort to revive ancient Andean crops, says huañas can be stored for two or three years, more than four times as long as most other potatoes. Ccaccya's colleague Adripino Jayo says huañas also resist frost, hail, extreme rain and drought.

"It's very, very strong," Jayo says. "Now that we're in the crisis of climate change, it's worth recovering these potatoes."

Others think so too. Jayo and Ccaccya's organization, Cusichaca Andina, recently won a grant from the World Bank to further its efforts to promote a variety of resilient ancient Andean crops, including quinoa, amaranth, and different types of potatoes and squashes.

But changing what's grown here is only part of the plan. Cusichaca Andina is also looking to the past to try to change how crops are grown.

On a steep slope in a valley about two hours from the potato fields, Jayo pulls away a stand of brush to reveal an overgrown rock wall. He says the stones are part of a long-abandoned system of agricultural terraces, built into Peru's mountains by the Incas more than 500 years ago.

Terraces like these once blanketed thousands of square miles of the Andes, and were described in the 17th century book The Royal Commentaries of the Incas, by Garcilaso de la Vega.

"They built level terraces on the mountains and hillsides, wherever the soil was good," De la Vega wrote. "And these are to be seen today in Cusco and in the whole of Peru."

Just a small fraction of the terraces are still used today. After the European conquest, Spanish crops and agricultural systems largely displaced traditional ones.

Ccaccya says they have a lot of benefits. The terraces help channel water for irrigation while avoiding erosion. They can hold water for months, which is crucial in a place with only intermittent access to water. And plants grown on them are more productive, he says.

"The Cisterns, or Conservatories, were about twelve foot deep, in channels made of hewn stone," de la Vega wrote, "and rammed in with earth so hard, that no water could pass between… But the Spaniards little regarded the convenience of these works, but rather out of a scornful and disdaining humor, have suffered them unto ruin, beyond all recovery."

Centuries later, the digging and hammering of a handful of men near Pomacocha suggests that the ruin of the Incan irrigation channels was perhaps not quite beyond all recovery. The workers are chiseling and lining up stones along a long-abandoned canal once used to divert water from a nearby spring.

"It's always been here," Jayo says, pointing at the stone canal. "It's probably from pre-Incan times, but it's still useful for irrigation, with a little help."

It's all part of an effort to increase the resilience and food security.

But the leaders of Cusichaca Andina realize they can only make a small dent in a vast need. Jayo says the Peruvian government has a big role to play as well.

"We see the difficulties in the national context," Jayo says. He says the group wants politicians in Lima to apply what it's doing across all of the Andes.

So far national politicians haven't picked up that slack.

But the work here may have relevance to mountainous regions beyond Peru. For instance Cusichaca Andina's founder, British archaeologist Ann Kendall, recently traveled to China. The world's largest country faces huge challenges from climate change and water shortages. And it also happens to have its own system of ancient mountain terraces that Kendall thinks may just be waiting to be revived.

Read the rest of this story and view a slideshow of Pomacocha farmers on The World website.