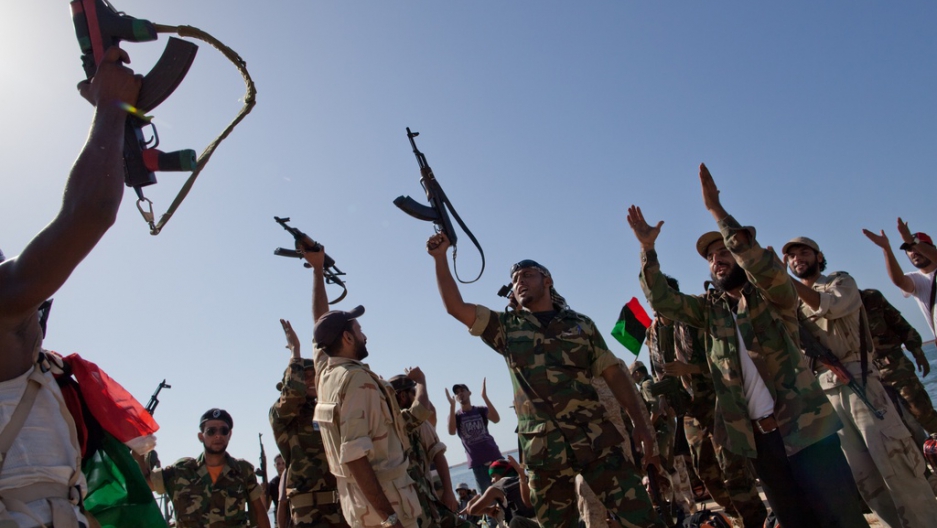 TRIPOLI, Libya — Nissar Hisame was enjoying the afternoon sun at the front of his home last week. As he sat chatting with school friends, the familiar sound of celebratory gunfire echoed in the distance. Victorious rebel fighters were enjoying their daily frivolity in celebration of Muammar Gaddafi’s fall.

The peaceful scene was suddenly shattered as a stray bullet fell from above. The bullet, assumed to be one of thousands shot into the air that day, lodged in the 15-year-old's brain.

GlobalPost in Libya: Video: on the ground in Bani Walid

Three days later, he still lay in a comma at Tripoli’s Central Hospital with multiple brain contusions and hemorrhaging.

Doctors are hopeful Nissar will recover in time, but others have not been so lucky.

“Every few days we see cases like this,” said Anwar Ali, a volunteer nurse at Central Hospital’s intensive-care unit. “A few days ago, a 1-year-old child died in the bed next to Nissar’s. He was hit by a falling bullet as he played with his grandfather in their family home.”

More from GlobalPost: Women of the revolution

Over the past week, nurses recalled several cases of patients hit in the head and shoulders by falling bullets. Two children, 6 and 11, were struck by bullets that penetrated within millimeters of their hearts. Both were lucky to survive.

“We can tell from the angle and velocity of the bullet that it has fallen from above,” said Khawla Zattage, one of the intensive-care nurses. “These patients have mostly been hit while at home or walking in the street.”

Tripoli police have this week launched a campaign to control the use of weapons within the city. Over the past three nights, security personnel have stood guard in Martyr's Square — previously the scene of the majority of celebratory fire — issuing warnings to trigger-happy soldiers.

Earlier in the week, the explosion of gunfire was almost constant throughout the night, but by Saturday the scene appeared more controlled.

A new sign in both Arabic and English read, “To all rebels. Please stop shooting fire in the air. It risks people’s lives — The Battalion rebels of Tripoli.”

Occasional outbursts would erupt, triggering fire across the square as shells flew into the ducking crowds. Guards acted quickly, screaming, “Enough, enough!” to calm the scene.

“We tell them to stop shooting, but everyone is so happy,” said one guard before rushing off to stop another carload of rebels from firing above the crowds.

Hisham Gnaba, 36, is the National Transitional Council's military representative in charge of the area that covers Martyr’s Square. At the local police headquarters on Saturday evening, Gnaba explained that as part of their campaign to restore security to the area, police are also stepping up efforts to crack down on unregistered weapons.

Gnaba said that during the conflict, weapons were taken, found, stolen and given away to rebel fighters and civilians across the country. Members of rebel units still involved in keeping the security of the city have been issued identity cards and their weapons registered. When they're no longer needed, they will have to turn in their weapons, Gnaba said.

Libya: For the love of guns, mass proliferation of small arms is worrisome

For those with unregistered weapons, an amnesty was announced several days ago in mosques and over loudspeakers in the streets. Gnaba said that so far, 25 rifles and three grenade launchers have been handed over within the area under his control.

As he handed in an AK-47 rifle on Saturday, 26-year-old Zackaria Ramadan explained that although he was never involved in the conflict he obtained the weapon to protect his young family.

“The local media told us that rebels were attacking civilians, raping women, stealing from homes, but since the rebels have come I have seen the opposite,” Ramadan said. “I got this rifle for protection, but I no longer need it.”

Gnaba says the initial message began with a polite request, but police have now begun arresting anyone found with an unregistered weapon. Those caught have their weapons confiscated and the owner is brought in for questioning, he said. Most are released the same day, but suspicious cases are processed through the military court.

The problem is not only celebratory fire, but with inexperienced owners, accidental fire is also the cause of numerous causalities and fatalities.

Staff at Central Hospital said they receive around 15 cases per day of injuries due to “friendly fire." Most of these come from the careless handling of unsecured weapons and reckless firing in populated areas.

In the streets, children are commonly seen playing with loaded weapons that had been carelessly left out by adult relatives.

Even among the rebel forces, the majority had never fired a weapon before joining the frontline.

During his time as a trauma doctor in the Nufusa Mountains, Dr. Ali Allrahibi said he saw many accidental shootings, most commonly young rebel fighters that had shot themselves in the leg or foot.

Allrahibi said his ambulance team lost a dear friend and inspiring colleague when a rifle went off unexpectedly while the doctor was “joking around with a friend." He was shot in the head, and died instantly.

With the multitude of weapons that have flooded the country over the past six months, the problem will no doubt be ongoing for some time to come.

In the meantime, the sound of jubilant gunfire continues to ring out across the capital.

“Five times a day, when we hear the call to prayer, we shoot two bullets in the air in memory of our dead comrades” despite warnings from the police, said rebel fighter Ahmed Zintani, after firing a mounted gun from the back of a modified pickup truck.

When asked if he was aware of the damage a falling bullet of this size can inflict, Zintani answered, “Everything is predestined by God. If you are destined to be hit by a falling bullet, then you’ll get hit, no matter what.”