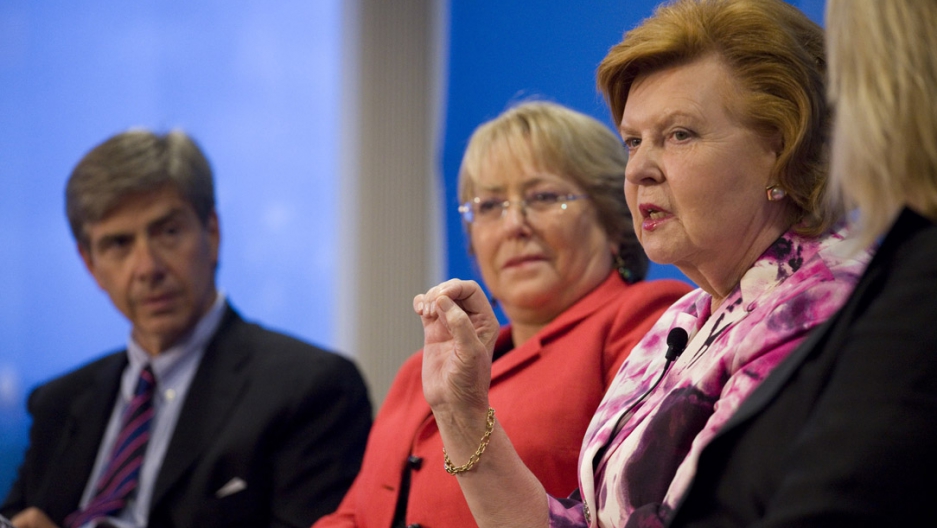 Sometime this fall, the world’s population will reach 7 billion people. Experts now forecast that by 2050, the population could be 10 billion.

Those numbers, said the former presidents of Chile and Latvia at an event in Washington D.C., Wednesday night, should force policy makers to focus more intently on making family planning much more widely available in the developing world.

“When we are 9, 10 billion people, what are we going to do? Go to Mars? Go to the moon?” said Michelle Bachelet, the former president of Chile and now the Under Secretary-General and Executive Director of UN Women, the latest agency created by the United Nations. “We are really going to have huge problems. Family planning is a huge issue.”

Her comments came during a series of discussions organized by Aspen Global Health and Development called “7 Billion: Conversations that Matter.” The talks, funded in part by the US Agency for International Development, have often centered on global health issues, and Wednesday’s event was no different.

Family planning, an issue that draws political sparks in Washington because many conservatives equate it with abortion, even though US law prohibits funding for abortions.

“Family planning is essential for many of the problems” ahead, Bachelet told an overflow crowd at Aspen Institute. “… Look at maternal mortality. Every day, 1,000 women die due to pregnancy and complications during birth. That’s unacceptable. We are in the 21st Century. We know exactly what we have to do.”

She continued, “Who are the ones who are dying? It’s exceptionally young women – 15 to 19, or up to 24. If you maintain girls in school as long as possible, … you can avoid early forced marriages. If you think of family planning, if a woman decides on her own how many children she can have, we are enabling her to do what she wants. … Family planning for me is essential. It’s an essential right. If you have a woman who has those rights respected, you have a woman who can be making choices and can unleash all their capacities and potential.”

The discussion also touched on issues of gender inequities. The subject started with a question about the use of selective abortion, in which ultrasound technology allows couples to abort fetuses based on gender. That has led to higher numbers of boys born in certain countries, including India.

Vaira Vike-Freiberga, former president of Latvia and a member of Aspen’s Global Leaders Council for Reproductive Health, said she believed those issues would eventually “even” out.

“Countries are now finding themselves in a bind,” she said. “Several generations of young men are in need of partners. In some villages, it is getting pretty dramatic, five boys to one girl. Life itself will teach them a painful lesson.”

Bachelet also brought up another factor behind gender inequity: The majority of care giving follows to women. She called it “the economy of care.”

“Even in the most developed countries, you see women as a minority in the decision-making positions,” she said. “… If every time a child is sick, or someone needs to take care of an elderly person, it is a woman who takes care of them.”

If that isn’t changed, she said, “it will be really difficult, for cultural, political and structural reasons, to change the way society can respond in a way (to give) women opportunities.”

The discussion on reproductive health and family planning in particular should pick up later this month. Just yesterday, the UN Population Fund, in a New York City, meeting called for more voluntary family planning and greater access to contraceptives.

And on Sept. 19, just ahead of the United Nations’ 66th general assembly, Aspen will bring together eight heads of state and high-level policymakers in New York to call for countries to invest more in family planning and reproductive health. The latest estimate on the number of women who lack access to family planning services in developing nations: 215 million.