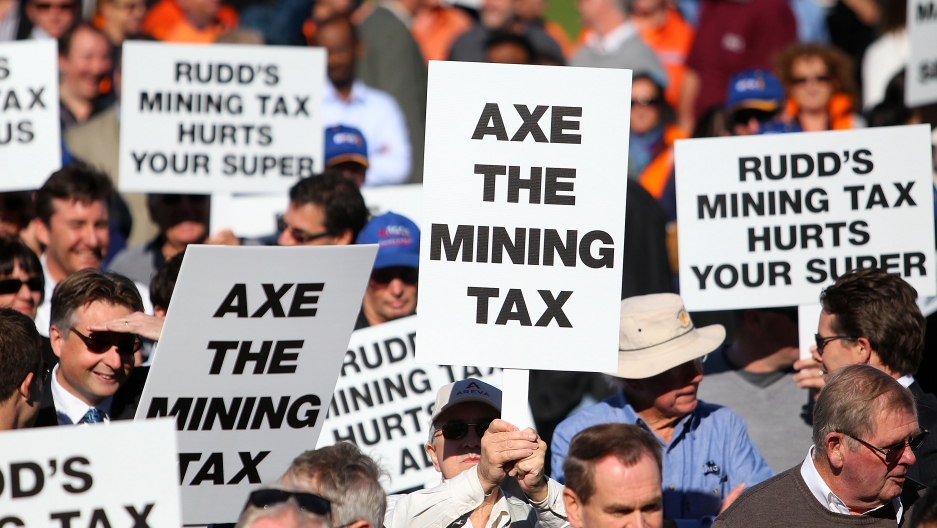 Protesters rally in Perth, Western Australia, against the government's proposed mining tax, targeting an address by Prime Minister Kevin Rudd to the Perth Press Club on June 9, 2010. Rudd was in Western Australia to campaign for his proposed 40 percent resources super profits tax amid falling approval ratings in recent polls and strong opposition from the mining industry.
Credit: Paul Kane
Share

The Australian economy owes everything to the mining industry and its capitalization on the demand for natural resources from energy-thirsty emerging economies like China and India.

Don't be so naive, says a local think-tank, the Australia Institute, whose report just out says that the mining industry has persuaded Australians that it's far more important to the economy than it actually is.

The West Australian, flagship paper of the boom state that has arguably done more to push the story of Australia's mining fortunes than any, puts it thus:

The mining industry has convinced Australians the sector employs nine times more workers and accounts for three times as much economic activity as it actually does, and that it is 30 percent more Australian-owned than in reality.

The Australian, meantime, lets economist Richard Dennis — author of the research paper "Mining the Truth: The Rhetoric and Reality of the Commodities Boom" — do the talking:

"The mining industry likes to portray itself as a big employer, a big taxpayer and a big money-maker for Australian shareholders, but the reality just doesn't match the rhetoric."

Dennis, quoted by Australia's ABC news, says mining in Australia employs the same number of workers as manufacturing — and that's in a country not known for its manufacturing prowess.

That accords with Australian Bureau of Statistics figures, which show mining as accounting for 9.2 percent of GDP, "although that doesn’t include flow-on effects to other sectors like construction, finance and manufacturing," according to Mining News.

Perhaps worse news for many are the report's claims that 83 percent of the mining industry's profits are being sent offshore, while only a small number of Australian investors reaps any substantial share price rewards from the big resources companies.

"According to the ABS the total pre-tax profits earned by mining firms operating in Australia was more than $51 billion in 2009-10. If these profits were distributed evenly across Australian households the dividend check received by each household would come to more than $5,000. But of course the ownership of Australian mining companies is far from evenly distributed across the Australian community, as already noted."

The Minerals Council of Australia, meantime, has dismissed key claims in the report on behalf of industry, telling the Australian that: "The Australia Institute has dressed up its ingrained prejudice against the mining industry in a deeply flawed report that flies in the face of common sense and established facts."

And miners say they pay high taxes and are investing billions of dollars in their local operations, "not just funneling windfall profits offshore," the West Australian reports. Further:

The Chamber of Minerals and Energy says WA's resources sector directly employs about 90,000 people and indirectly a further 300,000. It is also the biggest private employer of Aboriginals.

One wonders if they've taken into account Australia's most recent employment figures: a government report released Thursday showed employers unexpectedly cut jobs in August for a second straight month. The jobless rate climbed to 5.3 percent, the highest since October, from 5.1 percent in July, Bloomberg reports.

That's good news for the dollar, held at crippling high levels by Australia's relative economic strength, thanks largely to — you guessed it — the mining boom.

Australia's dollar has traded above US $1 for most of 2011 thanks to demand for the nation's resources, particularly iron ore and coal. However, the Aussie fell against all of its 16 major counterparts Thursday on the poor jobs data.

The ABC quotes Dennis as saying that "the Australian public will miss out on billions of dollars of revenue it was set to receive" under a federal mining tax (more precisely, a 40 percent resources "super profits tax" proposed by deposed Prime Minister Kevin Rudd) that was watered down from its original state (by his replacement, Julia Gillard) owing to high-level objections from ... the mining industry.

Or as the report politely puts it — "because the mining industry was able to negotiate a different deal with the new Prime Minister Julia Gillard" which "resulted in a much less effective, and much less equitable, mining tax [the minerals resource rent tax] being negotiated."

A rethink of policy related to mining? How about a complete undermining...