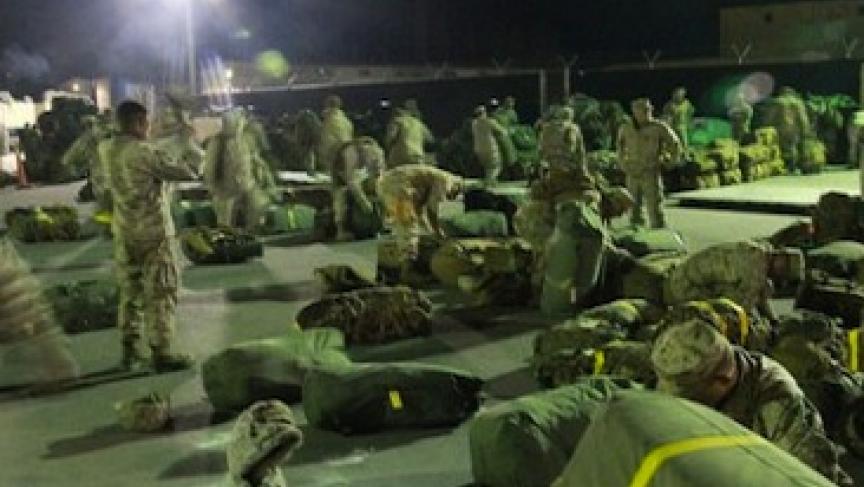 US Marines with Headquarters Battalion, 1st Marine Division (Forward) pack their gear on pallets at Camp Manas, Kyrgyzstan (2010), prior to their flight to Afghanistan. (Photo by Chief Warrant Officer 2 Jason M. Carter, US Marine Corps)

Story by Lily Jamali, PRI's The World. Listen to audio above for full report.

US military strength has long depended on the willingness of foreign countries to host American bases. The Arab Spring has shed light on Washington’s relationship with strategically important nations, like Bahrain, which have quashed calls for democracy among their own people.

The small Central Asian country of Kyrgyzstan has hosted a military base since shortly after the Sept. 11 attacks. “Manas Transit Center” has withstood two revolutions in Kyrgyzstan – one in 2005 and another in 2010.

After that uprising, base commanders decided to reach out to the local population, and some analysts say it’s time to do the same in the Middle East.

After spending the past year in the Shindand province of Afghanistan, US Army Sergeant Andrew Stone is finally able to pack up his flak jacket and head home.

“It’s a long day – no sleep – trying to get prepared to come here and it’s a long schedule for the flight so a lot of preparation to come back,” Stone said.

Stone and his unit are heading back to Ft. Hood, Texas through Manas Transit Center in Kyrgyzstan.

Nine out of ten US service members serving in Afghanistan pass through this base. Manas Transit Center also handles 30 percent of air refueling operations for the NATO mission, and serves as a key passage point for supplies.

Since Americans arrived here in 2001, Manas Transit Center has been both a financial boon and a political hot potato in Kyrgyzstan, a former Soviet republic with strong ties to Moscow. Russia also has a military base here.

In 2006, Former President Kurmanbek Bakiyev evicted the US, apparently under pressure from Moscow, only to change his mind after Washington tripled the rent. Bakiyev was ousted in a violent uprising last year.

Professor Alex Cooley of Barnard College studies the politics surrounding US military bases abroad. He says up until Bakiyev was forced out, Washington made the same compromise that now plagues its policy throughout the Arab World: supporting an unpopular strongman in exchange for a military stronghold.

“When the Bakiyev regime collapsed here, there was a lot of antipathy toward the base and allegations that the embassy had cut off links with the opposition, that it had not criticized the human rights violations, attacks against journalist, regression in freedoms … all because of the presence of the base,” Cooley said.

As a new world order emerges from the Arab Spring, Cooley says now more than ever Washington needs to challenge authoritarian host countries on touchy topics like human rights.

“It’s much better to try anticipating political change and position yourself for the possibility of greater liberalization than to become a guardian of the status quo, which is really the fallback position when we contract with authoritarian or semi-authoritarian states,” said Cooley.

Cooley acknowledges that it’s a delicate diplomatic task. But he says the money the US spends on its bases can be used as leverage. And he says there needs to be another change: The US has to reach out to the public, not just a host country’s government – or ruling family.

Since Bakiyev fled, the US Air Force has overhauled its public relations strategy in Kyrgyzstan. They shed their low profile and started inviting in local media. Last October, they launched a Russian language website, followed by a Kyrgyz version in May.

“Oftentimes in the past, there have been rumors about the Transit Center and things that we do or don’t do,” said Col. Dwight Sones, who was the base commander until earlier this year.

“But by being as transparent as possible, those rumors and hearsays are all dispelled and people go ‘you know what? It’s not as clandestine as we thought it was originally.’ And I think that’s been the difference the past year,” Sones added.

Military leaders here are eager to tout the millions of dollars the base pumps into the local economy. The US Air Force puts out a newsletter every month detailing economic development projects it funds around the country.

Some American dollars end up in the pockets of locals. Anastasia Mialenko sells Kyrgyz textiles at a bazaar on the base twice a month. Mialenko estimates as much as three quarters of her income comes from selling at this market.

But the money earned by people like Mialenko is a relative pittance. Big-ticket items like fuel contracts have the potential to upset the shaky trust the US has managed to cultivate.

Media in Kyrgyzstan are watching closely to make sure the US doesn’t sign any more sweetheart deals with government officials, or their family members.

At the swearing-in of the incoming base commander this summer, one Kyrgyz reporter asked who’d be next to supply jet fuel to American forces – a contract worth hundreds of millions of dollars.

Despite the troop drawdown in Afghanistan, Washington still wants a military footprint here, possibly for years to come. The US experiment with openness in this volatile place could become a model for how US bases operate around the world.