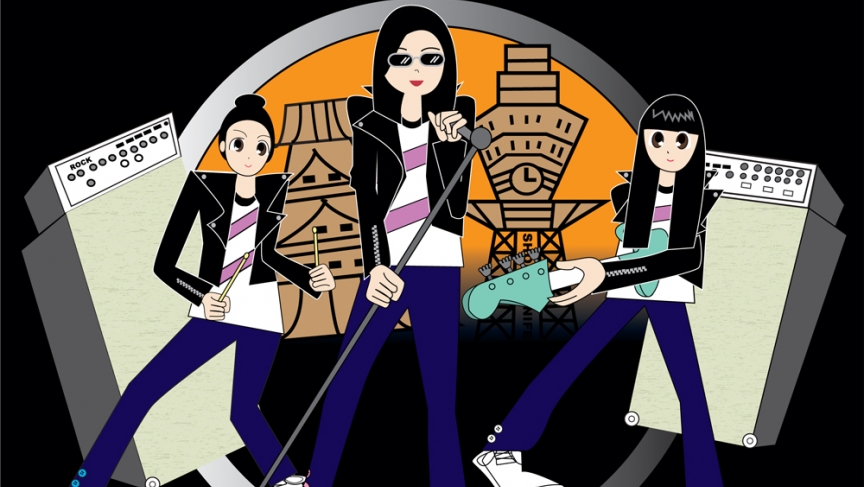 Share
Japan's pop-punk girl group, Shonen Knife, is celebrating its 30th anniversary this year with a tribute to its favorite group, the Ramones. The group's latest album, "Osaka Ramones: Tribute to the Ramones" covers 13 of Shonen Knife's favorite songs from New York City's legendary punk group. Maria Bakkalapulo finds out how this three-piece Japanese punk band got to where they are and what is it up to now. By Maria Bakkalapulo When the Ramones released their first album in 1976, their sound changed everything. The group perfected a rapid-fire, two-minute song style that would be emulated by many rock bands — from the Sex Pistols to Green Day. These days, no one does Ramones-style rock quite like Japan's venerable Shonen Knife. The crowd erupts at Glasgow indie club, Nice 'n' Sleazy as Shonen Knife tears into songs from their latest album, "Osaka Ramones". The youthful 50-year-old lead singer and guitarist, Naoko Yamano has loved the group since she was a teenager, and chose to record the album as a celebration of her three decades in the industry. "I first listened to the Ramones songs on the radio in Japan. It was late 70's. And I rushed to the record store and get their vinyl," says Naoko. "Then I started Shonen Knife, and we had our original songs but we wanted to cover some songs from our favorite bands and we chose Ramones songs." That was in 1981. Naoko was joined by her younger sister Atsuko on drums and friend Michie Nakatani on bass. Shonen Knife's hit song "Banana Chips" may not seem especially profound, but it was groundbreaking. The women at the time were working as office clerks and lived with their conservative middle-class parents, who discouraged them from playing rock. They even insisted the band hide their guitars. In some ways, this made Naoko work harder, creating songs with quirkier subjects than the standard pop fare. "I am ashamed to write songs about love and I don't want to write songs similar to other bands," says Naoko. "Other bands, usually write about love songs. So I like to write about my daily life. When I find something interesting I write down the keyword down in my notebook. For example, I write in my book … I like banana chips. Banana chips are so tasty. When I write songs I expand the keyword and put a melody on it." That's in part why Naoko loves the Ramones — simple but eloquent lyrics and fun music. Shonen Knife got its big break in 1986 when the group was featured on the Sub Pop 100 compilation album, one of the early releases by the influential grunge label. A few years later, Shonen Knife toured with Nirvana. they also landed major record deals, MTV appearances and a spot on the alternative rock mega-fest Lollapalooza in the early 1990's. Shonen Knife has gone through lineup changes, but Naoko has always remained part of the band. Drummer Emi Morimoto joined last year. In 2006, Ritsuko Taneda started playing bass with the group. "When I was a high school student, I heard 'Riding the Rocket'" I thought, wow, Japanese Beatles," says Ritsuko. The mix of the Ramones and original material at the show was well received by fans new and old. Glenda Nugent is in her 40's and saw Shonen Knife play nearly 20 years ago. She was blown away by the music, and the band's longevity. "Three girls from Japan and who started off 30 years ago when it wouldn't be so comfortable to watch that, going 30 years on and still get me downstairs and make me dance when I've seen loads of bands and I'm usually not bothered," Glenda says. "I was really impressed." Shonen Knife plays in a new city almost every night in the UK as the band's 30th anniversary tour continues. The Japanese punk rockers will show up in Canada and the US in October.