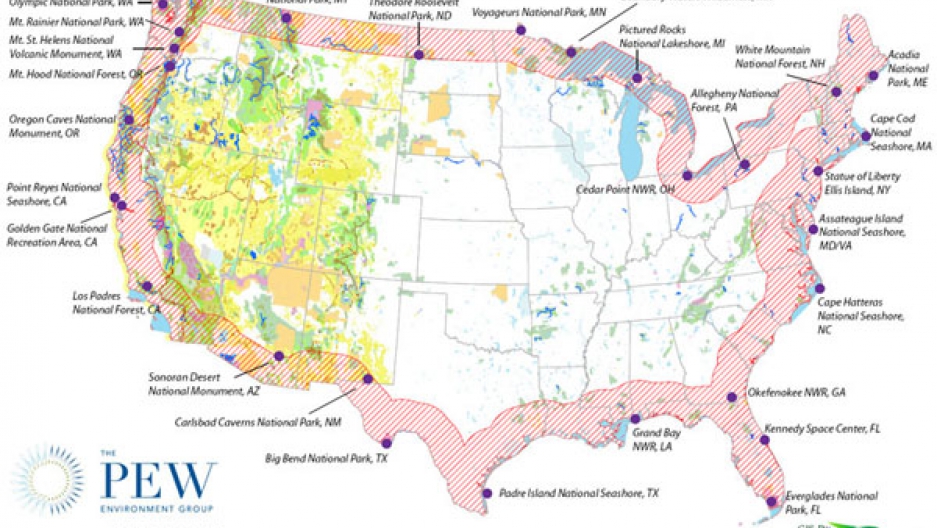 The Pew Environment Group has released this map of public lands it says would be affected by HR1505.

Imagine yourself for a moment on the slopes of Washington's Mt. Rainier, near Puget Sound, one of the highest peaks in the western United States.

"We are on the hike to Comet Falls in Mount Rainier national park. We're looking at a number of cascades that are rushing down a rock canyon and we're sitting over a wood trail bridge" says Tom Uniack who doesn't have to imagine it. As conservation director of the Washington Wilderness Coalition he comes here often.

Mt. Rainier National Park is one of the natural jewels of the northwest. And it seems utterly untouched by the changes that have rippled across the US in the years since 9/11.

But a bill now pending in Congress could change that. HR1505, as the bill is called, would allow the Department of Homeland Security to build roads, transmission lines, and security installations on any federally owned land within 100 miles of the US coast or border. Tom Uniak says that includes national Forests, wilderness areas and National Parks like this one.

"The bill is written in a way that all these things, potentially, if seen as part of the national interest or national security, could apply and laws could be exempted."

Altogether, the bill would allow DHS to override 36 environmental and other laws on these federal lands in the interest of border security, including such bedrock laws as the Endangered Species Act, the Clean Air Act and the Clean Water Act.

Representative Rob Bishop is the Utah Republican who introduced HR1505:

"Wilderness designation in no way should trump border security."

"They can do what they need to do on private property, it's only on public property that they're restricted and that is ridiculous. That's simply asinine."

The bill would allow DHS to basically do whatever it thinks it needs to do in order to achieve "operational control" of public lands within 100 miles of the US border.

That means keeping out terrorists and illegal immigrants. In particular, Congressman Bishop says it's necessary to secure parts of the US border in Arizona, where he says large numbers of illegal immigrants cross the border from Mexico.

"To my belief it's because 80 percent of the Arizona border with Mexico is federal property, over half of that is wilderness designation, Endangered Species habitat, conservation habitat where the border patrol is limited to the kind of access they have and what they can do," says Bishop.

But opponents of HR1505 say the bill would give unprecedented authority to a single federal agency to ignore environmental laws.

Jane Danowitz, of the Pew Environmental Trust in Washington, DC, says there's a lot more at stake than just the Arizona desert or Mt. Rainier. A huge amount of public land would fall under the bill's scope.

"We're talking about some of the nation's most popular national parks and beaches. Glacier National Park, the Florida everglades, beaches along Cape Cod, the great lakes and the California coastline."

Danowitz says the bill is overkill.

"After 9/11 national security for all the right reasons jumped to the top of America's priorities but the sweeping waiver of our bedrock environmental laws has little to do with accomplishing that goal."

What it does have to do with, Danowitz asserts, is a rising anti-environmental movement in Congress. "There's going to be a lot of things happening this fall in Congress that are under the radar. There are more than 70 provisions that would undo longstanding protections for clean air, clean water, wilderness, endangered species."

Regardless of the intentions of its sponsors, it's not just environmentalists who oppose this bill. The very agency that supporters say will benefit the most from HR1505 — Customs and Border Protection — doesn't want the power it would be given.

When asked about a testimony in July in which the Customs and Border Patrol said it opposes 1505, Congressman Bishop replied: "I will tell you right now privately, when I talk to people who are current Border Patrol personnel as well as those who are retired Border Patrol, they have a different story than this current administration has."

Along with Representative Bishop, HR1505 has 48 co-sponsors in the House, all Republicans.

The bill, which is officially titled the National Security and Federal Lands Protection Act, will begin working its way through the House early this fall. Ashley Ahearn reports for EarthFix, a public media project that explores the environment of the Pacific Northwest.