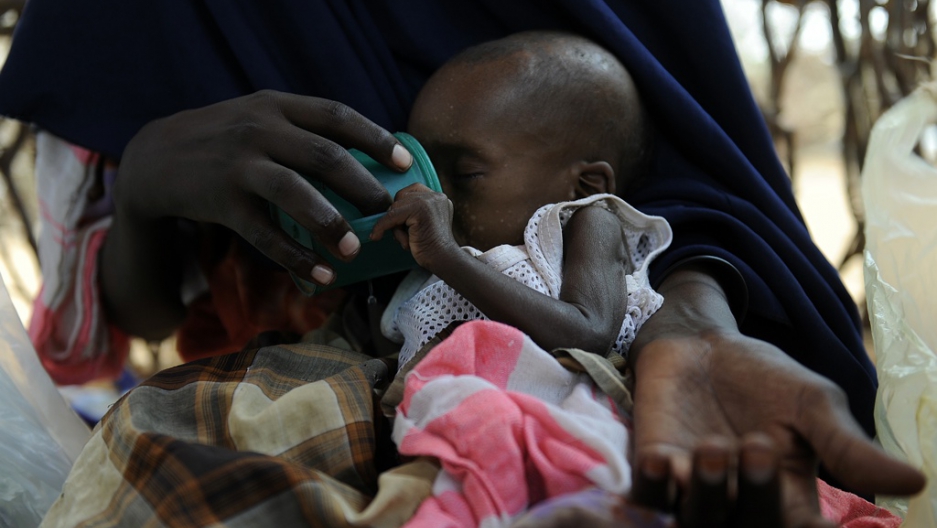 NAIROBI, Kenya — Tens of thousands of people have already died, hundreds more are dying every day and 750,000 are facing starvation in the expanding famine zone in southern Somalia, according to the United Nations.

The U.N. announced on Monday that the famine has worsened and spread to a sixth area in the south of Somalia.

The U.N. says that hundreds of people are dying every day and that 4 million people in Somalia — more than half the country's population — now need emergency food aid.

Across the Horn of Africa more than 12 million people are facing food shortages as a result of drought but it is only in war-torn Somalia that famine has been declared.

Normal rains are predicted in October, but while rainfall may break the drought it is more likely to bring disease than respite for the 4 million facing food shortages.

“We can’t underestimate the scale of this crisis,” said Mark Bowden, the U.N. humanitarian coordinator for Somalia. He added that previous famines, in Somalia in 1992 and Ethiopia in 1984, showed that “the majority of mortality comes from outbreaks of communicable diseases.”

Most of the dead and the dying are children who, weakened by malnutrition, succumb to common diseases like measles, malaria and diarrhea all of which spread more quickly when the rains come.

The latest area in which famine has been declared is Bay region, Somalia’s agricultural heartland which produces around 80 percent of the staple sorghum crop. According to U.N. figures the recent harvest was the worst in 17 years, producing just a quarter of the average annual crop volumes.

“The harvest failure serves to emphasize that the agricultural producing areas of southern Somalia are the most affected,” said Bowden.

Famine levels of malnutrition have been far exceeded in Bay where 58 percent of children are acutely malnourished.

“This is a record rate of acute malnutrition and certainly something I’ve not seen while I’ve been working in this field,” said Grainne Moloney, chief technical officer at the U.N.’s Nairobi-based Food Security and Nutrition Analysis Unit which collects and analyzes data on the famine.

Famine has previously been found in Somalia's Lower Shabelle, Bakool and Middle Shabelle regions as well as in the camps for displaced people in and around Mogadishu. Moloney warned the situation will worsen.

“The outlook for the next three months is that we continue to see a huge food access crisis in the agricultural areas in the south. We still anticipate that populations [in another] three regions will go into famine,” she said.

Almost all of the famine areas are controlled by Al Shabaab, the armed Islamist insurgents with links to Al Qaeda that has in recent years fought a brutal war against the U.N.-backed government in Mogadishu.

Last week the medical charity Medecins Sans Frontieres (Doctors Without Borders) accused other aid agencies and the media of “glossing over” the real “man-made” reasons for the famine in Somalia as well as the difficulties of accessing parts of the country.

“The emergency unfolding in and around Somalia is being portrayed by many aid organizations and the media in one-dimensional terms, such as ‘famine in the Horn of Africa’ or ‘worst drought in 60 years’,” said MSF president Unni Karunakara.

This portrayal ignores the impact of Somalia's ongoing civil war and allows people to believe, wrongly, that “the solution lies in merely finding funds and shipping enough food,” said Karunakara in an opinion piece published in a British newspaper.

Karunakara said raising money was not enough and urged aid agencies to admit, “We may never be able to reach the communities most in need of help.”

His comments have angered some aid workers who fear that questioning the effectiveness of the relief work in Somalia might affect fund-raising efforts.

Some agencies issued statements stressing their own ability to reach populations in need in Somalia. Save the Children said it has worked in Somalia “consistently for the last 20 years” adding that “Delivering aid is notoriously difficult but it is possible.”

Others, including the International Committee of the Red Cross and Islamic Relief, insist that they are able to reach the starving in areas held by Al Shabaab.

Bowden sought to defuse the growing row amongst aid agencies over their response to the famine.

“It is always unfortunate to see in-fighting,” Bowden told GlobalPost.

He insisted that aid was reaching increasing numbers of people, often through local organizations that he said he could not name for security reasons.

“We’ve never claimed that this is not a very difficult operation,” Bowden said. “[But] overall there is a far greater level of coverage than we had anticipated.”

He said that more than 1 million people inside Somalia received food aid in August, up from 750,000 in July, and he said more money was still needed.

“Money does matter in this situation. This is not a cynical fund-raising opportunity," said Bowden. "It is a race against time.”