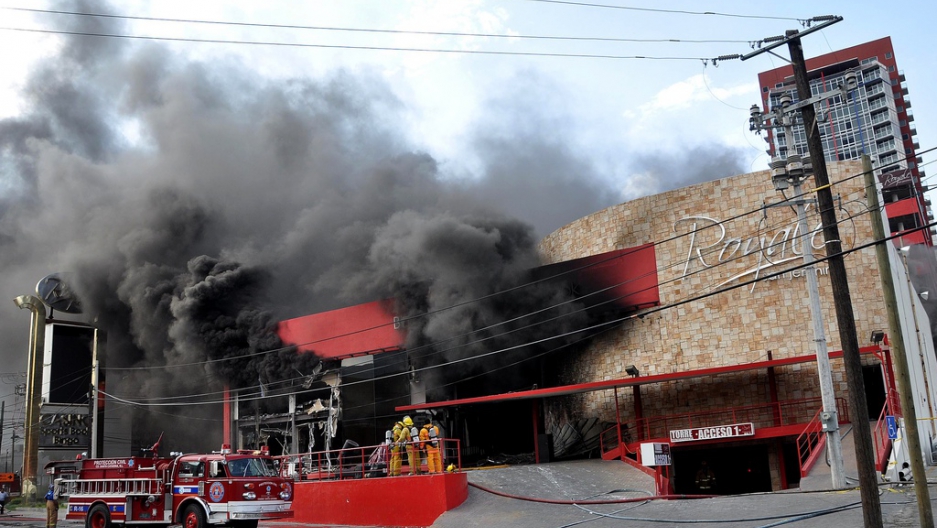 The Casino Royale smolders after 52 people died inside. Police say the owner failed to pay off a drug cartel.
Credit: AFP
Share

MEXICO CITY, Mexico — At a construction site of an apartment building in the heart of the Mexican capital, a company engineer runs through his weekly payroll sheet.

He has salaries written out for carpenters, bricklayers and electricians. At the bottom of the sheet is a notation of $200 for “security services” next to a nickname,  “El Indio” — the Indian.

“That is what we have to pay to gangsters to be able work on this site,” said the engineer, who asked that his name not be used, for fear of his safety.

“I have been building in Mexico City for 40 years, and have never seen anything like this extortion before. But the boss says we have to make the deal and pay up. If we don’t, we are scared that we might be found hanging from an overpass.”

As Mexico struggles with an unprecedented wave of drug-related violence, criminal cartels have been expanding protection rackets across the country. Business owners complain of extortion from the white beaches of Cancun to the political and business center of the republic, Mexico City. And few businesses are exempt: night clubs and car lots, private schools and even small mom-and-pop shops have been forced to pay for protection.

It’s a simple system: cartels inform businesses in their territory how much money they want, and when they want it. Those who don’t pay can be killed or see their businesses destroyed — or both.

On the Mexico City building site, a group of thugs approached the engineer when he began the development earlier this year.

“They didn’t physically hurt me, but they don’t need to," he said. "We all know what they are capable of."

He gives the payment, a bundle of cash stuffed in an envelope, to members of the gang who turn up at the building site every week. It's typical of how the payments are made across the country.

Due to the clandestine nature of organized crime, it is impossible to know exactly how much the protection rackets are affecting Mexico’s trillion-dollar economy.

In 2010, government figures showed that 6,236 businesses filed complaints to the police saying that they had been forced to make monthly payments ranging from as little as $100 to more than $10,000. The figure has risen significantly since 2007, when police recorded just 751 cases of business extortion.

Before President Felipe Calderon came to office in 2006 and declared a war on drug cartels, protection rackets were virtually unheard of in most of Mexico.

But as the conflict has escalated, cartels began shaking down businesses in the most hard-hit areas, such as the murder capital, Ciudad Juarez.

Last year, the extortion began spreading through the center and south of the country, including regions that haven’t typically been drug-trafficking routes, such as Mexico City, long considered a haven from drug violence.

Calderon has said that his government has been so successful in busting drug loads and arresting kingpins, that gangsters have turned to extortion out of desperation.

Many industry leaders agree, including Mario Sanchez, head of the Business Coordinating Council, a key business lobby. “When the bad guys can’t get their drugs over the border to the United States, they turn on businesses here,” Sanchez told GlobalPost. “But we can’t stand down from this fight. This is not caused by the government, but by the criminals.”

However, many independent think-tanks and journalists say that cartels have moved into extortion because they have gotten stronger, not weaker.

During Calderon’s administration, violence has increased dramatically. In 2006, when the president came into office, there were 2,000 drug-related homicides nationwide; in 2010, there were 15,000, according to the government’s own figures.

More from GlobalPost: Scared of going to Mexican resorts? President Felipe Calderon says not to worry

In total, there have been 40,000 drug-related killings tallied during the Calderon administration, including mass graves of more than 200 victims. Police have been so overwhelmed by murder cases to solve that they are largely powerless to stop cartels moving into — and fighting over — new territory.

This year, for example, cartels have been increasingly creeping into the capital, and carrying out gangland-style murders, such as the one on Aug. 26, when a corpse was found hanging from an overpass in Mexico City's plush Santa Fe district.

The protection rackets are also alleged to be the motive behind hundreds of deadly attacks, including the burning of the Casino Royale in Monterrey the day before that left 52 dead.

Police arrested five suspects in the casino fire, and said they had confessed to being members of the Zetas cartel. The men had attacked the casino, police said, because its owners failed to make a protection payment.

In August last year, gangsters burned down the Castillo del Mar bar in Cancun city, killing eight, an attack that police believe was connected to extortion.

Last month in the Acapulco resort, gas stations, jewelers and private schools all shut down temporarily to protest having to pay protection payments. Business leaders there demanded the government takes more action to stop the extortion.

“This is an extremely serious problem," says Luis de la Barreda, head of the ICESI, a Mexican think-tank on security issues. "When you can’t protect citizens and businesses from this violent intimidation, it shows the government is losing the battle against crime.”

De la Barreda estimates that for every reported shakedown, at least 10 more that go unreported. Police officers across Mexico have been arrested for being involved in extortion or other criminal rackets. "Most people are simply too scared to go to the police,” he said.

Many people are concerned that extortion will only make the violence worse, as rival gangs fight over the spoils they can get from shaking down businesses.

The engineer paying protection payments at the building site said that his employer also pays off gangsters from a cartel at an iron mine he owns in neighboring Michoacan state.

“The gangsters in Michoacan told him that they could get rid of the guys extorting the building site here,” he said. “I said, 'No way.' I don’t want to get caught up in a gang war. I am the one that has to come to work here.”