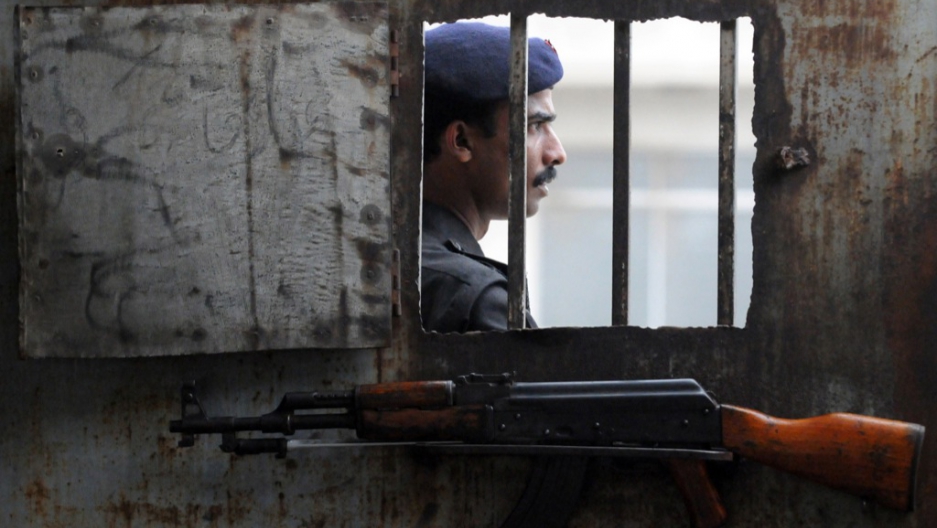 A Pakistani policeman stands at the gate of an anti-terrorism court in Karachi on August 12, 2011.
Credit: Asif Hassan
Share

ISLAMABAD, Pakistan — U.S.-Pakistani relations may not be as bad as they seemed.

Or so the Pakistani military would have us believe.

Ties between U.S. and Pakistani intelligence agencies are believed to be at an all-time low in the wake of the Bin Laden raid last May.

After U.S. Navy SEALS killed Bin Laden in the northwest of Pakistan without taking the Pakistani authorities into confidence, the Pakistani establishment got even more prickly than usual. Pakistan sent home U.S. Special Forces trainers, a move that prompted the United States to cut $800 million in military aid.

But on Monday, the Pakistani military released a statement saying the CIA had helped Pakistan’s main spy agency, the ISI, deal “another fatal blow” to Al Qaeda.

Have they really made up that fast?

According to the statement, it was the “strong, historic intelligence relationship” between the two countries that allowed for the two intelligence units to cooperate in the arrest of three senior Al Qaeda members from Pakistan’s southwestern city of Quetta, a dusty town a few hours’ drive from the Afghan border.

Of the three Al Qaeda members said to be captured, Younis Al Mauritani, is the most senior. The two others were named Abdul Ghaffar Al Shami, also known as Bachar Chama, and Messara Al Shami, who also goes by the name Mujahid Amino. The statement did not say when the three were captured.

Osama bin Laden is said to have personally asked Al Mauritani to focus on hitting targets of economic importance in the U.S., Europe and Australia, according to the statement. “He was planning to target United States economic interests including gas or oil pipelines, power generating dams and strike ships or oil tankers through explosive-laden speed boats in International waters,” said the statement.

Analysts say that it has been years since such a high profile Al Qaeda leader was captured. But they are largely divided over how to interpret the Pakistani military's statement.

“It is an important step to breaking down Al Qaeda, but also to improve the relations between both countries,” said one senior diplomat in Islamabad, who was not authorized to speak to the press.

But cooperation between intelligence units doesn't necessarily mean that relations between the countries at large are warming in any significant way, he said.

The ISI already has a better relationship with American intelligence than the Pakistani military does with the U.S. Army. “The army and its chief are more dependent on public opinion. They cannot act as independent as the ISI,” he said.

Asad Durrani, a retired lieutenant general and former head of the ISI, says that the arrest of Al Qaeda operatives, while helpful, will not alone bring about a significant shift in U.S.-Pakistan relations.

The two countries are, after all, engaged in active hostilities, he said.

“The drone attacks here and people from here killing other people over there is the low-intensity war. If something happens here, in Afghanistan or in the United States it’s not going to change the paradigm,” Durrani said.

Pakistan and the U.S. relationship hinges more on what happens in Afghanistan, he said, which is where the two countries need each other the most, analysts say. Even after the raid on Bin Laden, the two countries have been careful not to cut their ties completely.

The United States needs Pakistan’s help to forge a solution in war-torn Afghanistan and to offer a safe supply route for American troops in Afghanistan. And Pakistan would like to stay close to the powers that may shape a future Afghan government.

Quetta, where the three Al Qaeda operatives were reportedly captured, is widely believed to harbor Afghan Taliban fighters, but it is unclear whether the Taliban leadership also resides there.

Tommy Vietor, spokesperson of the U.S. National Security Council, confirmed and lauded the arrest of one senior Al Qaeda operative on Monday yesterday, though his statement didn’t name the operative.

Maj.-Gen. Athar Abbas, the current military spokesperson for the Pakistan Defence Forces, said the three Al Qaeda members are in custody in Pakistan, and being interrogated by the ISI.

Abbas declined to release more details about the investigation or whether there would be a trial. “We are not going to talk about it or disclose at this moment until the time the interrogation is completed,” he said.