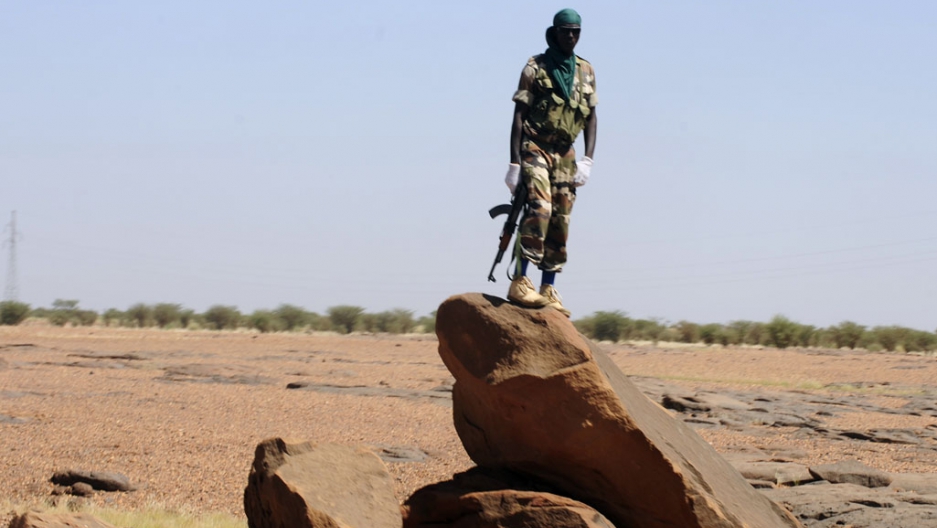 A convoy of dozens of military vehicles crossed from Libya into Niger passing through the desert town of Agadez on Monday evening, according to witnesses. In this picture, taken last year, a Nigerien soldier patrols the road between Agadez and Arlit, a popular route through the Sahara used by desert nomads and migrant workers.
Credit: Issouf Sanogo
Share

Witnesses in the desert town of Agadez in the north of Niger say that a convoy of dozens of military vehicles arrived giving rise to speculation that Muammar Gaddafi may have fled Libya.

Abdoulaye Harouna, owner of a local newspaper in Agadez, said that dozens of pick-up trucks mounted with machine guns arrived in Agadez late on Monday.

An unnamed Nigerien military source confirmed the convoy’s arrival. "I saw an exceptionally large and rare convoy of several dozen vehicles enter Agadez from Arlit... and go towards Niamey," said the source who added that there were “persistent rumours” that Gaddafi was aboard.

Other reports said the convoy was much larger, perhaps consisting of as many as 250 vehicles.

A Tuareg nomad commander, whose rebellion against the government of Niger in the 1990s was backed by Gaddafi, reportedly led the convoy which was also escorted by the Nigerien army. The trans-Sahara route from Agadez, through Arlit to Libya has long been used by Tuareg nomads as well as migrants from West Africa seeking a new life in Europe.

On Sunday Gaddafi’s internal security chief, Mansour Daw, crossed into Niger, according to the Nigerien military.

Despite the rumours of Gaddafi’s flight his spokesman Moussa Ibrahim insisted that the former leader was still in Libya and planning to fight back.