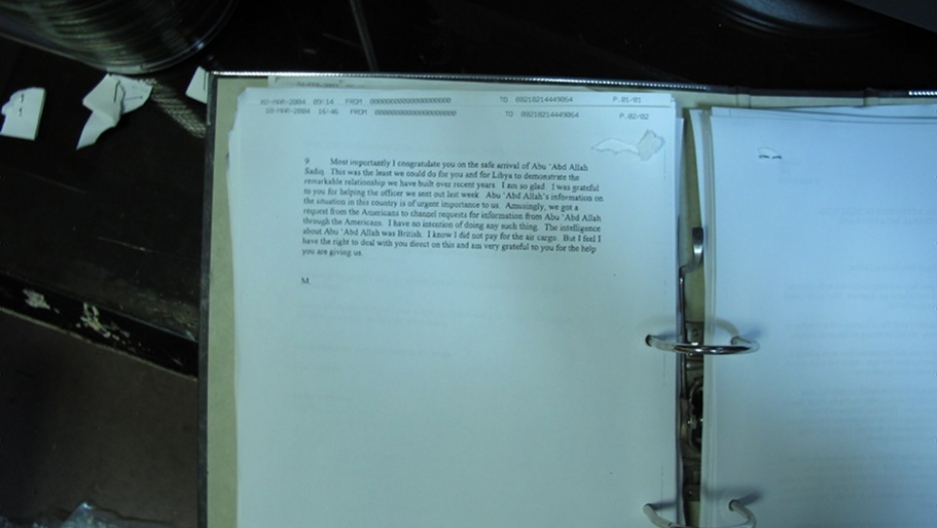 Documents discovered recently at the headquarters of Koussa’s Foreign Intelligence Office in Tripoli reveal how a Libyan Islamist, Abdul Hakim Bil Hajj, was sent back (rendered)  to Libya by the CIA in 2004.

A related document, a letter penned from the British MI6 deputy chief to Koussa’s office, claims credit for finding Bil Haj, as if to make sure that the CIA didn’t interfere in the British agency's ongoing relationship with the Libyan regime.

“We got a tip off from an intelligence friend about certain documents at a certain building,” Human Rights Watch emergency director Peter Bouckaert told GlobalPost, describing  how they found the treasure trove of secret data.

“It’s pretty rare to find the correspondence between the deputy head of clandestine service and ‘Dear Moussa Koussa’” Bouckaert added.

The letter from MI6 to Koussa’s office describes the rendition of Bil Haj, and the behind doors competition for access to Libyan intelligence. “Amusingly we got a request from the Americans to channel request for information from Abu Abdulla (Bil Haj) through them,” writes the British intelligence deputy, identified as Mark. “I have no intention of doing any such thing. The intelligence about Abu Abdulla was British. I know I did not pay for the air cargo, but I feel I have the right to deal with you directly on this.”

Other important revelations from the intelligence cache, according to Bouckaert, include records of Libyan intelligence wire taps of all the Tripoli embassies and hotels; Moussa Koussa’s rolodex of foreign intelligence agents who visited him; and the suggestion that the CIA had access to Libyans rendered back to Tripoli.

A more recent document from the six-month conflict is a letter from Libyan intelligence asking the Somali Salvation Front, a Somali rebel group, for 10,000 fighters as “a favor” to help defend the Gaddafi government.

Boukaert said the documents amount to the “collective memory of a police state, a memory that ordinary Libyans never had access to.”