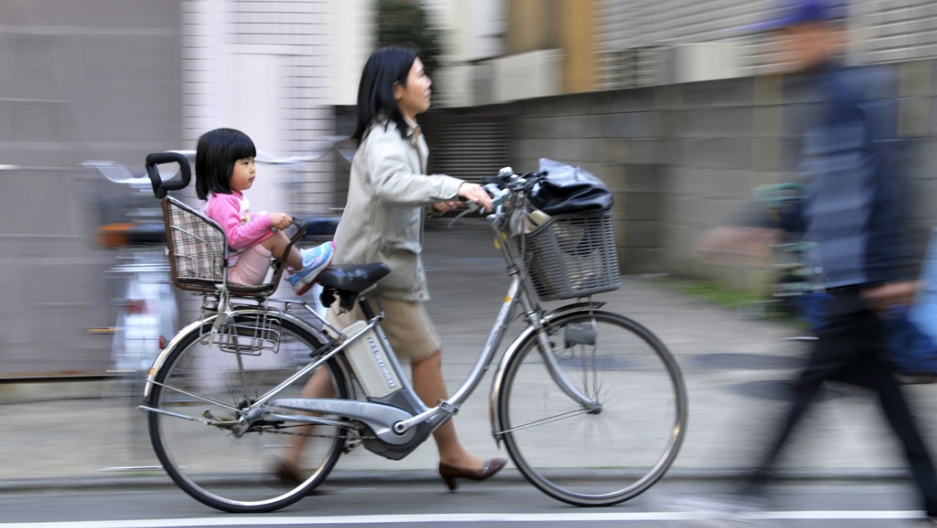 A mother pushes her bicycle carrying her daughter in Tokyo on March 19, 2010.
Credit: Yoshikazu Tsuno
Share

TOKYO, Japan — Given the modern-day ubiquity of divorce, there was nothing remarkable about the decision by Shahidul Huq and his wife to go their separate ways after three years of marriage.

Neither were they alone in having to consider the welfare of their young daughter who, under most circumstances, would be expected to stay in touch with both parents.

But as the ex-husband of a Japanese woman with whom relations irrevocably broke down, the 41-year-old Bangladeshi has been unable to see his daughter for several years.

He is one of thousands of "left-behind" foreign parents who lost access to their children after divorcing or separating from their Japanese spouses.

The plight of foreign parents denied access to their children is complicated by Japan's longstanding refusal to join the Hague Convention on International Child Abduction.

The 1980 treaty, which has 85 signatories, stipulates children aged up to 15 from broken international marriages should live in their country of habitual residence.

In Japan, courts almost always award custody to one parent — typically the mother — and agreements to retain joint custody are informal and invariably breached.

In cases in which the couple lives abroad, the Japanese parent simply returns home with the children in tow.

As a divorcee, Huq has lost his spousal visa status and faces deportation pending an appeal to the Japanese immigration authorities.

"I have asked the authorities many times for permission to see my daughter, but they have not let me," he said. "I am very worried about what will happen to my daughter. She has the right to see her father. What kind of country tells you that you must either go home or go to jail?"

Now, after pressure from the United States, Britain and several other countries, Japan has indicated it is prepared to sign the treaty and, eventually, ratify it.

Some parents have resorted to extraordinary measures to gain access to their children. In September 2009, Christopher Savoie was arrested after snatching his son and daughter as they walked to school and attempting to take them to the U.S. consulate general in Fukuoka in southwestern Japan.

More from GlobalPost in Japan: Can the Japanese economy recover after three disasters?

Japan, the only G7 country that hasn't ratified the treaty, must still overcome opposition from domestic politicians, lawyers and parents' groups who say the treaty will threaten the ability of a Japanese mother to protect herself or her children from an abusive foreign partner.

Ratifying the convention will also require a fundamental overhaul of Japanese civil law, which does not recognize joint custody or visitation rights for the non-custodial parent, even in cases involving Japanese couples.

Foreign governments have warned Tokyo not to allow loopholes to creep in to legislation that would effectively render the Hague Convention useless in cases involving Japanese nationals.

The early signs are not encouraging. The treaty already protects children or parents who risk physical and psychological abuse from a foreign ex-partner, but Japan has said it may block a child's return overseas if the mother cannot accompany him due to financial or other reasons, including the prospect of legal action.

The United States has urged Japan to honor the spirit, as well as observe the letter, of the treaty.

"We will not rest until we see the kinds of changes that are necessary, and we will certainly not abide by loopholes or other steps that will, frankly, somehow negate or water down [the Hague Convention]," Kurt Campbell, U.S. assistant secretary of state for East Asian and Pacific affairs, told a Congressional committee.

More from GlobalPost in Japan: Worries about radiation and children's health

"We are prepared to use all necessary political and legal means to facilitate contact and access for parents and abducted children."

The U.S. State Department is dealing with 123 unresolved cases involving 173 children taken to Japan from its shores. There are about 40 cases involving British parents, as well as 38 in Canada and 32 in France, according to Japanese government data. These are only cases that have been reported to the foreign ministry; the actual number is thought to be much higher.

Many other cases involve parents from Asian and African countries, whose battle to see their children is complicated by their visa status.

Zidi Mourad, a 36-year-old Tunisian, hasn't seen his two children since separating from his wife in February last year. Like Huq, he may lose his right to remain in Japan once his spousal visa expires in April 2012.

"Its hard to talk about our children to other people," he said. "They can play with their children, talk to them and take care of them. But we can't do any of those things, because Japanese law is not clear about the right of a father to see his kids."

Mourad said cross-border child abductions, and the authorities' refusal to help the victims, had exposed a darker side of Japan, his home for nine years: "I like Japan, but on this subject I can't say anything good about it. There is no justice. They have taken away my son's right to be with his father."

The rise in the number of parental child abductions has been fuelled by a dramatic increase in marriages between Japanese and foreign nationals. According to the health and welfare ministry, there were 44,701 such marriages in 2006, compared with 7,261 in 1980, the vast majority between Japanese and Chinese, Koreans and Filipinos. An estimated 20,000 children are born to Japanese-foreign couples every year.

The number of divorces among international couples has also increased, reaching about 20,000 in 2009.

With Japan's decision to sign the convention, left-behind parents have been offered a glimmer of hope that, one day, they will have the legal right to be part of the lives of children who, in some cases, they have not seen for years.

But they face a long wait before Japan makes the necessary legal changes and ratifies the treaty. And there is no guarantee that the authorities will apply the law retroactively, meaning men such as Huq and Mourad face yet more anguish.

"My treatment has been unfair," said Huq. "My ex-wife won't let me see my daughter — she did for a while but not after I had the problem with immigration. I really miss my daughter.

"All I am asking for is fair treatment by the Japanese government. I have not done anything wrong, never committed a crime, and I pay my taxes. All I want is for the authorities to look into my case and do the right thing."