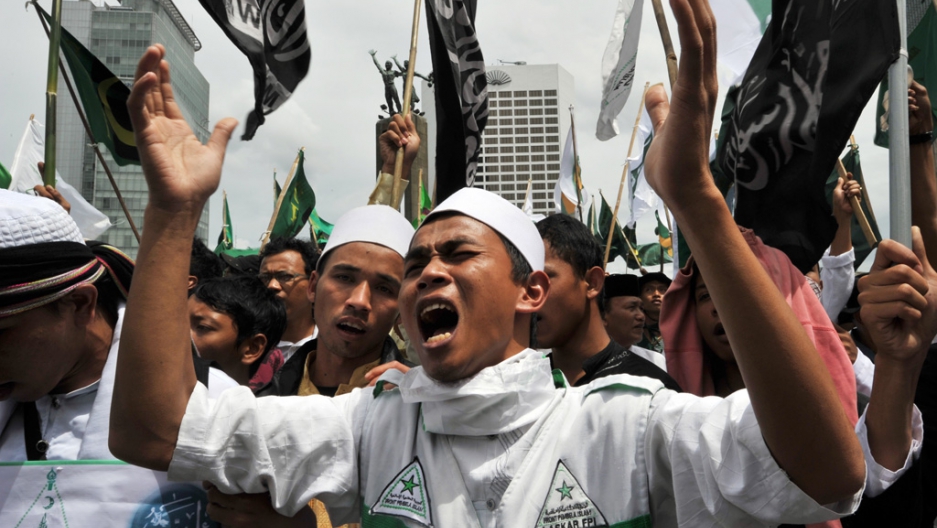 JAKARTA, Indonesia — Ultraviolent Islamic hardline groups with elite political and military backing, a surge in bloody sectarian attacks and a judiciary that is either unable or unwilling to prosecute them.

For years, academics and rights activists in the world’s most populous Muslim nation have claimed that the military used violent Islamic groups as proxies to prop up its economic and political interests.

And for years still, those claims were brushed aside by the Army as one conspiracy theory among many in one of Asia’s most complex political landscapes.

Now, for the first time, a former high-ranking officer has directly implicated himself in the establishment of a violent Islamic group.

Kivlan Zen, a former chief of staff of the Indonesian Armed Forces, told GlobalPost that elements within the military, police and intelligence services have used radical Islamic groups as proxies to “combat Western-leaning, pro-reform forces” for decades.

And the former head of the Army’s strategic reserve, or Kostrad, should know.

He set one up himself.

“After [former strongman] Suharto stepped down in 1998, I was given the order to establish a paramilitary unit to fight students who were calling for elections and the removal of the military out of politics,” Zen said.

“I recruited about 30,000 people from mosques and fringe Islamic groups. The Army provided me with communications equipment for field operations, and I was promised funding from a state logistics body.”

Zen, whose Pamswarkasa group was accused of beheading students during the clashes and is now disbanded, said that the higher-ups who gave the order refused to pay up once it became clear that the student-led reform movement showed scant signs of abating.

Indonesia has been winning plaudits for fast becoming the pick of the southeast Asian investment litter, but it has just as quickly become the region's poster child for religious intolerance. The European Union, members of U.S. Congress and the United Nations have all recently censured Jakarta for its lack of protection of religious minorities.

GlobalPost in Jakarta: Religious tolerance suffers another defeat in Indonesia

Much of that backlash stems from the treatment of the Ahmadiyah, a Muslim minority sect that has been discriminated against by both local and central governments.

A recent decision by a Javanese district court to hand down a three-month prison sentence to a man found guilty for his involvement in the brutal clubbing to death of three Ahmadiyah was the latest example of hardliners getting away with murder — literally.

“The prosecutors’ argument was just crazy. It indicates that the government thinks going after these guys hurts them at the ballot box,” said Bonar Tigor Naipospos, a senior researcher at the Setara Institute for Democracy and Peace.

According to Setara, there were 70 religiously motivated attacks in 2010, up from about 40 the year before. But what’s more disconcerting for rights activists is that only about 4 percent ended up in one of Indonesia’s notoriously corrupt courtrooms.

And when a guilty verdict was handed down, it was rarely for anything longer than 12 months.

But while those complaints centered on the perceived lack of will of President Susilo Bambang Yudyohono's administration in tackling the problem, many Indonesian watchers see a darker hand behind the scenes.

"Hardliners have been used by the military for a very long time. For the elites, who set them up and back them, they have a vehicle to intimidate more progressive political and social elements of society," said Ian Wilson, a lecturer at Murdoch University's Asian Research Center.

"They can do this at arm's length," he said. "With the recent violence against Ahmadiyah, that vehicle narrowed, but it can be broader as well. It's a very reactionary type of politics."

Wilson, who is an expert on groups such as the increasingly violent and politically emboldened Islamic Defenders Front, or FPI, said that military involvement with hardliners began when Suharto used them to help massacre hundreds of thousands of alleged Communists shortly after he wrestled power from Indonesian founding father Sukarno.

Since then, they have been blamed for working for the police to extort illegal businesses, and for the military to destabilize regions such as East Timor, Aceh, Papua and Ambon.

The outcome, observers say, is for the armed forces to exploit conflicts in order to justify military buildups in areas where they can control both legal and illegal businesses.

"The FPI has been around since the last days of the Suharto regime. But they still enjoy backing from the police, and the government," said Wilson. “The current national police chief, who was hand-picked by [Yudyohono], helped to set them up and attends their anniversaries."

Despite a legacy of massive human-rights abuses throughout the archipelago, the military has managed to strengthen ties with the United States and Australia, and is regarded by both as a key cog in their counterterrorism efforts.

But its critics claim that much of the praise it has won for reforms is unfounded, and far from stepping aside from politics after Refomasi and the fall of Suharto, it “simply reshuffled the deck.”

"It's still a political army. You can't get around that. But now they use democratic systems to benefit themselves," said Leonard Sebastian, an expert on Indonesia's military at Singapore-based Nanyang Technological University.

"They are still used for the most horrible atrocities, because they are amorphous and responsibility can be denied. Every military unit or general has a goon squad to call upon."

Sebastian says the problem is compounded by a mainstream political shift to the right, leaving politicians and the judiciary loath to be viewed as un-Islamic by pursuing and prosecuting violent radicals.

"Indonesia is not as pluralistic as people think. There is absolutely no incentive to rein these groups in because they are needed for political mobilization," Sebastian said. "People worry about [U.S.-listed terrorist group] Jeemah Islamiyah, but it's the FPI’s that have the ear of the powerful."

Repeated attempts to seek comment from Indonesia Police, Army and FPI were unsuccessful.