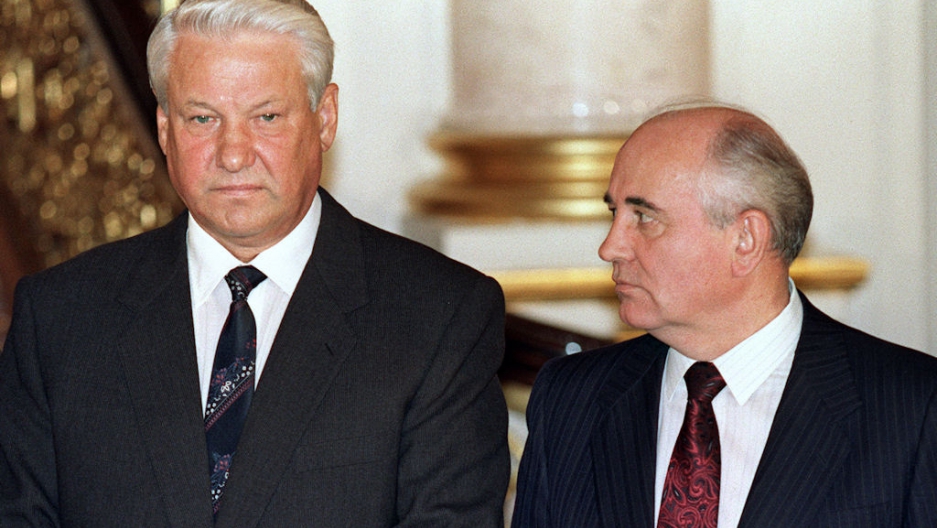 This is the first of three excerpts from Conor O'Clery's new book, "Moscow, December 25, 1991: The last day of the Soviet Union." The second part explains how Mikhail Gorbachev destroyed his rival upstart, Boris Yeltsin. The third part explains how Yeltsin began the climb to leadership of Russia, from where he was able to bring down Gorbachev.

During his six years and nine months as leader of the Soviet Union, Mikhail Gorbachev is accompanied everywhere by two plainclothes colonels with expressionless faces and trim haircuts. They are so unobtrusive that they often go unnoticed by the president’s visitors and even by his aides. These silent military men sit in the anteroom as he works in his office. They ride in a Volga sedan behind his Zil limousine as he is driven to and from the Kremlin. They occupy two seats at the back of the aircraft when he travels out of Moscow, and they sleep overnight at his dacha or city apartment, wherever he happens to be.

The inscrutable colonels are the guardians of a chunky black Samsonite briefcase with a gold lock weighing 3.3 pounds that always has to be within reach of the president. This is the chemodanchik, or “little suitcase.” Everyone, even Gorbachev, refers to it as the “nuclear button.” Rather it is a portable device that connects the president to Strategic Rocket Forces at an underground command center on the outskirts of Moscow. It contains the communications necessary to permit the firing of the Soviet Union’s long-range nuclear weapons, many of them pointed at targets in the United States. The job of the colonels — three are assigned to guard the case, but one is always off duty — is to help the president, if ever the occasion should arise, to put the strategic forces on alert and authorize a strike.

There are three nuclear suitcases in total. One is with Mikhail Gorbachev, another is with the minister for defense, and a third is assigned to the chief of the general staff. Any one of the devices is sufficient to authorize the launch of a missile, but only the president can lawfully order a nuclear strike. So long as Gorbachev possesses the chemodanchik, he is legally the commander of the country’s strategic forces, and the Soviet Union remains a nuclear superpower.

This all changes on December 25, 1991. At 7:00 p.m., as the world watches on television, Mikhail Gorbachev announces that he is resigning. The communist monolith known as the Union of Soviet Socialist Republics is breaking up into separate states. He has no further role. Immediately afterwards, Boris Yeltsin, the president of newly independent Russia, is scheduled to come to his Kremlin office to take formal possession of the suitcase, whereupon the two colonels will say their good-byes to Gorbachev and leave with Yeltsin. This will be the final moment in the disintegration of the superpower that has been ruled by Gorbachev since 1985 and that dominates a land mass stretching over eleven time zones and half the globe. Thereafter Russia, the largest of the fifteen republics, will be the sole nuclear power. Boris Yeltsin will acquire the legal capacity to destroy the United States several times over. It is an awesome responsibility. The Soviet arsenal consists of 27,000 nuclear weapons, of which 11,000 are on missiles capable of reaching the United States.2 One of these warheads alone can destroy a city.

The handover is to be the final act in a drama of Shakespearean intensity. Its major players are two contrasting figures whose baleful interaction has changed the globe’s balance of power. It is the culmination of a struggle for supremacy between Mikhail Gorbachev, the urbane, sophisticated communist idolized by the capitalist world, and Boris Yeltsin, the impetuous, hard-drinking democrat perceived as a wrecker in Western capitals.

The ousted president and his usurper behave in a statesman-like manner before the cameras. Yet rarely in world history has an event of such magnitude been determined by the passionate dislike of two men for each other. Some years earlier, when at the pinnacle of his power, Gorbachev humiliated Yeltsin publicly. The burly Siberian has never forgotten, and in December 1991 the roles are reversed. Gorbachev is the one who is denigrated, reduced to tears as he and his wife Raisa are hustled out of their presidential residence. Even the carefully choreographed arrangements for the transfer of the nuclear communications and codes are thrown into disarray at the last minute through Yeltsin’s petulance and Gorbachev’s pride.

Nevertheless the malevolence of Yeltsin and the vanity of Gorbachev do not stand in the way of something akin to a political miracle taking place. On December 25, 1991, a historical event on a par with the fall of the Austro- Hungarian Empire in 1918 or the collapse of the Ottoman Empire in 1923 occurs without a foreign war or bloody revolution as catalyst. Communist Yugoslavia disintegrated in flames, but the Soviet Union breaks up almost impassively as the world looks on in disbelief. The mighty Soviet army relinquishes an empire of subject republics without firing a shot. It all happens very quickly. Few politicians or scholars predicted, even as the year 1991 began, the scale and scope of the historic upheaval at year’s end.

A bucketful of filth

Back from the dead