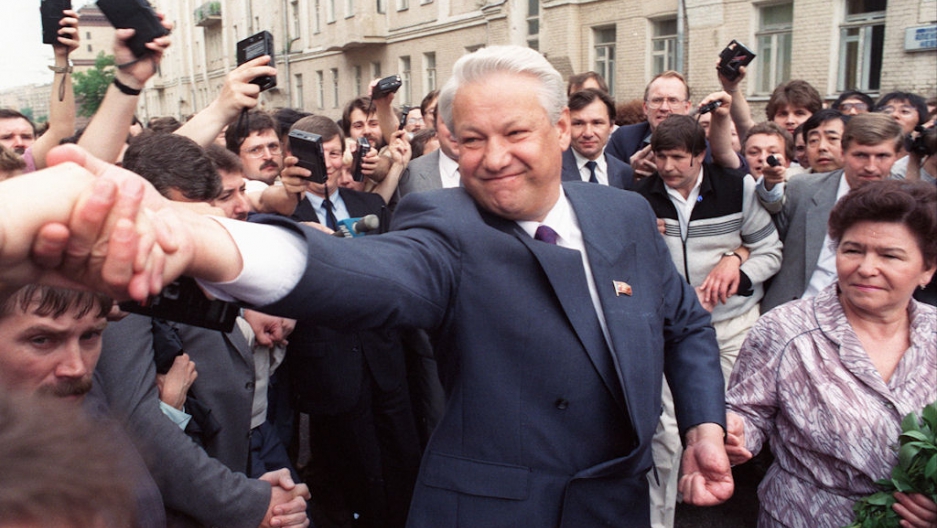 This is the third excerpt from Conor O'Clery's new book, "Moscow, December 25, 1991: The last day of the Soviet Union." The first part introduces the enormity of what two leaders accomplished that day. The second part explains how Mikhail Gorbachev destroyed his rival upstart, Boris Yeltsin.

As the special Communist Party conference of June 1988 was about to end, Gorbachev introduced his most far-reaching domestic reform yet. During his closing speech he produced a piece of paper from his pocket. On it was written a resolution to amend the constitution. This would permit the creation of a new Congress of People’s Deputies of 2,250 members, of whom two-thirds would be directly elected from all across the Soviet Union and a third chosen by party-approved public bodies. It would replace the rubber-stamp Soviet parliament, which met only eight days a year without ever hearing a dissenting voice. It was a giant leap towards democracy.

Already looking at their watches and preparing to leave for the railway stations and airports, many loyal delegates raised their cards to vote for this sensational resolution without realizing what they were doing.

This was the high point of Gorbachev’s reforms, achieved by sleight of hand. He had got support from the ruling Communist Party for the first multiple candidate elections in seven decades of Soviet rule. His scheme was a masterly combination of democracy and management. The party would automatically have a hundred seats. This meant that Gorbachev and his Politburo comrades could safely include themselves in the “red hundred” to avoid any risk of being rejected by the people. Gorbachev dared not seek popular support in an electoral district. Yeltsin’s celebrity was growing, and he might oppose Gorbachev and win.

As the election laws were being drawn up, Gorbachev moved faster to push Soviet society to break with the past. Glasnost flowered as never before. The ban on the sale of foreign newspapers was lifted. Human rights campaigner Andrey Sakharov was permitted to travel abroad. Newspaper editors published scathing accounts of mismanagement and shortages. In November Gorbachev declared that “only the democratization of our entire life can guarantee to overcome stagnation.” It was springtime for glasnost. “There is no alternative to Gorbachev,” enthused Vitaly Korotich, editor of the avant-garde magazine Ogonyok (Little Flame), which had become so popular it was sold out every week within hours of going on sale. “The bureaucrats who oppose him are the usual ‘fat cats,’ people with no idealism, people who believe in nothing.”

Gorbachev’s stock rose internationally. In February 1989 the last Soviet troops left Afghanistan. U.S.-Soviet talks on nuclear disarmament gathered pace. He created the conditions for the freedom of East European countries that had been in thrall to Moscow since World War II. He made it clear that the doctrinaire communist regimes there could no longer count on Soviet tanks to prop them up. At a Foreign Ministry briefing Gerasimov called this the Frank Sinatra doctrine—they could do it their way. It led to a series of counterrevolutions throughout 1989, in which one communist regime after another in Eastern Europe was ousted. They began in Poland and spread to Hungary, East Germany, Bulgaria, Czechoslovakia, and Romania. The Berlin Wall fell in November, leading to German reunification a year later.

Aware that if Yeltsin won a contested seat in the new Congress of People’s Deputies, he would have a popular mandate, the Soviet leader set a trap for his most strident critic. He fixed the rules so that government ministers could only stand for election if they resigned their posts. If his tormentor did run, and if he were defeated, he would be out of a job.

Yeltsin did decide to run when the election was called for March 26, 1989. He put his name forward as a candidate in Moscow’s District Number 1, a constituency encompassing the whole city. The Politburo agreed to the novel proposal of holding a “selection meeting” at which 1,000 party members would choose two out of three prospective candidates to represent the capital. Of the party members given permission to take part, 800 were, by Yeltsin’s reckoning, carefully chosen as obedient, brainwashed card-carriers, who had been instructed to favor Yury Brakov, general manager of the Zil plant. After a meeting that went on until 3 a.m., Yeltsin was nominated with more than 50 percent support, and Brakov came second. The card carriers were not so obedient after all.

His vigor restored, Yeltsin raced around Moscow to crowded election rallies, capitalizing on his underdog status to whip up support. He advocated ending party privileges and allowing people to decide issues by referendum. The party inadvertently added to his mystique by instructing editors to ignore his campaign. A more effective telegraph agency was at work on his behalf: the rumor circuit, which for decades had been the conduit for hard news in the Soviet capital. When a worried Gorbachev approved a Politburo commission to censure Yeltsin for antiparty activities, tens of thousands of outraged voters poured into the streets for the biggest unsanctioned public gathering in Moscow since the Revolution, and the idea was quickly dropped.

Having set democracy and glasnost in motion, Gorbachev had to agree to allow a debate on state television between Yeltsin and Brakov, representing the progressive and conservative wings of the Communist Party respectively. The evening it was shown, millions tuned in to watch. But not everything was above board. The “ordinary citizens” who allegedly telephoned the studio and whose questions were passed on to the candidates were set up. The man who supposedly posed the most hostile question to Yeltsin told reporters next day that he was unaware his name had been used. “Tell Yeltsin not to worry,” he said. “I’m going to vote for him anyway.”

On election day, Candidate Boris Nikolayevich Yeltsin, riding a wave of popular affection, got six million votes, almost nine out of every ten votes cast. Of the newly elected deputies to the Congress, 85 percent were members of the party, but it was not much of a party victory. A sizeable minority were disillusioned party radicals like Yeltsin who could not be relied on to vote in divisions according to the instructions of the Central Committee as in the past. Gorbachev acknowledged that “the election has shown for whom the bell tolls.” But ungraciously, he did not congratulate Yeltsin for three days, and his rival’s triumph was barely mentioned in Pravda.

Yeltsin had to admit that he had Gorbachev to thank for his political resurrection. Stalin shot awkward comrades; Khrushchev pensioned them off; Brezhnev sent them as ambassadors to distant countries. “Gorbachev’s perestroika set a new precedent,” he conceded later. “A dismissed politician was given the chance to return to political life. New times were on the way, unpredictable and unfamiliar, in which I had to find a place for myself.”

A bucketful of filth