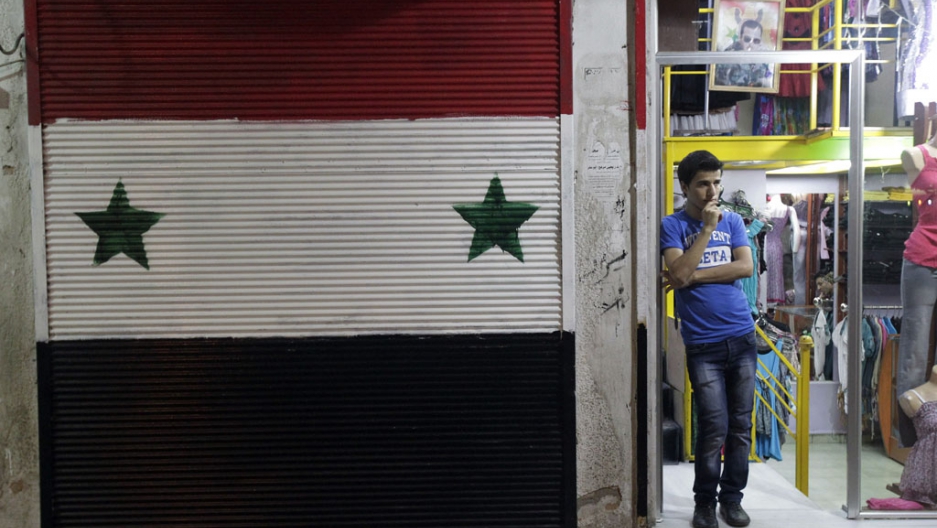 A Syrian vendor stands at the entrance of his shop in the commercial district of the flashpoint city of Homs, northeast of Damascus, on Aug. 29, 2011.
Credit: Joseph Eid
Share

BRUSSELS, Belgium — With the Libyan conflict winding down, perhaps Syrian opposition activists can have some hope, along with what must be a good deal of envy over the resources invested to bring down Muammar Gaddafi.

World leaders met in Paris this week to talk about a post-Gaddafi Libya, but they also used the platform to take shots at Syrian President Bashar al-Assad, whose nearly six-month crackdown on anti-government protesters is estimated to have killed some 2,200 people so far, with the number mounting daily.

"[W]hat’s happening in Syria is appalling,” he said after the meeting. "I think the world needs to stand up and speak clearly about this.”

Cameron called out the United Nations Security Council for its failure to agree on a strong stance against the regime. “We need tougher sanctions, more travel bans, more asset freezes, a clear message that the regime and what it is doing is unacceptable.”

Indeed, today, European Union governments agreed on new sanctions for Syria, targeting the oil industry, in an effort to intensify pressure on Assad.

GlobalPost in Beirut: Can the Syrian opposition win?

On Saturday morning the hard-fought oil embargo against Damascus will go into effect, and names will be added to the list of people and companies who are banned from EU travel and have any EU bank accounts frozen. Though it doesn’t carry the same weight as would sanctions by the more than 190 U.N. members, the EU buys 95 percent of Syria’s oil exports, so it’s hoped to hit Assad in the coffer.

But it’s another matter whether this is, as the British premier demands, a “clear message” the world won’t accept Assad’s actions.

The boycott takes effect Saturday, but existing contracts can be maintained until Nov. 15. Italy asked for the extension to find a way to replace its Syrian supply. A push by some nations to also include a ban on investment in Syria, already implemented by the United States, fell by the wayside in this round of negotiations.

The delay in the absolute cut-off date outrages Dutch politician Alex Pechtold, who heads up the socio-liberal party “Democrats 66” and chairs the party group in the Dutch House of Representatives. Pechtold met this week with Dick Benschop, head of the Dutch arm of Shell Oil, a major European investor in the Syrian oil sector, urging the company to voluntarily stop importing from Syria with or without an EU ban.

Shell declined, saying it would obey an EU boycott but would not lead an industry one.

Now that the ban is a reality after months of negotiation, Pechtold says he sees “no reason why this can’t be done within two weeks. It’s not like we started studying it yesterday!” He believes the death toll between now and Nov. 15, undeterred by the government’s lack of funds, could be “enormous.”

David Schenker, director of the Program on Arab Politics at The Washington Institute on Near East Policy, agrees there’s no question Assad will use the time between now and Nov. 15 to gather more resources to use against his detractors. Schenker is particularly critical of the failure to agree on an investment ban, calling it “unfortunate — indeed unconscionable … to seemingly put profit over principle.”

More from GlobalPost: Amid crackdown, Syrian protesters get creative

An investment ban would have been an unmistakable message to Assad, Schenker advised, that “even if he temporarily succeeds in suppressing the democratic aspirations of the Syrian people, the regime will not be provided with an economic life raft from the West.”

An EU diplomat familiar with the talks defended the compromise, saying Italy’s situation had to be taken into account.

“We are trying to put pressure on the Syrian regime, not punish our own members,” said the diplomat, who spoke on condition of anonymity. In addition, the official explained that more discussion was needed over a potential investment ban, so EU officials decided to move quickly on what could be done now.

But Pechtold says he’s not satisfied with either the measures or the message.

He says since Assad knows that NATO has no intention of getting involved in Syria, the sanctions have to be tougher, tighter and faster. Freezing bank accounts is useless, Pechtold believes.

“This stops maybe some daughters of generals from shopping in Paris but that’s all!” he said, complaining that sanctions up until now “don’t hit the regime where you can hit it hard, and that is in their budget.” He wants a “coalition of the willing” — companies owned by Canadians, Americans, British, Croatian, Italian, French, he said, everyone invested in Syria — to make a deal to all squeeze the regime further financially.

And if they don’t, perhaps businesses themselves will feel a squeeze. Pechtold says he’s not threatening a drive for consumer reaction yet, but he puts it this way: “Every Syrian man and woman every morning has to decide what they are doing, and every consumer in Europe and the United States has to do the same,” he explained.

“I as a consumer am looking at companies like that and when there’s a new regime in Syria, they will also look to the companies who were supporting them by not being there.”