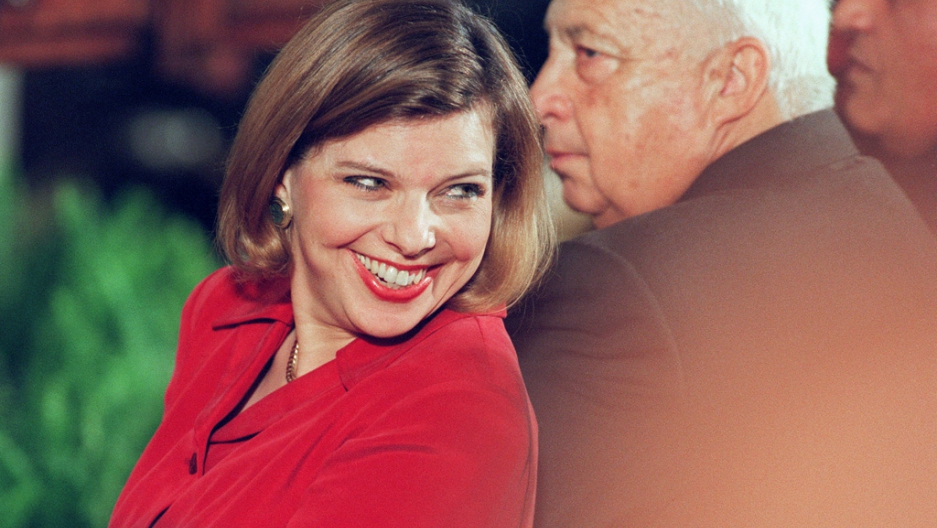 Sarah Netanyahu, wife of Israeli Prime Minister Benjamin Netanyahu, smiles during a signing ceremony for the Mideast peace agreement on Oct. 23, 1998, in the East Room of the White House in Washington, D.C.
Credit: William Philpott
Share

JERUSALEM — Sefi Ovadia, Israel Army Radio’s Knesset correspondent, worked mightily to suppress his amusement on this morning’s news broadcast, eventually succumbing to a smile so wide it could be heard over the airwaves.

The subject of his mirth was “Sara-Tara,” the latest scandal involving Sara, the volatile and unpredictable wife of Prime Minister Benjamin Netanyahu, who is again involved in an unfortunate incident with domestic help.

This time, the subject of her wrath is Tara Kumari, a Nepalese citizen who yesterday found herself with a broken finger and without a job.

Sara Netanyahu, 53, has a propensity for disputes with household staff. This is the third time in three years a menial worker has left her home amid accusations of mistreatment or underpayment.

“Sara-Tara” arrives with almost theatrically bad timing for the prime minister, who is striving not to appear as a member of the economic elite as Israel gears up its “March of a Million” social protesters this coming Saturday.

But the particular detail that tipped Ovadia into unbidden giggles was the extraordinary sequence of some eight consecutive press releases issued yesterday by the office of the prime minister, referred to as “a tempest of press releases” by some media outlets, as his staff toiled to contain this new scandal.

Then, following a stern warning by the attorney general that prime ministerial personnel could not be enjoined to run a public relations campaign on behalf of the first lady, at almost the same moment Kumari was fired, a privately paid spokesman for Sara Netanyahu was hired.

Kumari has worked for two years overseeing the daily welfare of Sara Netanyahu’s 96-year-old father, Shmuel Ben-Artzi, without previous incident. She worked at his private residence for most of that time. In early August, after a brief hospitalization, Ben-Artzi moved in with his daughter, and with him came Kumari.

How she ended up with a broken digit remains in dispute, but the contretemps in the official residence was so loud that the prime minister, who was present in the building and chairing an inner cabinet meeting, reportedly felt obliged to interrupt the business of state several times to go see what was taking place.

Kumari told Army Radio yesterday that life in the prime minister’s official residence was like being “in jail.”

“It is very difficult for me,” she said. “I am not free, and I never go out. Even when I ask for vacation, it is not given to me. Sara says that if I go for a vacation there will be no one to care for her father.”

According to Kumari, the disagreement leading to the fracture occurred after she requested her July paycheck. She said that after she made her request, Mrs. Netanyahu ran toward her, causing her to fall and break her finger.

Ovadia stopped short of saying on the air what the entire country was tittering over, which is that Sara Netanyahu herself, personally and directly, was mismanaging yesterday’s news cycle and issuing the awkward press releases herself — a highly irregular turn of events.

Instead, he reported: “It was total hysteria. All day long, all they did was fan the flames of this story. But it was not actually the spokesman’s staff. We know these people. We work with them all the time.”

The strange notices officially issued by Netanyahu’s spokesmen included the unattributed and unsubstantiated accusations that Kumari was “a failure” at her job, had misappropriated funds “on three occasions” and that she “had a tendency to hit herself.”

Most of all, they left a chaotic impression of life in the prime minister’s residence.

“Kumari has been there two years,” Ovadia went on. “And they release some sort of doctor’s note saying she’s failed at her job for more than half a year and has to go. Now, it doesn’t take seven months to get rid of an employee who is not working out in the prime minister’s office. Less so at his residence. So why was she only fired when all this happened?”

“Okay, so why?” countered Rino Tsror, the morning news host.

Ovadia squirmed. “There is a culture of untruthfulness in the prime minister’s press releases.”

Tzror blew up: “Until not long ago this kind of 'culture of untruthfulness,' as you are calling it, would have caused a resignation!”

Kumari was pictured in newspapers and on TV late in the day standing on a sidewalk outside the prime minister’s Jerusalem residence next to a disorderly pile of suitcases and belongings. She has legal representation, but is now jobless, and may lose the foreign worker’s permit allowing her continuing residence in Israel.

Ofer Leffler, the spokesman hired to handle “Sara-Tara” as it was unfolding, issued a statement late in the day saying that Sara Netanyahu at no time had physical contact with Kumari and that Kumari was upset she was going to be fired.