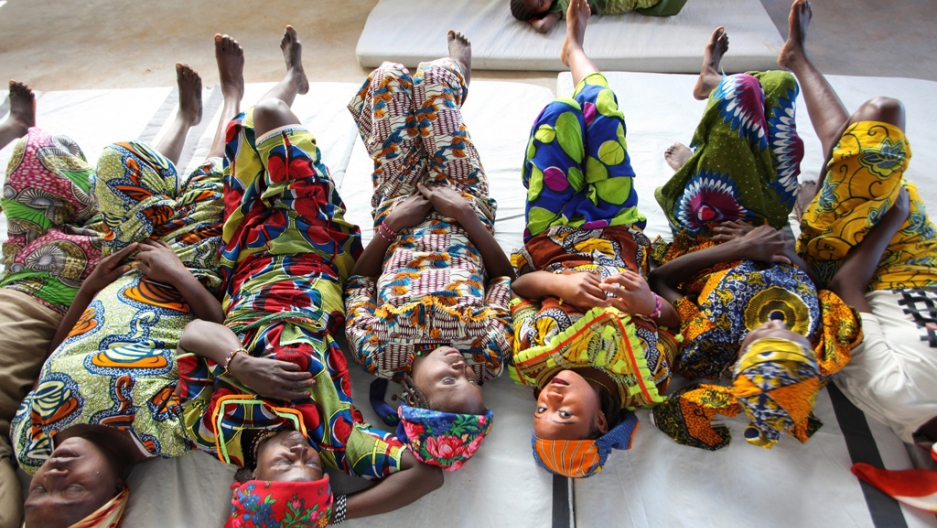 Before and after surgery, patients are taken through daily exercises.
Credit: Penny Bradfield
Share

KIGALI, Rwanda — “Me, personally, I would rather have had AIDS than fistula,” said 31-year-old Beatrix (not her real name as she is afraid of being identified) in a soft voice. Her eyes looked away from me in embarrassment as she related her experience as a fistula victim in her native language of Kinyarwanda.

To her, the stigma associated with fistula, an injury that results in chronic incontinence, is worse than the stigma of having full-blown AIDS.

Obstetric fistula occurs during childbirth, usually when a woman is in labor too long or when the delivery is obstructed in some way. It is most prevalent in places where there is limited access to skilled medical professionals, and maternal health care isn’t accessible. The injury is an abnormal opening in the birth canal, usually between the vagina and the bladder or the vagina and the anus.
“I got pregnant, I arrived at the time to deliver,” said Beatrix, who was pregnant in 2001. She was in labor for for three days before receiving medical assistance.

“They discovered it was a stillbirth. They first tried to assist me without an operation, but I was very tired. They pulled the baby out with instruments and I think the instruments are what spoiled me,” she explained.

Beatrix, who had repair surgery in 2008, made the difficult decision to speak out about fistula and the shame she felt.

“Afterwards they told me that my bladder was now destroyed. I really suffered and where I was lying, I felt bad and cold. I went home and I was lying on the bed. Whoever comes to visit me complains about the smell,” she said as her eyes began to mist and she looked at the floor.

“We reached a time when anyone who comes to visit would talk to my husband and say ‘Do you really think this is a woman you want to have in your home?’ They would tell him to chase me away and look for another, better woman.”

Fistula is life-shattering for the women who have it; the chronic incontinence that it causes can result in social isolation. Women affected are often divorced by their husbands, abandoned or neglected by their families and ostracized by their communities.

Beatrix was 21 years old when she became pregnant and acquired fistula. She spent seven years looking for relief until she was referred to the Fistula Care Project by its coordinator Jean-Nepo Mugenzi, and finally had successful repair surgery.

The Fistula Care Project is five year agreement funded by USAID and managed by EngenderHealth. Its aim is twofold: Improve maternal health care to prevent fistulas from occurring, and give affected women the fistula repair surgery they need.

Traumatic gynecologic fistula, a similar injury to obstetric fistula, is caused by rape or sexual violence. It most often occurs in conflict and post-conflict areas.

“Here in Rwanda, we thought that fistula was a result of the massive rape that occurred during the genocide," said Zhanda Kabagema, the Senior Medical Assistant for the Fistula Care Project. "Now we are learning that it occurs in post-genocide Rwanda.”

While there are few statistics available regarding women who suffer from fistula in Rwanda — due in part to the stigma surrounding it — since May 2006 there have been 933 successful fistula repair surgeries at the three medical facilities that perform them.

“Early repair and treatment of fistula is critical," said Dr. Joseph Ruminjo, senior medical advisor of EngenderHealth. “It prevents a cycle of stigma and discrimination that often leads to dependency, disempowerment and a loss of self-esteem for the woman.”

Women need to seek immediate assistance when the condition occurs and not lock themselves out of society due to fear. However, doctors trained in fistula repair surgery often leave the arena, complaining of their distaste for the surgery.

“I have to thank those doctors who helped me and made me live again!” said Beatrix, finally looking directly into my eyes and smiling. I could see that she had her life back.

Though the Fistula Care Project is a good start, more needs to be done to retain fistula repair surgeons and a public outreach campaign with more counseling is very necessary to begin to combat the crippling stigma and shame that these women feel. In the end, good reproductive care is needed so that these injuries will become less likely to occur during childbirth.