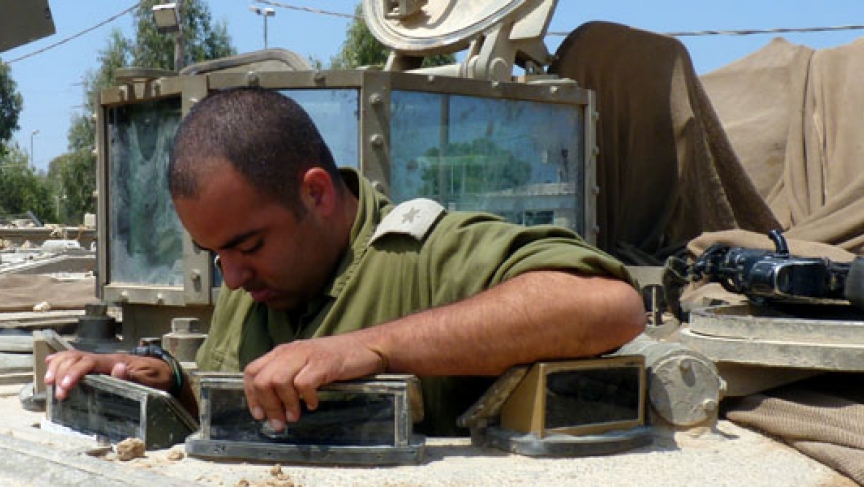 Israeli defense officials say they have intelligence on a plot by Palestinian militants to launch a terrorist attack similar to the one carried out less than two weeks ago near the border with Egypt. Southern Israel is now on high alert.

In recent days, two additional Israeli warships have been deployed to the Red Sea border with Egypt. Two highways that skirt Israel's border with the Egyptian Sinai desert have been closed to all civilian traffic. More security forces have been sent to Israel's southern borders with both Egypt and the Gaza Strip.

For Israeli Army Maj. Matan Malka, the tank-like machine called an Achzarit — the word means "cruel" in Hebrew — is like a second home. As a combat infantry officer, Malka spends a lot of his time in one of these imposing vehicles, driving along the border fence that separates Israel from the Gaza Strip.

"Even in the tank or an armored vehicle," he explained. "You don't [feel] safe." Not safe, Malka said, because of the variety of threats posed by Gaza militants.

"We have an anti-tank missile threat, IED (improvised explosive device) threat, sniper threat, mortar threat, rockets," he said. "I think that for the civilians that live here, this is a state of war."

Israel's border with Gaza is heavily militarized, especially since Hamas took control of the territory in 2007. The Israelis have deployed a new high-tech anti-missile system called Iron Dome that shoots down rockets. They rely on a sophisticated network of drones, remote controled weapons and electronic surveillance devices along the border fence — and inside Gaza.

But Malka said a lot of the day-to-day work of defending southern Israel is still done by soldiers like him.

Malka and his soldiers spend up to 20 hours a day patrolling, he said. "The other four hours we try to rest, to plan the next week or the next day. It's very hard, but we understand we are here. We understand that if we don't do [this], the Israeli people get hurt. And we don't want that to happen."

The case of Gilad Shalit also has to be on the minds of Israeli soldiers. He was kidnapped while patrolling near Gaza in 2006 by militants who tunneled their way into Israel.

At the southern end of Israel's border with Gaza, trucks loaded with goods like building materials, car parts and household appliances line up at the Kerem Shalom crossing terminal. The scene is a reminder of the challenge Israel faces in balancing its security needs with the humanitarian situation in Gaza.

"The Israeli policy," said army captain Amitay Cohen in an interview outside the border terminal, is for "the Palestinians to have a normal life."

Cohen grew up near the Gaza border, in the town of Sderot, which has been hit by huge numbers of rockets and mortars in recent years. Cohen said people there, including members of his own family, believe the Israeli army should take a much harsher line with the Palestinians.

"For them it's hard to understand because they say, 'if we suffer, why you helping them?'" But Cohen said, in his opinion, "we understand that to make sure the civilian life will have a very normal way of life, this is in Israeli interest. Nobody wants a humanitarian crisis in Gaza."

But not everyone believes Israel is striking the right balance. Karl Schembri, is with the aid group Oxfam and based in Gaza City. He said Israel has the right to security. But the buffer zone that the Israeli military maintains inside the border fence is an example of how Israel goes too far.

"We're talking about up to 30 percent of Gaza's agricultural land and this includes some of the best water wells," Schembri said. "Thousands of people have been displaced from there or else they're facing incursions or the threats of gunfire whenever they go to work on their land."

After a spate of Palestinian rocket attacks and Israeli air strikes, the Gaza border has been relatively quiet in recent days. Israeli officials are sending very public warnings though about what will follow another terror attack like the one on August 18th.

Israel's top general yesterday told Palestinian militants that, "it would be best not to test our strength."