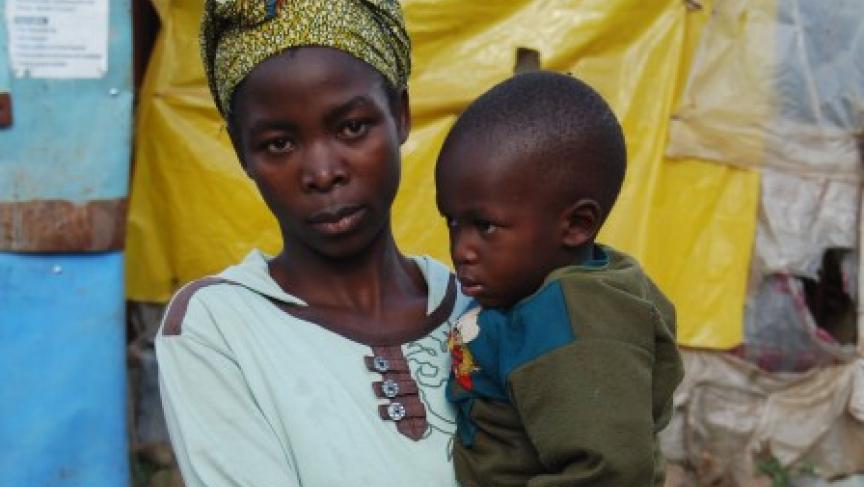 Lilian Akoth standing outside her metal shanty with her son Teddy in her arms. (Photo: Anders Kelto)

Story by Anders Kelto, PRI's The World. Listen to audio above for full report.

Lilian Akoth stands in the doorway of her metal shanty in Kenya’s capital, Nairobi. A number of years ago, she got pregnant.

“I went to the hospital and tested positive for HIV,” she says. “When I got back home and told my husband about it, he was very angry.”

When Lilian said she wanted to have the baby anyway, he beat her. He said she was cursed with HIV, and the baby would also be cursed. He punched her in the stomach many times. She miscarried.

Lilian’s experience was extreme, but the problem she faced is common in Africa. Many HIV-positive women say they have been pressured – even forced – not to have children because people assume they will infect their babies.

Mitch Besser, an American obstetrician now based in South Africa, says many people in Africa are not aware that HIV doesn’t have to pass from mother to child.

Besser has founded an organization called Mothers2mothers that helps women get those interventions – HIV testing, and antiretroviral drugs to prevent the virus from spreading to the child.

Carol Mutune is a counselor with Mothers2mothers. She says there’s another reason HIV-positive women are pressured not to get pregnant. People in their communities fear the mother will die, leave the child an orphan, and “they will be left to take the responsibility of that child.”

Across the continent, there have been organized efforts to prevent HIV-positive women from having children. In Western Kenya, an American organization is paying poor women with HIV to go on long-term birth control. In Namibia, several doctors have been accused of sterilizing HIV-positive women without their consent. And in Uganda, the government is considering a bill that would make it a crime for people to transmit HIV, including mothers who infect their children.

Supporters of these efforts say it is irresponsible for HIV-positive women to get pregnant, when many of them still do not have access to antiretroviral drugs.

But AIDS activists say that instead of pressuring HIV-positive women not to have kids, more should be done to ensure that everyone has access to treatment.