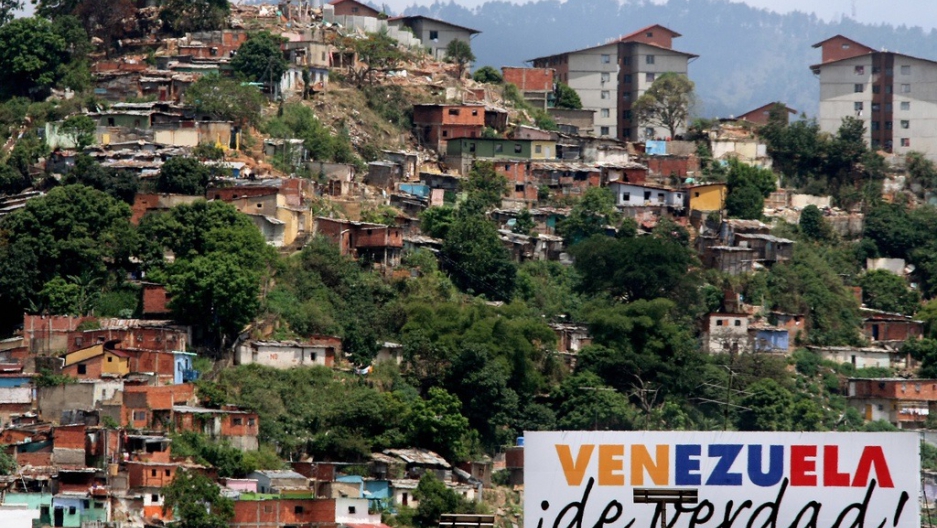 CARACAS, Venezuela — The unfinished 45-story office tower looming over this capital city lacks plumbing, elevators and walls. Yet it’s become a haven for squatters desperate for a place to live.

The invasion of the half-built tower, a project abandoned during a 1990s banking crisis, offers a dramatic snapshot of Venezuela’s housing shortage.

Government officials say there is a nationwide deficit of more than 2 million affordable homes. The shortage is so acute that it’s likely to play a large role in next year’s December presidential election.

President Hugo Chavez has already announced his intention to run for a fourth term, despite his current battle with cancer. His government says it will build 350,000 free or low-cost homes, and offer cheap home loans ahead of the vote.

But critics warn that it is a reelection ploy and they claim that most of those houses Chavez promises will never be built. “If any public policy under Chavez has been deficient, it’s housing,” said Marino Alvarado, who heads Provea, a Venezuelan human rights group.

The government didn’t respond to multiple requests for comment on the housing shortage. In the past, Chavez has blamed the problem on past governments who didn’t espouse his socialist views.

During an oil boom in the 1950s and 1960s, Caracas was viewed as one of Latin America’s most modern cities. Gleaming high rises were built downtown, while government housing projects rose in the slums. But in the 1980s and 1990s, construction failed to keep pace with demand as people migrated to the city from rural areas.

Private companies struggled to build, since many areas lacked water, sewers and telephone lines. High inflation cut down on mortgage lending. Adding to the pressure was the fact that thousands of people lost homes in periodic flooding and landslides.

Under Chavez, who was first elected in 1998, housing construction slowed even further. The public and private sectors have put up just 28,000 homes per year. That’s less than half the number built under previous governments, according to Alvarado.

Affordable housing has never been a top priority for Chavez despite his power-to-the people rhetoric, says political analyst Luis Vicente Leon. That’s largely because building homes yields little political payoff, he said. Homes are expensive, and each one only benefits a single family.

Instead, Chavez has invested billions of Venezuela’s petro-dollars on schools, health clinics and food programs for the poor. These projects improved the lives of millions of Venezuelans and helped Chavez secure two landslide reelection victories.

So, most Venezuelans are left to find their own housing. In fact, seven out of 10 new houses in Venezuela are built by individual families, according to economist Luis Pedro España. This runs up the prices because the people construct them incrementally, buying small amounts of supplies as they raise the cash.

Those who can’t afford to build find shelter where they can. Some 300 buildings in Caracas have been taken over by squatters in recent years, often with the government’s blessing.

At the squatter high rise, the more than 2,500 residents often lug their groceries and school books up 20 flights of steps. Gang members provide security and control access to the building.

More from GlobalPost: How Nicaragua made the most of Hugo Chavez's riches

Five blocks away, hundreds of flood refugees have camped out in the corridors and empty stalls of a bankrupt shopping mall.

Now, Chavez claims that help is on the way. He’s vowed that 2 million homes will be built over the next seven years.

“Of course we will do it, but with great effort,” Chavez said when he announced the plan in April.

Dilumar Rodriguez, who works for the housing mission, said the idea is to make new homes accessible even to people earning minimum wage.

Rodriguez blamed the housing shortage on population growth rather than government neglect. “Some families have 15 children,” she said. “But that’s why we’ve created this program.”

This isn’t the first time that Chavez has promised homes to his people. Five years ago, for example, Chavez pledged to construct 75,000 new houses for Caracas. Less than 3,000 have been built, in part due to bureaucratic hangups and the shortage of construction supplies.

Critics claim the latest program is no different. But many people, desperate for a home of their own, will likely trust Chavez once more.

John Checa, a Caracas tailor, sees the program as his only chance to buy the two-bedroom apartment he’s been renting for the past seven years.

Checa, a 42-year-old father of one, lacks $16,000 for the down payment. But he has registered with the housing mission for a low-cost government loan. It’s put him firmly on Chavez’s side.

“A lot of people are going to benefit from this housing program,” he said. “I just hope I’m one of them.”