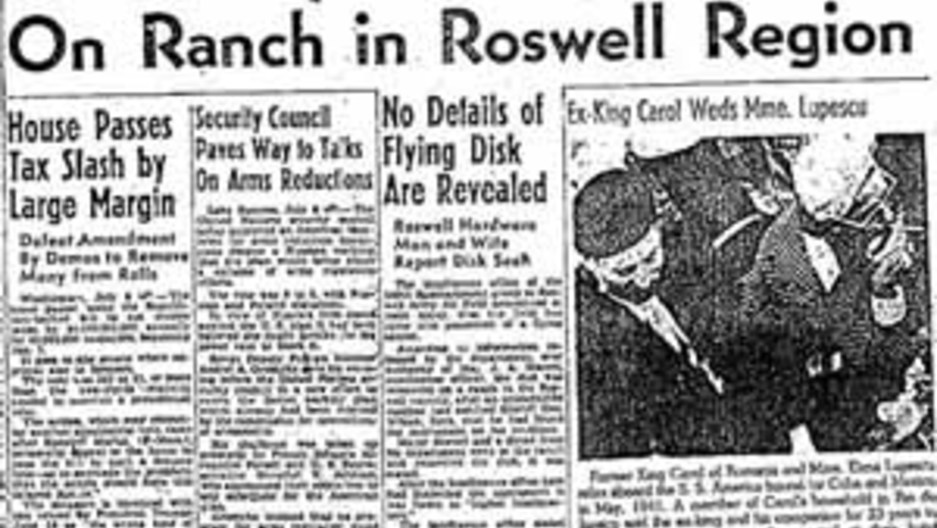 Share
Some Russians believe that Mikhail Khodorkovsky was the victim of a conspiracy — of political foes and compliant news media. That's not so far-fetched. Then again, many Russians tend to believe conspiracy theories that few non-Russians would take seriously. A case in point is the "Roswell Incident." A familiar theory about that is that a flying saucer crash-landed in the desert and the military spirited away the alien pilots. But author Annie Jacobsen puts forth a different theory in her book Area 51. She suggests that the craft was actually a spy plane, sent by Soviet Premier Josef Stalin — and that the creatures inside were created by a Nazi scientist. That's a conspiracy theory many Russians would have no trouble accepting. Jessica Golloher sent us this report from Moscow: "I definitely agree that many things could be not what we actually think they are!" Meet 20-something Muscovite Alina Lobzina. She likes the notion of a Soviet spy plane, complete with miniature people whom Nazi doctor Joseph Mengele engineered to scare the pants of Americans. "That would be so cool and a brilliant topic to explore!" said Lobzina. Now, few Americans would use the word brilliant to describe the idea that a Soviet spy plane sent by Stalin, with mini creatures on board, crashed into the desert but many Russians, including Lobzina, go for conspiracy theories. "It's so cultural. It's like asking why people like hamburgers. People do some strange things because it's like tradition. It feels so Russian and so deep into the culture. It's more just like a part of me says you never know. For some reason Russia superstition is a huge part of the culture," said Lobzina. That reason may have to do with restrictions on expression and open debate in Russia. Nikolai Petrov is with the Carnegie Center, a think-tank in Moscow. "The lack of public politics and public discussions is a good environment for any conspiracy theory to be pretty popular. If something is not discussed in public, there are many possibilities to explain this. That is why conspiracy theories are pretty widespread in Russia," said Petrov. Indeed they are. Here's another example, from last year. Poland's President Lech Kaczynski, his wife, and 94 others were headed to Russia last year to commemorate the 70th anniversary of the Katyn massacre, in which Stalin's secret police killed thousands of polish officers. The Kremlin was set to officially apologize for the massacre but the plane carrying the Polish president crashed, and everyone on board was killed. Many Russians concocted conspiracy theories to explain the crash. The theories gained currency as Russian officials immediately blamed the Poles for the crash and took their own sweet time to share the findings of the investigation with Warsaw. Russian President Dmitry Medvedev addressed the conspiracy theorists during his end-of the year TV interview. Medvedev said Russians should not politicize the situation. He said it's important to hear all points of view and accept the conclusions of Russia's internal investigation of the crash. During that same interview, Medvedev later acknowledged that many Russians are suspicious for a reason because the country's totalitarian traditions are so deep that it will take a long time to get rid of them. Political Analyst Nikolai Petrov says Medvedev's comments are lip service and that the Kremlin is open about only things that don't threaten its image. "There is transparency with regard to those areas and events, which are considered by the Kremlin not to be dangerous for them," said Petrov. Alina Lobzina agrees. She says conspiracy theories will flourish, in Russia, as long as official secrecy is the rule. "You know there are so many things that haven't been evaluated officially. There are so many things that no one knows much about," said Lobzina. As for Stalin's secret spy plane with its mutant aviators, many Russians say sure that sounds about right.