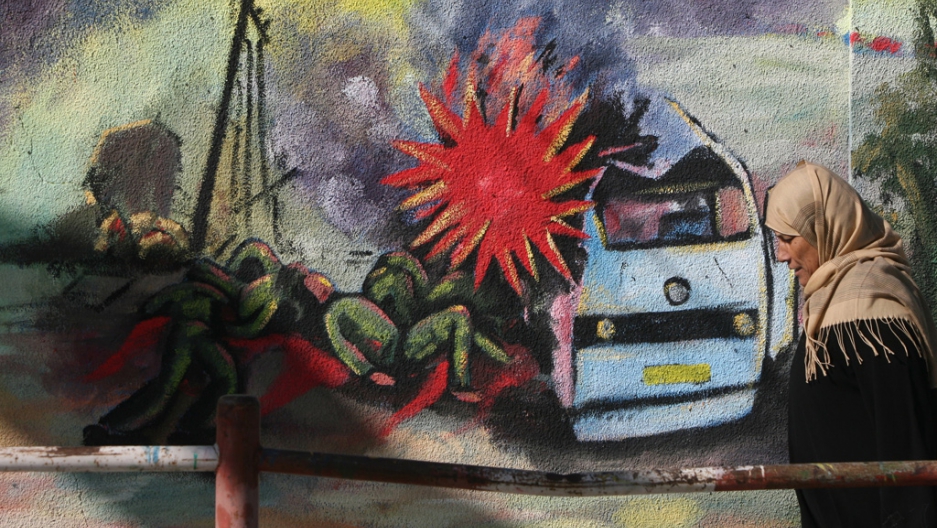 A Palestinian school woman walks past part of a mural painted by a Hamas artist, representing the bombing of a bus in Israel, on December 13, 2009 in the northern Gaza Strip refugee camp of Jabalia.
Credit: MAHMUD HAMS
Share

JERUSALEM — Israelis woke today to a familiar reality, as the possibility of terror gripped the nation.

Highways 10 and 12, scenic desert trails that wind along the Israeli-Egyptian border, were closed to non-military traffic and heightened warnings took over the morning news.

Coming only 10 days after a group of about 15 terrorists succeeded in infiltrating Israel along that very border, killing eight people near the Red Sea resort town of Eilat, the warnings struck at the heart of the nation’s sense of security.

An altercation outside a popular bar in south Tel Aviv that occurred early Monday morning has added further urgency to warnings, and caused many to speculate that more attacks could be on the horizon.

Around 2 a.m. Monday morning, eight people were wounded in south Tel Aviv when a Palestinian from the West Bank city of Nablus stole a taxi at knife point, then drove it to a neighborhood pulsing with bars and nightclubs, where he ran over a policeman. The man then leapt out of the cab and began knifing bystanders.

The altercation, just outside the popular Haoman 17 club, was described by "an act of terror," by Tel Aviv's district police commander.

Down the street at the Hoodna bar, musicians kept on playing and the beer kept on flowing as patrons began to stream in, saying that a terror attack had just taken place.

“It was weird,” said Elad Naim, 33, Hoodna’s owner. “As close as it was, just a two-minute walk, it felt so far away. We didn’t actually feel anything here. The police cars came from the other side. All of a sudden, people came to have a beer and told us what had happened right here. It was definitely stressful.”

Hoodna is a trendy neighborhood bar with a friendly, open vibe. Almost every evening, you can walk in on a performance of live music or a sports broadcast. (Naim is a Celtics fan.) On weekends, Hoodna, which is the Arabic word for “truce,” remains open till 5 or 6 a.m.

More from GlobalPost: Glenn Beck and Herman Cain share the stage in Israel

Naim and his partner also own the nearby coffee shop, Casbah. “Both have Arabic-language names. It expresses our political views and, also, despite the trend towards 'Israeliness' in name places, Arabic is also a national (language) of Israel and we like to fix up that inequality.”

Palestinian President Mahmood Abbas has vowed to request U.N. recognition of a Palestinian state on Sept. 20. There were reports on Tuesday that Jordan has called on Abbas to reconsider his decision to declare statehood.

But many in Israel fear that if he carries through with his pledge, it could augur a new wave of violence when Palestinians find themselves once again with raised expectations but few, if any, changes in day-to-day life.

In eatery-dense Jerusalem's central market, which has suffered numerous terror attacks in the past, Yossi Elad, owner of the popular restaurant Machaneyuda, is not particularly worried.

In Eilat, in the last few days before school starts next week, 9,000 people gathered for a festival of Yemenite culture, arriving by alternate routes. Mayor Meir Yitzhak Halevi said the city was “operating in a normal way,” despite the grim anticipation of renewed terror.

“We are in a period of heightened tensions and probably not yet at the worst of it," he said. "Anyone who looks at what is taking place within the Palestinian Authority, and at the power struggle there between (it) and Hamas, could see this coming.”

“We’re between a rock and hard place,” Fogel added, suggesting that the only possible solution for Israel will be to strike the fear of annihilation in the hearts of the Hamas leadership.

Fogel cited Lebanon as an example, referring to the recent inability of Hezbollah and its leader, Sheikh Hassan Nasrallah, to initiate terror attacks from Israel’s northern border. “Nasrallah doesn’t sleep in the same bed twice. We need to get (to) that point with Hamas, with them thinking of how to survive and not thinking of how to attack us.”

Dr. Boaz Ganor, a terror expert at the interdisciplinary center Hertzliya, raised the possibility of a common cause between the Islamic movements on both borders as a further reason for Israeli concerns about regional stability.