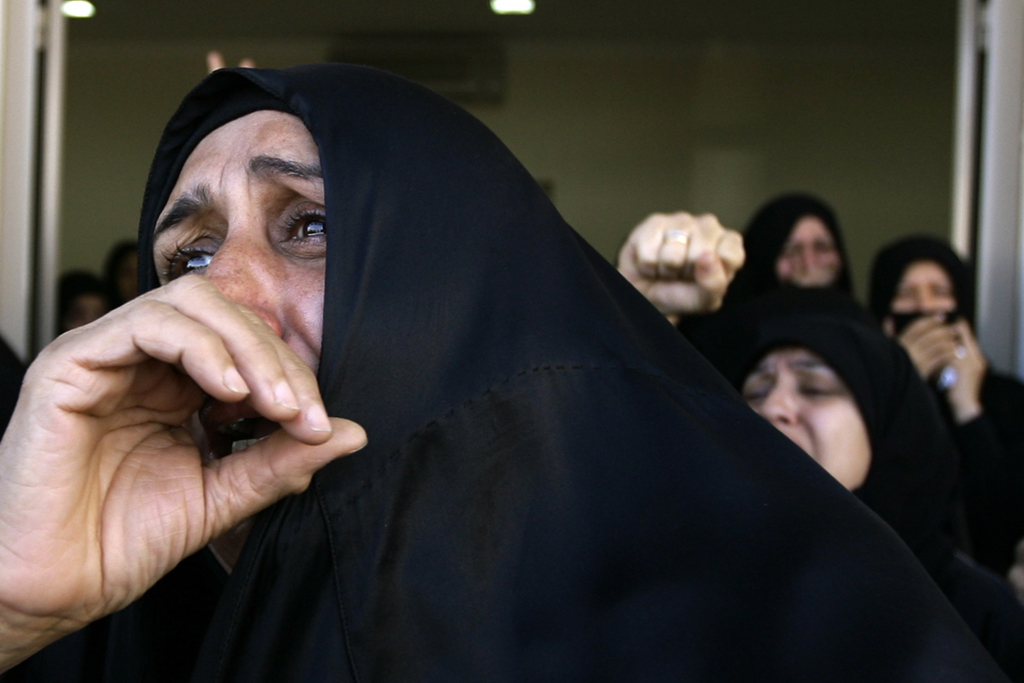 Bahraini Shiites women cry during Bahiya al-Aradi's funeral in Manama on March 22, 2011. Aradi, 51, went missing on March 16, and a car that she drove was found the day after in al-Qadam village, west of Manama, with bloodstains on the driver's seat. She was pronounced dead on March 21 after being shot in the head.
Credit: Joseph Eid
Share

NEW YORK — On the afternoon of April 12, plain-clothes security officials arrested Ghazi Farhan, a businessman, in his office parking lot.

They blindfolded and handcuffed him and took him to a detention facility, where officers interrogated him, beat him with a hose, and forced him to sign a confession that he had participated in anti-government demonstrations. Authorities kept Farhan in incommunicado detention for 48 days, and prevented him from meeting with his lawyer and his family to prepare his defense.

Today Farhan is having trouble sleeping. Until recently he shared a two-person cell in Jaw prison with a convicted murderer. On Aug. 6, after his family complained, authorities moved him to another cell. But as recently as July 27, Farhan asked his family to cancel a visit because prison guards were beating and harassing him, presumably to stop his wife from talking about conditions inside the prison.

Farhan’s case is typical of the hundreds of Bahrainis caught up in Manama’s campaign of retribution, which began on March 17. That is when security forces began their massive crackdown, targeting nearly everyone associated, however tenuously, with the anti-government protests in February and March.

It is this calculated campaign of arbitrary arrests, incommunicado detention, serious allegations of abuse in prisons, and show trials before special military courts that is at the heart of the rights crisis in Bahrain today. It is this reprisal campaign that Manama has tried desperately — and some would say successfully — to hide from world attention.

By most accounts, Farhan was not really involved in the protests and was instead busy running his businesses. Perhaps he was arrested because his wife, Ala’a al-Shehabi, was a familiar face at the Pearl Roundabout, the center of anti-government protests and activity for a month. And his father-in-law, Saeed al-Shehabi, is the London-based leader of an opposition group. (On June 21, the special military court sentenced Saeed al-Shehabi, in abstentia, to life in prison, along with seven other prominent opposition leaders and activists.)

On May 30, two days before King Hamad bin Isa Al Khalifa declared an end to martial law, a military prosecutor brought Farhan before a special military court and charged him with two counts of participating in illegal gatherings and one count of spreading false information. Both his wife and his lawyer met with him for the first time since his detention after the two-minute court session ended. On June 9, Farhan had his second court session. The court did not permit Farhan’s lawyer to meet with him to prepare his defense, but the judges did allow him to present three witnesses on Farhan’s behalf.

Twelve days later, on June 21, the court sentenced Farhan to three years in prison. His wife, who reviewed his case file, said the court convicted Farhan based on a two-line forced confession regarding his participation in protests, a Facebook printout with a highlight around the words “the people are demanding their freedom from the government,” and four messages he had sent from his private email to his work account that included YouTube links and pictures of anti-government protests.

Since mid-March, Bahraini authorities have mounted an aggressive public relations campaign aimed at advancing a narrative that focuses exclusively on what allegedly happened during the protest period between Feb. 14 and March 16 — and ignores everything that has happened since.

Officials obsessively harp on what they claim protesters did, the “human rights” they violated, and the crimes they allegedly perpetrated. Yet the majority of those sentenced by the special military courts were essentially convicted for speaking out against the government. This despite the fact that the crown prince had publicly stated at the time, on several occasions, that the demonstrations at the roundabout were not against the law.

Some protesters may have committed crimes of violence, and those who did should face justice. But most of those arrested, detained and put on trial were, like Farhan, denied a fair trial and are now sitting in prison, awaiting trial or convicted on politically motivated charges. Authorities say they will continue to try some of the detainees in special military courts after King Hamad issued a decree on Aug. 18 allowing these courts to retain jurisdiction over certain criminal cases.

The new decree seems to override an earlier one, issued by King Hamad in late June, which seemingly transferred all cases pending before the special military courts to civilian courts. Human Rights Watch opposes prosecution of civilians in these special military courts and believes that civilians charged with genuine criminal offenses should be tried in an independent civilian court that meets fair trial standards.

The Bahraini government has made some positive steps. An independent international commission of inquiry is looking into human rights violations associated with the period of unrest. Al-Wefaq, the largest legal opposition group, has held several large rallies without interference. And authorities have released a few hundred detainees during the past several weeks, though most are merely out on bail and charges have not been dropped.

But even the positive steps will count for little as long as people like Farhan remain unjustly imprisoned, abused, and deprived of their rights with impunity.

Except for the clearly excessive use of lethal force against peaceful protesters prior to March 17 that left seven protesters and bystanders dead and hundreds of others injured, the most egregious and systematic rights violations occurred in Bahrain after security forces violently suppressed the public protests.

To lose sight of this is to miss the mark on the rights crisis that is unfolding in Bahrain today. And squander the opportunity to provide real justice and accountability for the victims of this campaign of retribution.