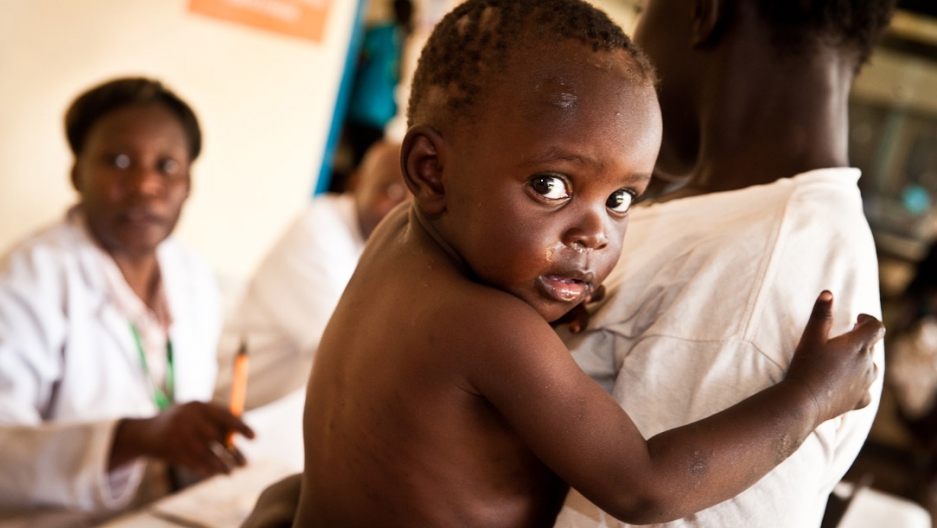 From Kisumu we drove to Siaya, about an hour away across the lush green and hilly landscape. Northern Kenya may be suffering drought but there’s no shortage of fertile land here.  Dark soil is churned up in freshly hand-tilled fields as the maize harvest has just been brought in and the farmers who make up the bulk of the population are preparing for the next rains.

The government-run Siaya District Hospital is surprisingly bucolic. There are tall, shady trees and birdsong. It is a well-organised place set in a large compound without the overcrowding that marks many inner city hospitals.

The busiest areas in the hospital are the antenatal clinic and the paediatric ward, which fits well with the Global Health Initiative’s stated intention to focus on mothers and children.

Here the priorities are dealing with HIV by trying to mitigate its effects and stop it being passed from mothers to children, and helping in the search for a vaccine for malaria which strikes many in the region— killing a disproportionate number of children whose immature immune systems are a poor defence against the parasite.

An HIV positive woman I met told me how she has been benefiting from both programs. As a result, her months-old baby girl is HIV negative and neither have suffered malaria.

Back in Kisumu town, the hospital is a more chaotic place; wards are close to full, staff are overstretched. Nevertheless we managed to find a quiet spot to sit with some HIV positive mothers under a tree.

They told me some terrible stories about being beaten and thrown out of the family home by husbands outraged that they had contracted virus, even though the husbands were often the ones having affairs.

The silver lining for all of the mothers was that, despite being HIV positive, they had given birth to HIV negative children and with the help of courses of anti-retroviral drugs they were without exception looking in good health.

Clearly health programmes are having an impact out here in western Kenya but how the announcement of GHI has affected those programmes is not so easy to discern.