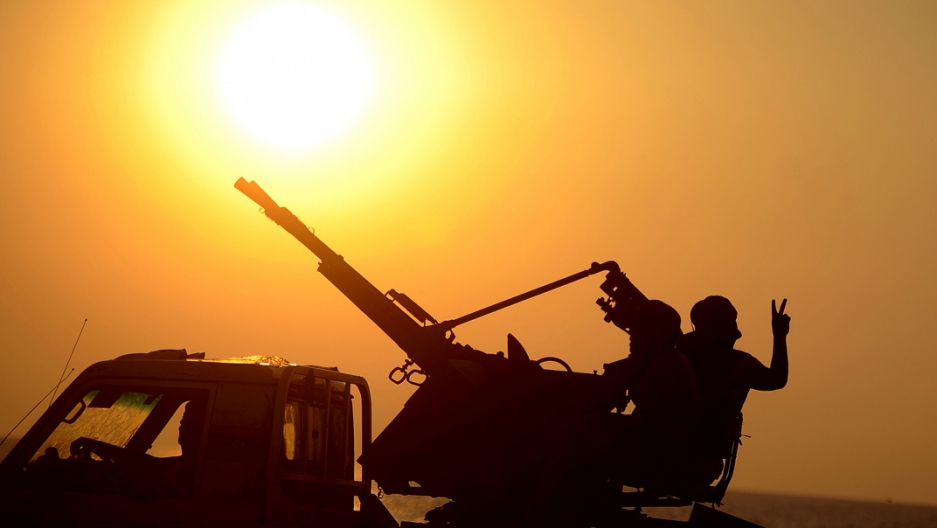 Libyan rebels flash the victory sign as they drive through a seaside road in Tripoli at sunset on August 26, 2011. Libyan rebels, who overran Tripoli a few days ago, are intent on finding Muammar Gaddafi so they can proclaim final victory in an uprising that began six months ago.
Credit: Filippo Monteforte
Share

TRIPOLI - Amid power cuts, food and water shortages and disabled communications networks, hundreds of residents in the Libyan capital emerged from their homes Saturday to enjoy the city's relative calm and to hunt for supplies.

Gun battles raged through the night as the rebels secured the capital and NATO planes circled the city.

The daylight brought relative calm, but fighting continued around the airport, which is still held by loyalists to Muammar Gaddafi.

Tripoli residents celebrated the imminent victory over Gaddafi as the doors to the dictator's Bab al-Aziziya compound were opened to civilians for the first time.

Men, women and children gathered in celebration despite the bloated bodies that lay strewn along the roadside. Green flags of the Gaddafi regime still hung high as men danced to rebel songs blaring from a car radio. Children played in the ruins of Gaddafi’s former bedroom. Guns were fired into the air.

“This is Gaddafi’s house, but where is he?” asked Tripoli resident Tarek Al Teriki. “Like a big rat he has gone underground.”

One man, dressed in a lavender gown from Gaddafi’s personal collection, gave a mock speech from the platform famously used by Gaddafi and crowds cheered and laughed at his imitation of the former dictator.

A woman cried from the balcony, “I want him to see his children die in front of his eyes, as we have seen our children die.”

Amid tears another woman interjected, “He killed my brother in Abu Salim. He killed my uncle. Enough! Enough! I cry but my tears are also of joy because soon he will face justice.”

Where the former dictator and his family are remains unknown, but rumors continue to circulate that the rebel forces have him cornered.

Residents expressed confidence he was still hiding within the capital, saying his stubborn character would never allow him to retreat. As many discussed his whereabouts, others revelled in a newfound freedom.

“I feel like a bird that has been freed from my cage after 42 years,” said Akram Al Teriki, 34, as he walked through the ruins of one of NATO’s bombing raids. “For 42 years we were trained to be afraid; afraid to speak out even among our own family. If I spoke to you these things even a few days ago I would have never seen the sun again, but now we are free. We cannot stop talking.”

As the people of Tripoli rummaged through his home, Gaddafi released a statement from his hiding place, calling on Libyans to "leave their homes and liberate Tripoli."

The rebels National Transitional Council has offered a $US1.7 million reward for the capture of Gaddafi, dead or alive, and an amnesty to any members of his inner circle who kill or capture him.

But not all were celebrating in the streets of central Tripoli.

“We just want NATO to stop,” said one man who asked to remain anonymous. “NATO killed my entire family. We just wanted them to go. We didn’t want any of this. Our city is being destroyed.”

Food shortages have made preparations for the upcoming Eid Al-Fitr celebration that traditionally ends the Ramadan fast difficult, and as the fighting families are still living in fear.

Hamida Misrati, mother of eight, also spoke of hardship while making her way home empty handed from the market.

“This is my last dinar,” she said, holding the note above her head, “and I can’t even spend it because there is nothing to buy.”