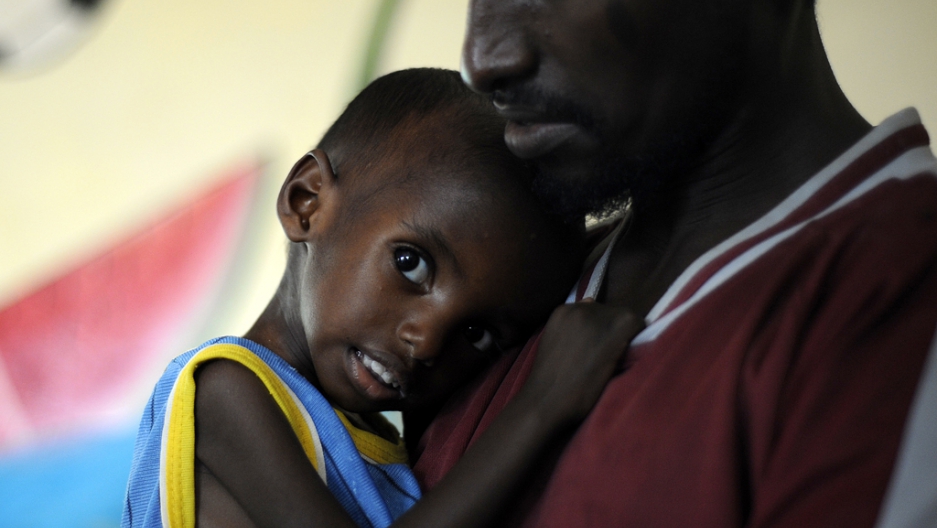 Aden, a three-year-old Somali refugee with his father Abdille, recovers at the stabilisation centre at Hagadere refugee area. An estimated 3.7 million people in Somalia - around a third of the population - are on the brink of starvation and aid agencies are stretched in trying to cope with a daily influx of Somalis escaping not only drought but the al-Shabab extremists.
Credit: TONY KARUMBA/Stringer
Share

A sharp increase has been recorded in the numbers of desperate Somali refugees risking their lives in often overcrowded and unseaworthy boats to cross the treacherous Gulf of Aden to Yemen fleeing violence and famine back home.

They arrive in one of the hungriest countries, with the third highest rates of malnutrition in the world.

Already 3,700 Somali refugees have reached the coast of Yemen so far in August alone making it the highest monthly arrival rate this year, according to the UN agency for refugees, UNHCR.

The arrivals also mark an earlier than normal start to the traditional peak season for smugglers' boats to arrive from the coastal town of Bossaso in northern Somalia.

The refugees are crossing what aid agencies have termed “the world’s most dangerous refugee route”, fleeing “the unstable security situation, severe drought, high food prices and lack of job opportunities,” they tell UNHCR.

“It is testament to the refugees' desperation that they have chosen to flee to Yemen, which is itself affected by serious unrest,”  said UNHCR spokesperson Adrian Edwards on Friday. “They cross the Gulf of Aden on what are often unseaworthy and overcrowded boats. Many do not survive the dangerous crossing. On Monday, two Somalis drowned when their boat capsized.”

Read: Somali refugees flee one hell for another

Yemen, which has seen growing unrest since the beginning of the uprising in the beginning of 2011 and a worsening humanitarian situation, hosts the second-largest population of Somali refugees in the region, numbering nearly 192,000 people. Some 15,000 of these have arrived since January, according to the UNHCR.

Numbers of Somali refugees seeking humanitarian help have declined in neighboring Kenya, which houses nearly 498,000 Somali refugees, from 1,500 arrivals per day to 1,000-1,200 people per day.

A significant drop in internally displaced people inside Somalia has also been reported by UNHCR's Population Movement Tracking (PMT) partners who say that the number of displaced people arriving to Mogadishu, the country’s capital, fell from 28,000 in July to just over 5,000 this month. That is a drop from more than 1,000 arrivals per day last month to an estimated 200 in August.

The UNHCR believes that more Somalis are expected to arrive in Yemen in the coming months. “We believe many who fled their homes are already waiting in Bossaso for calmer seas before starting their journey,” Edwards said.