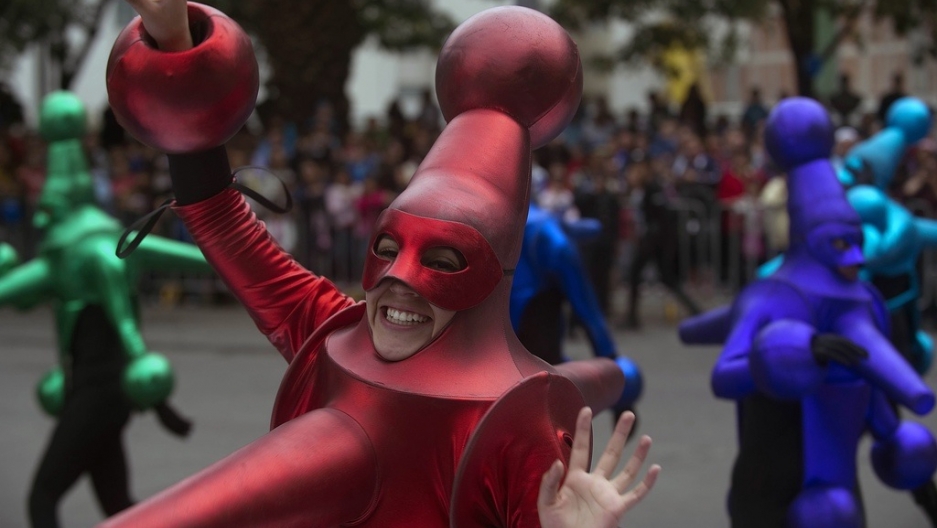 MEXICO CITY — The daring adventurer leaps off a cliff, dives in underwater caves and scales a Mayan pyramid.

But the man in the commercial isn’t an extreme-sports nut. “His name,” the voice-over booms, is “Felipe Calderon. And he is the president of Mexico."

The president’s adrenalin-pumped antics are part of a new effort by his administration to rescue Brand Mexico and the valuable tourist dollars spent by Americans and other foreign visitors.

The push underlines how important gringos tanning on Cancun’s white beaches are to the nation’s economy.

Tourism provides Mexico with its third biggest source of foreign currency, after oil exports and the remittances sent by Mexicans toiling in the United States.

But the industry has been threatened by news of Mexico’s bloody drug war, with reports of severed heads and mass graves.

GlobalPost in Mexico: Protesters are fed up with violence

While in the first six months of 2008 — the peak year for tourism — holiday makers spent $7.3 billion, in the same period this year they only dished out $6.2 billion. The billion-dollar difference could mean the loss of thousands of jobs in key tourist spots.

So Calderon has gone on a charm offensive.

His government has declared 2011 to be Mexico’s year of tourism, pumped out an advertising campaign and organized a series of fairs to lure visitors.

But his most visible effort has been the television series he’s filmed with CBS News, “The Royal Tour.” The concept: Calderon gives Peter Greenberg, CBS News’ travel editor, a tour of Mexico’s most exotic sites.

In the series, which airs in September, the pair travel under the watchful eye of federal helicopters. Calderon extols the beauty of Mexico and brushes off concerns about drug violence.

“Let me tell you that the problem of violence is more related with the battle between one gang to another,” Calderon assures Greenberg in one clip. “It is drug-trafficking related. It is not related with tourism.”

To be sure, other factors have hurt the tourism business, including the swine flu epidemic in Mexico in 2009, and most importantly the worldwide economic slowdown.

But the drug war has made many American tourists in particular fear that violence in hotspots such as Ciudad Juarez means all Mexico has become a perilous war zone.

Marc Murphy, managing director of the tourist board of Riviera Nayarit on Mexico’s Pacific coast, said that part of the problem is the American media, which often tars all of Mexico with the same brush.

“You see Anderson Cooper cross the border into Ciudad Juarez in a flak jacket, and it looks like the whole country is like that,” he says. Murphy says his board drills executives on the 10 answers they should give people who question whether Mexico is safe for tourists.

“The first thing I say is that 22 million other visitors can’t be wrong. They all come here and have a great time, and nothing bad happens to them," he said.

Calderon has also pointed a finger at news coverage. He argues that none of the 40,000 people murdered in the drug war since he took office in 2006 have been foreigners sunning themselves at resorts.

Calderon’s domestic critics say that his focus on courting tourists belittles the frightening violence that many Mexicans face. And it distracts the government from confronting the problem.

Calderon’s foray into television, meanwhile, has largely been met with derision by Mexicans who have watched the ad for “The Royal Tour” on YouTube or television. When the clip was played on a popular radio news show this week, the listening journalists and academics scoffed in anger.

“It is as if there are no problems in this country,” said politics professor Sergio Aguayo, “and Calderon can calmly enjoy being a tourist guide.”