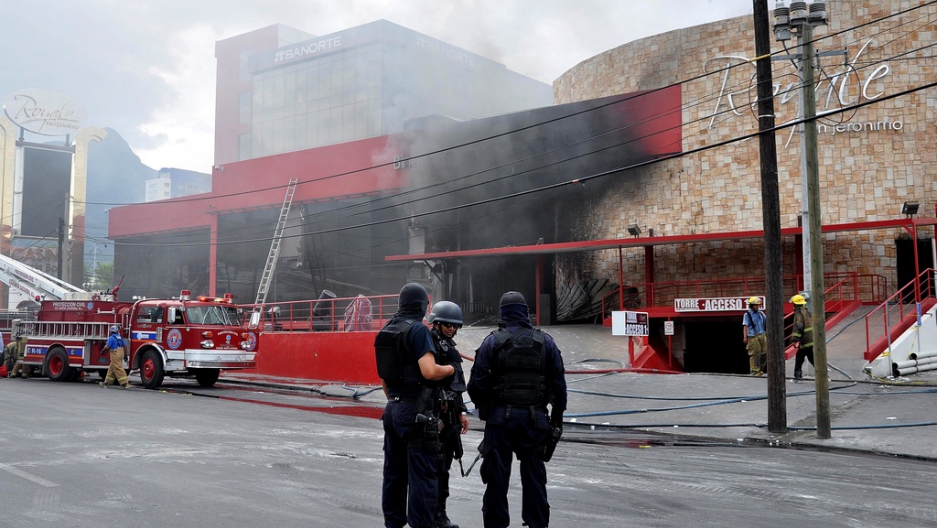 The Casino Royale after the attack.
Credit: AFP
Share


Just five years ago Monterrey advertised itself as the safest city in Latin America. Now, it's looking like one of the region's most violent.

Monterrey has endured a series of massacres and assasinations this year. The latest attack on the popular Casino Royale on Thursday was particularly shocking, as most of the victims appeared not to be linked to any drug cartels.

It came as particularly bad timing for President Felipe Calderon, who has hoped to rescue Mexico’s battered image by filming a travel series with CBS.

“It is evident that we are not confronting ordinairy criminals,” he said in a televised speech. “We are confronting true terrorists who have gone beyond all limits.”

Media reports said that gunmen had poured gasoline on the carpets, then lit the fire. As the flames spread, victims fled to bathrooms and stairwells, where they died of asphyxiation from the smoke, burns from the fire, or were crushed by the stampeding.

At last count, at least 52 people had died.

The government offered $2.6 million for information that will help capture the culprits.

But officials confessed on Friday that they still no idea why criminals would massacre civilians in such a way.

The attackers may have hit the casino because the owner had some link to a rival gang, or because the business fell down on its extortion payments, which are generally required for businesses operating in drug-controlled areas.

Or, they might simply have targeted civilians to make a bigger, newsy splash. And they did.

In the propaganda war for Mexico’s image, it seems like the drug cartels keep coming out on top.