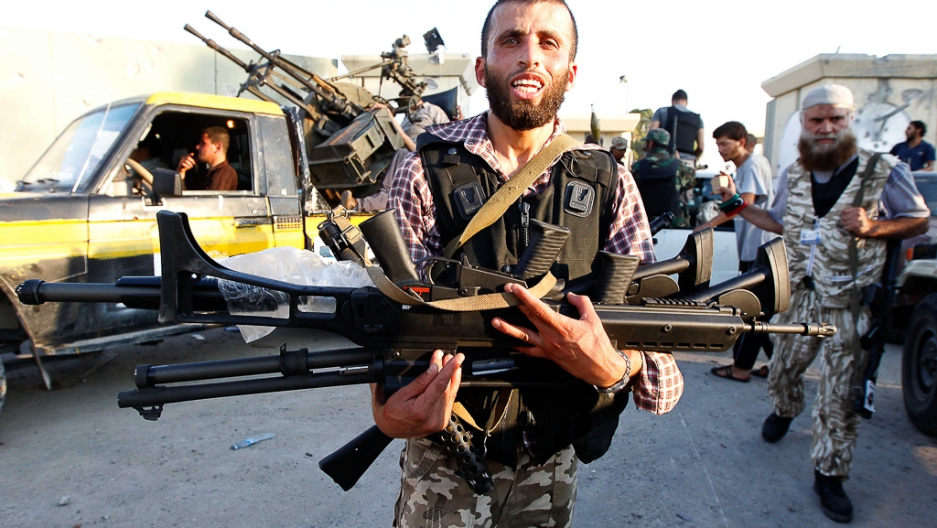 BENGHAZI, Libya — As night fell over the port of Benghazi, rebel fighters guarding the city's lone naval base seemed eager to take part in the raucous celebration of gunfire and dynamite explosions happening across town.

The young men sitting near the quiet dock, after all, have a much bigger arsenal at their disposal.

Bobbing in the water are two aging Soviet-era Nanushka-class frigates armed with missile batteries, torpedo tubes and massive 75-millimeter cannons on the front and aft decks. An anti-aircraft gun is also mounted just above the front gate.

Instead, the guards reached for their Kalashnikov rifles and burst a few rounds off into the sky, for no apparent reason other than the fun of it.

"They are just testing the guns. You know, to see if they still work," said Col. Mahdy el-Maghrabi, one of the rebel naval commanders in Benghazi.

Rebels in the "New Libya," as leaders here have already, perhaps prematurely, started referring to the post-Gaddafi era, have inherited an enormous stockpile of firepower from the old Libya. And even though fierce fighting still rages in sections of Tripoli and on the eastern front, a total rebel victory might lead to gains of even more weaponry.

Western governments, including the United States, are beginning to worry about possible proliferation of Gaddafi's weapons of mass destruction, in the event the regime collapses completely.

But with major rebel military operations in Libya winding down, as leaders here constantly assert, another worry in Benghazi is the increasing numbers of light arms flooding the streets — especially the ever-popular AK-47 rifle.

"We need to start thinking about how to get these weapons back into government control," said Adel Khalifa Ali, director of the Benghazi-based Crisis Management Center, a private consulting company that has done some work for the rebel authority, the National Transitional Council (NTC).

"Getting weapons off the streets will be very important for the safety of citizens and the overall security in Libya," he said.

Owning a firearm was illegal during Gaddafi's four decades of rule.

These days, however, rarely an hour passes in Benghazi, the de facto rebel capital, without hearing the piercing crackle of automatic rifle fire in the distance.

Nightly celebrations here have been punctuated by near-constant machine gun fire (as well as the occasional detonation of fishing explosives).

Though Belgian and German-made rifles have been spotted in eastern Libya, the weapon of choice — from volunteer police officers to average citizens — seems to be Russian or Chinese-made Kalashnikovs. The wildly popular AK-47, of course, is not difficult to obtain, for the right price.

Ayman Drussi bought a Kalashnikov from a rebel fighter who returned from the front lines with a mini-stockpile of guns several months ago. Purchasing the rifle, he said, was "extremely easy."

"There are no laws here anymore. Everyone here has a gun," said Drussi, 31, a resident of the working class Oheishy neighborhood in Benghazi.

Most of the guns on the streets come, indirectly and perhaps ironically, from Gaddafi's old bases of power in the east.

In the early days of the February uprising, protesters looted police stations, military bases and other weapons caches from Benghazi to Tobruk. Residents near Benghazi's massive Katiba army barracks, which was stormed in late February, described the proliferation of weapons over the base's walls as a "free-for-all" for anyone on the scene.

Nagy Khamis, a 22-year-old volunteer security guard, made off with an AK-47 from Katiba. He also took an Italian-made Beretta pistol.

"When we got to Katiba, the weapons stores were packed from the ground all the way up to the ceiling," Khamis recalled.

Many of the weapons "discovered" in eastern Libya — from light arms to rocket-propelled grenade launchers to actual tanks — have been shipped to the front lines, either by boat to Misrata or trucked to the east, for use by the rebel army in their fight against Gaddafi loyalists.

But a number of guns remained on city streets. And many residents in Benghazi are starting to complain about the subsequent spike in crime.

Most notably, the former rebel army general, Abdel Fattah Younis, and two of his aides were mysteriously gunned down by an unknown armed gang in late July.

Family members of an official of the ruling NTC were assaulted before their car was stolen by armed "thugs" just this week. Also, a Western journalist was beaten and robbed at gunpoint by two men in a Benghazi hotel this month.

With Gaddafi's rule now appearing all but over, Western governments are beginning to worry about mass-proliferation.

Their fear is that prolonged chaos in Libya would give militant groups like Al Qaeda the opportunity to purchase or steal from Gaddafi's stores of weapons of mass destruction — grad missiles or even chemical agents, like mustard gas.

"Ensuring that we have a full accounting ... of any WMD or any security assets that the state might have had ... will obviously be a priority for everybody," said Victoria Nuland, a spokesperson for the U.S. State Department, at a press briefing on Tuesday.

Light arms, however, could be just as destabilizing to a nation that needs time to recover from months of civil war.

Shamsiddin Abdulmolah, the director of media and communications for the NTC, said a plan is in place to start collecting weapons from the streets of Libya "soon."

Though he admitted that gathering light weapons like Kalashnikovs would take more time in places like Benghazi because of the inadequate records kept of serial numbers and names of gun owners in eastern Libya.

"We may start a buy-back program to entice people to return the weapons they have found or were given," Abdulmolah said.

Most rebels said they would be eager to voluntarily hand over weapons to the NTC, but only once Gaddafi is captured and brought to justice.

Not everyone, of course, will be so willing.

Khamis, the security guard, said the guns he took from the Katiba barracks have become symbols of his "personal bravery" during the uprising. Khamis grudgingly admitted that he would return the pistol if asked by authorities.

"It was my right to take these weapons from Gaddafi in the first place," Khamis said. "I'm going to keep the Kalashnikov for the rest of my life."