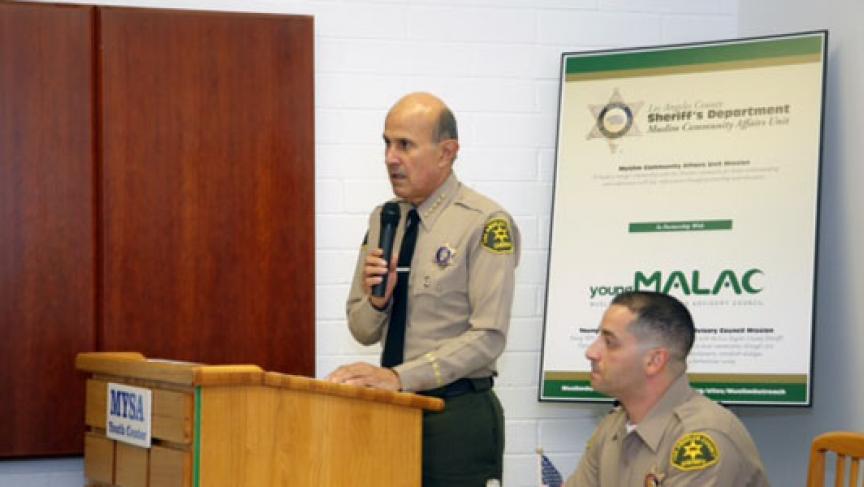 Share
By Ruxandra Guidi On a warm weekday morning, a group of businessmen, residents and a deputy sheriff met for coffee and eggs in the basement of a mosque near downtown Los Angeles. They call themselves the Muslim American Homeland Security Congress; they are locals who want to shape the way counter-terrorism work is done in their community. On the agenda was an invitation to Los Angeles County Sheriff Lee Baca for Ramadan services. Baca is widely respected here. He founded this group six years ago. "Someone has to stick their neck out to defend Muslims," Baca said. Since the attacks of September 11, 2001, Arabs and Muslims around the country have felt the scrutiny of authorities. While many law enforcement agencies have increased surveillance of the Muslim community, Baca has chosen a different approach. Sitting in his office in East LA, surrounded by souvenirs from his travels to Middle East and China, Baca explained his reasons for bringing together the Muslim American Homeland Security Congress. "We wanted to get ahead of the predictable problems that all counties face in America, and that is, work closely with the immigrant public, which is a very big part of LA." Days after 9/11, Baca began reading the Qur'an. He also started meeting with Muslim shop owners and asking them to report hate crimes. He assigned seven Muslim police officers to a Muslim Community Affairs Unit to keep tabs on what happened in mosques and neighborhoods. "Post 9/11, the business owners who were most concerned about potential backlash were Pakistani-Americans," he said, adding that the community includes Muslim Americans, Arab immigrants and more. "So my desire was to learn quickly as to how we can multiply our effectiveness in our local county area." Meanwhile, the community's relationship with federal authorities began to deteriorate. Hussam Ayloush, director of CAIR, the Council of American Islamic Relations in Southern California, said Muslims here in LA have felt targeted by the FBI. "We were seen as 'prove to us you're innocent, prove to us you're good Americans'. And unfortunately, that's how the FBI started their relationship with Muslims, right after 9/11," he said. The FBI's LA office said it does not investigate people based solely on religious affiliation. In South Central LA, Imam Abdul Karim Hasan oversees a mosque catering to immigrant and African-American Muslims. Hasan said Baca stands out in his efforts to defend civil rights. "If one brother commits a crime, you don't arrest the other brother," Hasan said. "Everyone is responsible for their own acts. And that's what makes Baca stand out a little more, I think, than some of the other politicized people." Not everyone appreciates Baca's stance. This March, Baca testified before Congress at hearings examining Muslim radicalization and he found himself on the defensive. Minnesota Republican Congressman Peter Cravaack challenged Sheriff Baca's association with CAIR–calling the group a terrorist organization. But back in his L.A. office, Baca defends his work with groups like CAIR. He said his support for the Muslim community stems in part from a curiosity about other cultures. "Since September 11, I've travelled to Muslim nations at their request, and they have paid for my travel. I've been to Russian police organizations, Far East police organizations, I've been to Pakistan, China, and Turkey," Baca said. "I think if you want more world peace, you probably should spend less on military and more on public safety."