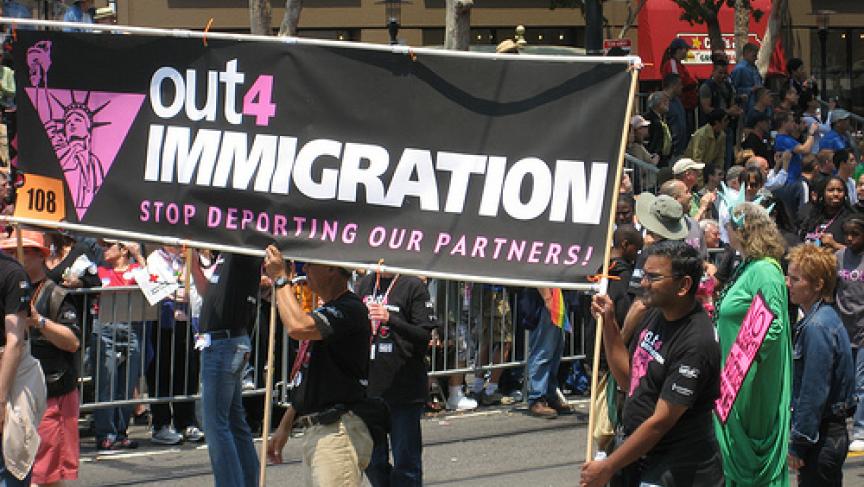 GLBTQ group denounces targeting of partners who have been deported at 2008 rally. (Photo by Flickr user lewisha1990)

Story by Monica Campbell, PRI's The World. Listen to audio above for full report.

Last week's decision by the Obama administration to have deportation policy focus on criminals rather than law-abiding immigrants may ease many families' legal worries. Yet the outlook for some families, especially same-sex couples, is still cloudy.

In San Francisco, one gay couple wonders whether the new rules will offer any reprieve, especially as long as a federal law that denies rights to same-sex marriage remains in place.

The couple's romance started 19-years ago in a cafe in Sydney. That's when Anthony Makk of Australia, met Bradford Wells, a tourist from San Francisco, after a Mardi Gras party.

Before long, Makk moved to San Francisco to be with Wells. Seven years ago, the couple married in Massachusetts. They now live in San Francisco, in a Victorian house filled with art, two dogs, and a garden filled with tomato plants.

But Wells, 55, has AIDS and his health is deteriorating. Today, he’s too weak to work. Makk is his husband's sole caregiver.

Now the couple faces another battle -- over deportation. The federal government doesn't recognize the couple's marriage.

Makk has maintained his legal status over the years through a variety of visas. But his options have run out, and immigration officials have denied his green card application.

The Obama administration's new deportation policy may not help Makk's case. While the new policy recognizes same-sex couples as family, it only applies to people already tangled in the deportation process.