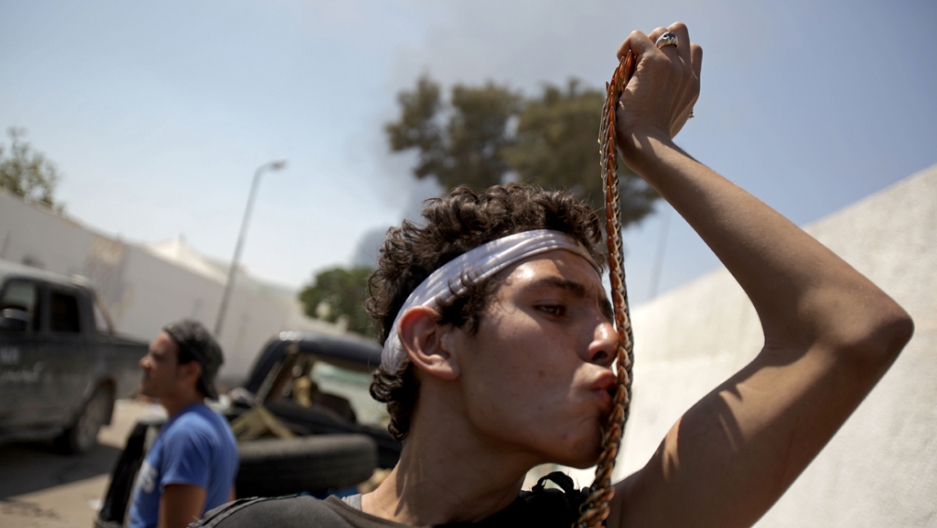 A Libyan rebel kisses a bullet belt at the Bab al-Aziziya compound in Tripoli on August 25, 2011.
Credit: PATRICK BAZ
Share

TRIPOLI, Libya — Amid celebratory gunfire and cries of “Allah Akbar,” the Sheehad Ahmed Hawas brigade, the first rebel fighting group to be sent from Benghazi, arrived in Tripoli by ship on Thursday.

The 36-hour journey had not been a smooth one. But bouts of seasickness, Ramadan fasting and long delays did not dampen the spirit of the rebel forces as they arrived to share in the final fight for the country's capital.

"We have come to help the people of Tripoli and to catch Gaddafi," said brigade commander Anwar Youssaf Migarluf.

On board, rebel fighters napped on top of ammunition boxes. Some chewed on sticks to ease the Ramadan fast. Others prayed and read the Koran, sheltering from the scorching sun under hanging blankets and plastic sheets.

As a pink sun sank below the horizon, milk and dates were served to break the day's fast. Revolutionary songs and laughter filled the night. One man played guitar, another kept the rhythm drumming on fuel tanks.

The ever changing security situation in Tripoli caused several delays to the trip. Rebels first announced Sunday night that they had captured two of Gaddafi's sons, Saif and Mohammed and that 80 percent of the city was said to be under rebel control.

As the two tug boats were loaded with rebels and weapons to leave the port on Monday, news filtered through that both claims were untrue. From the center of Tripoli, Saif Gaddafi announced the rebel advance had been a trap and that government forces had "broken the backbone" of the revolution.

Late Tuesday, the fight again swung back in favor of the rebels and NATO gave the all clear for a safe sea passage.

"We have been waiting for this moment for a long time," said 52-year-old Migarluf, who first joined the Libyan resistance against Gaddafi as a teenager. "For 32 years Gaddafi took my life, my happiness, everything. Now I am free. This is a new life for all Libyans."

Migarluf, whose family is famous for their resistance against the Gaddafi regime, said that two of his brothers played a key role in the first major uprising in Libya in 1985. He has trained with anti-Gaddafi forces in both Sudan and Baghdad. Days before the revolution he arrived in Tripoli to negotiate the release of his brother, Azat Migarluf, and other revolutionaries, before escaping to Benghazi to join the revolution. Thirty-eight members of a Gaddafi resistance group were released, but Migarluf's brother remains in prison.

Many others onboard were anxiously waiting to search for relatives captured by Gaddafi forces. One man spoke of finding his imprisoned brother, another of a reunion with Matt Van Dyke, an American freelance journalist who spent six months in a Tripoli jail before escaping earlier this week, he had befriended in Benghazi before his capture.

Migarluf said an estimated 45,000 people remained in Tripoli prisons when the rebels entered the capital.

Mofta Ahmed Alsharam had plans for a surprise return to his family home in Tripoli. He served as a government soldier in Benghazi before defecting to the rebel forces and has been separated from his parents and 12 siblings ever since. In early March, he lost his leg while fighting in Ras Lanuf, a city near Benghazi that was again the scene of heavy fighting Thursday between rebels and loyalist soldiers.

"I missed my family so much," he said as he made his way across the deck on crutches. "I'm going there to surprise them. This is best the feeling."

Migarluf said Libyan security records listed 392 attempts to overthrow the Gaddafi regime. Success has finally come, he said, because all Libyan people have been affected by his reign. “Everyone wanted change,” he said.

Mohammed Abdullah Busedra, a rebel fighter who was previously a chemical engineer by trade, agreed.

"In my opinion, this is the best revolution in the world because it started in all our hearts, not with our guns," the 51-year-old from Benghazi said. "We will fight until every city is clean. And then we will go home."

Despite the recent success on all fronts, the battle is not over yet. Gaddafi loyalists still fight in pockets across the capital and Gaddafi and his sons are yet to be found. But Migarluf expressed confidence that a full victory would be theirs within the week.

"These feelings have been forced underground for 42 years. Now everything is free," he said. "The smile has returned to Libya."